We Come in Peace 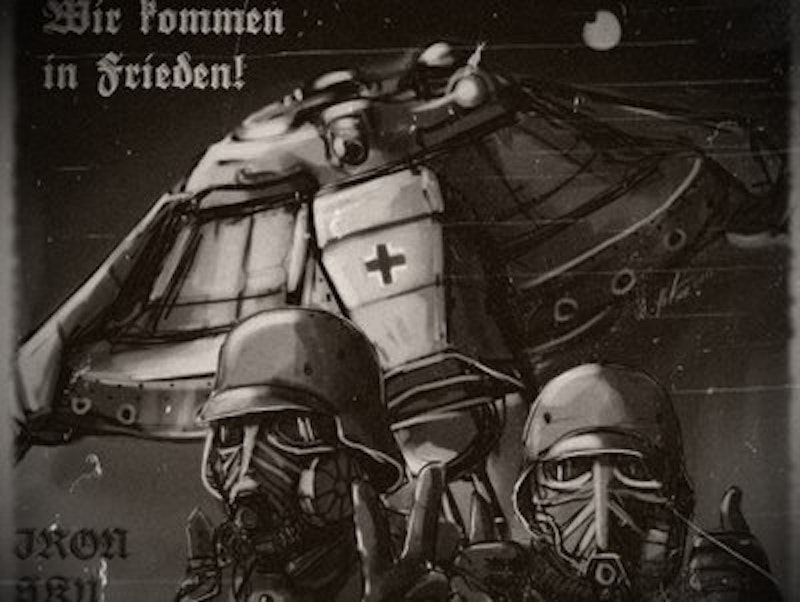 If you call someone a Nazi long and loudly enough, they may begin to believe you. For some reason, this obvious lesson is lost on organized Jewry, feminists, the race relations industry, and the LGBTQ crowd. My own experience bears this out. I always thought of myself as a Constitutional Fundamentalist. My opposition to the Vietnam War was based primarily on the fact that it was an illegal executive action, in direct contradiction of the Constitutional delegation of authority to declare war to Congress. I believed in equal justice under the law for all citizens. I was an Equal Rights Amendment feminist. I was sufficiently supportive of women’s right to choose that I hit the streets of Manhattan during the 1992 Democratic presidential convention there to prevent the execrable Randall Terry’s Operation Rescue from closing down any abortion clinics. We won that one, spectacularly: Terry’s thugs only managed to shut down one clinic in the whole town, a fertility clinic. Out of sheer desperation, Terry himself ran up alongside Bill Clinton while he was jogging in Central Park and flashed what he claimed was an aborted fetus in a plastic deli take-out container (“Can I get that to go? Skip the fries.”), thus alienating every single Roman Catholic supporter of his cause and fracturing the anti-choice crowd beyond repair.

I’d always been opposed to Nazis and other perceived racists in principle. I believed the Jewish narrative of historical victimization, and I believed in the equality of the races. I took enormous pride in having been run out of Northern Idaho in 1974 by the nascent Aryan Nations crowd, who declared me a “race traitor” for suggesting that they didn’t know fuck-all about Jews or blacks since there weren’t any within a 500-mile radius of Priest River. I left in a hurry in the middle of the night.

Things started to change in 1993, when I came to the defense of the free speech rights of a Nazi on a BBS system called Echo in NYC. I wasn’t agreeing with him, merely pointing out that sunlight is the best disinfectant, and the best way to deal with so-called “hate speech” was not to stifle or censor it, but to refute it, logically, step-by-step. It amazed me how the Jews marched in perfect lockstep to get this guy banned. They accused me of anti-Semitism and Nazi leanings merely for suggesting dialogue and for pointing out that Jews are no different than anybody else. I didn’t know it then, but the suggestion that the Chosen are no better than the Goyim is very definitely an anti-Semitic remark. To the Jews, that’s like saying that a Maserati is no different than a Yugo.

When I started writing for NYPress in 1996, I took every opportunity to point out the similarities in substance, if not style, between the Third Reich and the Jewish State. The racial hygiene laws are nearly identical, and Israel adheres much more closely to Jabotinsky’s fascist model than Herzl’s softer socialist ideal. The ethno-settler state is a 19th-century relic, already thoroughly discredited and obsolete by the mid-20th century. I was ahead of the curve on the subject, and got a lot of hate mail.

In 2003, I wrote a piece for CounterPunch in defense of notorious Holocaust denier Ernst Zundel. I took no position on the veracity of his claims or the Holocaust narrative itself, I merely pointed out that firebombing a man’s house and hauling him into court repeatedly over his opinions on historical matters goes against every standard of civilized Western behavior. The Holocaust is the only historical narrative protected by law. That’s highly suspicious.

The article only appeared in the print edition, but it ignited a firestorm. Jewish donors threatened to withdraw all support from CounterPunch, and I got death threats from persons purporting to represent the JDL (Jewish Defense League). Ironically, I was living in a predominantly Orthodox Jewish building in Washington Heights at the time, holding the doors and pushing the elevator buttons for them on their Sabbath. They returned the favor by spitting on my girlfriend in the street for wearing a sleeveless dress on Saturday. My JDL callers, frustrated by my willingness to engage in armed combat, threatened my two cats. “How’d you like to come home to those two cats hanging dead in the closet, eh, Nazi?”

My response was immediate. “You know where I live, Jewboy. I’ll take out five of your kids for each cat with my Glock before I even get to the front door of the building.” The threats stopped after that. I left New York in 2005.

Things have come a long way since then. Not only do I refuse to apologize for being born a white gentile male, I celebrate it. Feminism lost its way a long time ago, and George Soros has inadvertently revealed the anti-white Jewish agenda behind his immigration program and the Black Lives Matter bullshit. The Alt-Right is absolutely correct: “diversity” is a code word for “anti-white.” I vigorously support Holocaust studies: the more closely you look at it, the more absurd it becomes.

David Duke is right: white people are a minority on this planet, rapidly becoming a minority in our own homelands. It’s time we started organizing like a minority. It’s time to make Europe white again. As far as America is concerned, it will suffice to derail the Jewish neocon effort to drag us into a war with Russia. We can deal with the finer details later. It doesn’t matter if Trump wins or loses. The Overton Window has been shifted. What was previously unspeakable has now become acceptable. We will prevail. History is on our side.