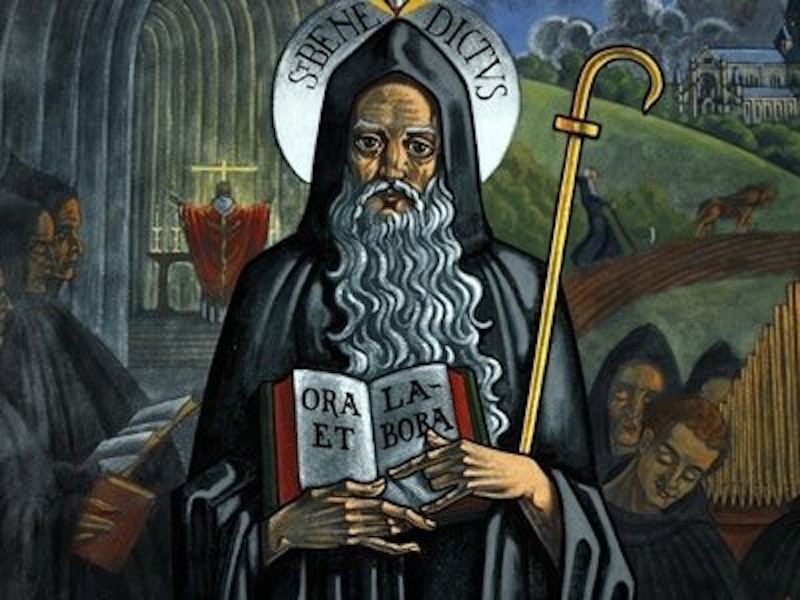 An amusing incident took place this morning at the hardware store, where I purchased a case of the work gloves that Mother favors when I set her to the noble work of weeding our Organic Acre in the blazing glory of the July sun.

The clerk at this store—one of the few small businesses left on our depressed Main Street—is a fine young man of Methodist background. He has been curious about my conversion to Russian Orthodoxy and so we often share probing conversation about religious matters. We even have plans to repair soon to the eastern Indiana woods for a weekend camping trip, just the two of us, sharing my tent, so that we can discuss the fine points of his evolving Christian witness.

On the day in question our talk turned to politics, as it does these days. My young friend said with bitterness that he feared the “dynastic restoration” we were about to see in the political sphere.

I become exercised. I began to insist that a “dynastic restoration” was exactly what was needed; that the Romanov dynasty had been mandated by Heaven to rule All The Russias in harmony with the Word; that Mr. Putin was aware of this, and had dedicated his reign to readying Russia (socially, spiritually, mentally) to welcome the return as Tsar of one of the living Romanov princes. For it is written in the Apothegms of St. Nestor the Sloven, Moron-for-Christ of East Volgograd:

The Master prepareth the soil

So that it accepteth the rigid stamen.

My clerk friend, taken aback, informed me that he was talking not of the Romanovs or of Russia, but of our own United States; and that the restoration he had in mind was not that of the Romanovs, but rather of Hillary Clinton, to the White House this fall. You can imagine my embarrassment. I had drawn attention with my outburst—other customers were staring at me! But I have always found that a sense of humor is key to surviving this fallen world; and so I excused myself with a sickly laugh, and slunk from the premises with all haste. I must say that the looks I received from my fellow customers in the store were not unlaced with contempt. Since I am in no way contemptible, I ascribe these rustics’ ill will to their bigotry. It is as if they have never set eyes on a Russian Orthodox before.

Scott McConnell, the paleocon thinker who helped found The American Conservative, is interviewed by anti-Israel militant Philip Weiss (“one of the good Jews” in the witty words of Brother Aiden, my partner in the Benedict Option). The exchange is filled with the gems that only these two quality minds could produce.

I beg you to read the whole thing, but I am particularly impressed by, besides, McConnell’s distrust of Israel, his repetition of the essential fact that the Ukrainian Maidan uprising of 2014 was, far from the popular revolution the Zionist media here in the West described it as, in fact a “coup” plotted by the US (in particular, though McConnell does not mention her, by the State Department neo-con witch Victoria Nuland, whose original family name, was, provocatively, “NUDELMAN”).

McConnell, a learned Anglo-Saxon, seems apparently to know that the Ukrainians, a sullen idiot race, are incapable of taking historical action in the absence of cunning and secret Zionist manipulation. That the Ukrainians are the fetid, dirt-like object of history, never the subject. That God in His wisdom put them on earth to be acted upon rather than to act. That they collectively represent a sort of human subsoil, a substrate, a dark filth, inert and meaningless, significant only inasmuch as they can be yoked and exploited to worthwhile ends by superior peoples, such as the Russians, the Germans, and indeed the Anglo-Saxons, were it to come to that.

McConnell simply knows more about Ukraine and what happened there than anyone else. He knows more about what happened in Ukraine in 2014 than, in fact, the subhuman Ukrainians themselves do; he has his own, parallel and superior, facts. I must assume that his facility in the Slavic languages, and his ability to read Slavic-language sources, is equal to that of his colleague Daniel Larison—and of the admittedly linguistically capable whore/propagandists Julia Ioffe and Anne Applebaum.

O the glory of the rye! How it burgeons in our Indiana fields! O russet gift of heaven, how you plumpen! Glory, glory! O chubby rye, warrant of the goodness of God the Father (Logos)! In you, and in the other good things of the earth, we rejoice, and for you we give thanks! With gratitude we approach thee with our scythes! We gather unto our hearts your fragrant bounty!