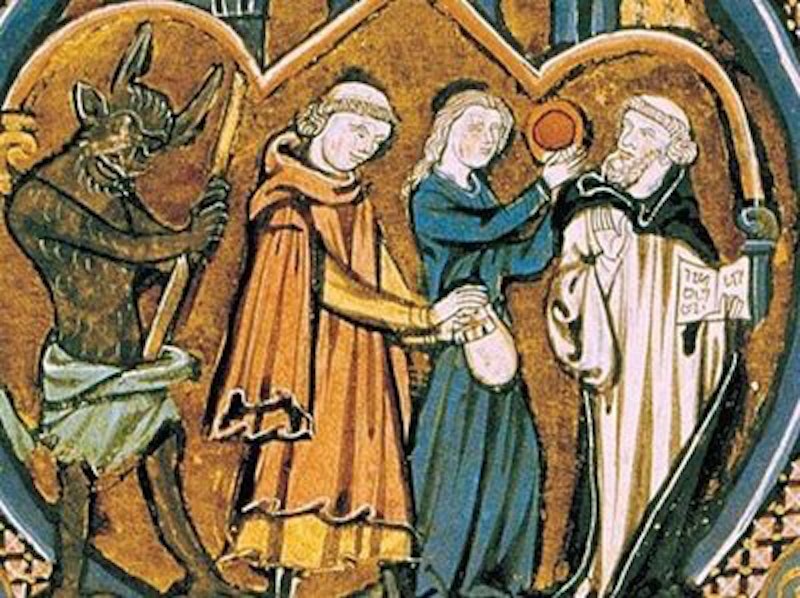 A word about this.

I believe in the worth of each of Our Lord’s creatures, and in the right to privacy which is one of the safeguards of that worth. I am opposed to the surveillance regime under which all of us American subjects (we are no longer “citizens”) suffer, especially those of us who dare criticize Washington’s submission to the warmongers and profiteers.

For these reasons, my critics say, I am a hypocrite in surveilling my daughter’s “private space.”

But I am certain that I am “doing the right thing” by writing in this way of Daughter’s lustful frottage. This is first of all because I am obliged to offer in this column an honest account of my daily preoccupations. Second of all, female sexuality is not a private matter. Because the sexual conduct of girls is so disruptive an element to any society, that society’s male elders must manage it—and restrict and punish it if need be. A young girl’s sexuality can lead men away from their collective, their church, and their God, with terrible results.

One sees this is in our culture itself. After 50 years of the Sexual Revolution, girls as young as nine or 12 are free in the West to engage with each other in the sin of oral sodomy and to copulate with as many as two or three older male partners at a time. The consequences of this nihilism are all around us, in our broken and neo-pagan society.

I repeat: The sexual mores of young women especially are of great public relevance. If we want the public realm to function according to “the principle of good order,” we must confront the sexual behavior of girls. Therefore we must talk frankly about it.

This is especially true for those of us who have chosen the so-called Benedict Option and are attempting—if imperfectly—to live in our communities in line with the doctrine of the Russian Orthodox Church, Moscow Patriarchate.

Nothing better represents the state of today’s Western Europe—hostage to sodomites, “hip,” infected with the “pop” anti-values of America—than the Eurovision Song Contest.

And this year Eurovision outdid itself in swinishness when it was won for Ukraine by a female singer named Jamala—a Ukrainian citizen of Crimean Tatar descent. This prostitute—let us not mince words—won the contest with a song called “1944.” That year, of course, was the one in which Stalin deported the Tatar population from Crimea to Central Asia for collaborating with the Nazi invaders against the Great Russian people. Jamala’s song is apparently a cri de coeur against this “crime,” if that’s what it was. (Personally, I suspect Stalin had his reasons. Even now, Great Russian vulnerability to fascists, whether they be Baltic, Georgian, or indeed Ukrainian or Tatar, is the great human rights story of our era—and one that will the Western media will never tell.)

I should stress that I do not accept the opinion, common on Russian Orthodox message boards and among my “paleocon” brethren, that Eurovision was rigged this year to undermine Russia’s deserved hegemony over the Crimean peninsula. I find this opinion paranoid. The Kremlin has better things to do than rig pop song contests.

But I understand the paranoia. After all, in 2004, the Ukrainian streetwalker/singer Ruslana won Eurovision. Then, within a year, Ukraine’s Orange Revolution—the first of the two Nazi anti-Russian revolutions that the CIA and the Mossad have staged in Ukraine in the last decade—had overthrown legitimate Ukrainian President Yanukovych, Putin’s stalwart if charmless protégé, for the first time (they would of course overthrow him for good in 2014). Ruslana, meanwhile, leveraged her fame to become a leading Nazi and anti-Russian politician in her “country”—a puppet/whore of NATO and the West. So Eurovision and Ukrainian anti-Russian Nazism are intertwined. And yet, sometimes a cigar is only a cigar.

That said, those of us paleoconservatives and Russian Orthodox converts who see Putin’s Russia as a last bastion of traditional Christian and anti-imperialist values have much to fear. The Tatar thugs and the Kiev fascists have scored a propaganda coup with the slut Jamala’s victory.

It was my understanding that Tatar resistance to the Crimean “homecoming” to Russia had by now been eliminated. I also understood that Western European opinion had become reconciled to Crimea’s “holy return” to Russia. Now, though, we must expect the bloodthirsty Tatar resistance to the Russian “invasion” to burgeon once again; and the dogs in Kiev could well open their frothing muzzles again to bark out even louder their demands that the Russian “occupiers” leave Crimea.

In Western Europe, meanwhile, the bogus “rights” of the Tatars and of Ukraine could once again become causes celebres when the slattern Jamala parades her filthy opinions (and filthier body) across the media.

My co-religionists and my political “fellow travelers” must gird their spirits for disheartening developments. A time of testing awaits both us and Mother Russia. We must pray for God to smite the Deceiver; but until he does so, we must endure. We must look forward to that dawn in which all of God’s children are unified in the Father, the Logos, and we must find succor for now in the love of Holy Mary, Theoktotos, Mother of God.