Optimism must be maintained. 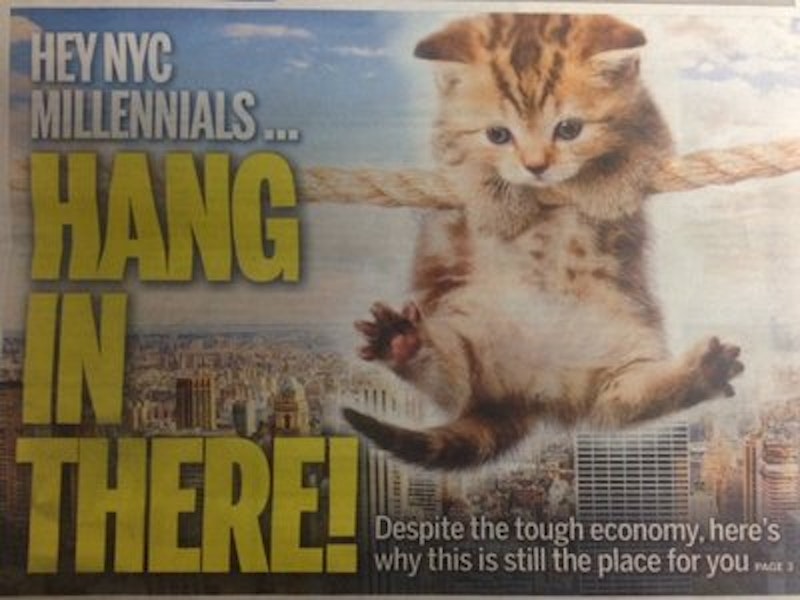 Last week in Brooklyn rain clouds gave way to a sun shower. When it rains there’s typically a mass of clouds over the city that, not unlike pedestrians on the streets below, reluctantly give way. When the sun started to shine through the clouds I found the city slightly more tolerable. It was like a car that had gone through the car wash and was now in mint condition. Typically I’ve felt excitement in these moments. However my level of gratitude was at that moment obscured by a grayer observation. The city has its moments but expecting any prolonged moment of nicety is as foolhardy as betting on the weather.

This is my second time living in the city. My first go-around lasted about a year. I was working freelance as a photographer and writer at that time. Gigs weren't happening frequently enough and money started to run out. Faced with the facts, I applied to dozens of full-time jobs. I was told that I was over- or under-qualified for most of these positions. Time ran out and job interviews did not come. I left.

My second stint in Baltimore lasted about a year and a half. I had some invaluable conversations within that time that allowed me to frame what expectations of lifestyle and income were most in step with who I was and more importantly who I saw myself settling into. These conversations made me re-consider going back to the city. Failing this time around would be okay because there were no strings attached other than the possibility of bringing upon myself the legal process of eviction that always seems so oddly charming in film.

Nearly two years since coming back to New York, I'm still living in Brooklyn and it’s much better than I’d have expected. No eviction yet. I live two blocks away from a major park where people look like professional models. Their dogs look like models. There are plenty of bars. Young folks sit in coffee shops at one p.m.

I have a daytime job working for the homeless shelter system. It’s tough work. Unlike jobs I’ve held before, I’m valued by my employer. On nice days I sit in a park by the water in Williamsburg and watch the sun go down, and then I’m left to stare at condos going up by the water and wonder how long I’ll be able to keep coming here.

For anyone who lives in the city and isn’t rich, the idea of impermanence pops into the mind frequently. It remains difficult to make in-roads to a creative field you’d much rather earn your living by when you know that your income is becoming less meaningful compared to a rising cost of living. For real estate in Brooklyn it’s all a matter of how soon rather than if. I suspect there are those who live in my area for which the ability to pay high rent signifies a victory lap. Paying a lot for a place to live and not ever owning it has never struck me as a reasonable proposition. Oddly, I read a lot of articles in the op-ed sections of New York-centric newspapers and online publications that say that this phenomenon of unaffordability is indeed tragic but that optimism must be maintained. I’m guessing these writers have never left New York City for any appreciable amount of time.

I had the pleasure a few years ago of touring with fellow Splice Today writer Nicky Smith. We started the tour in New York City, which is a miserable place to drive in and out of. The moment we reached New Jersey we breathed a collective sigh. The consecutive drives into any city that was not New York were a delight, on any coast, even in the middle of supposedly no-where America. Don't get me wrong, a lot of these shows on our tour paid us no money and we often slept on shoddy couches in freezing homes. The road is hard but it opened my eyes because I couldn’t help but sense that within it lay my future.

My intimations of the future are few. I’m not clairvoyant. Yet when I drove into Seattle I felt at ease. To see the mountains is to experience a manifest destiny moment. The ordinary act of drinking strong coffee while running an errand seared itself into my hippocampus. At the same time I felt that I’d seen this place before.

As it turns out, I had seen Mt. Olympia in a library book of the U.S. National Park system. I must’ve been about eight years old. That book proved to be the inception of an idea, which enabled me to perceive driving into the Pacific Northwest as an unexpected homecoming. I was instinctually more on-the-ball at eight than I am now.

There are practical matters in practical dreaming. I simply knew that the Seattle friend who I visited lived in a big place in downtown and was renting it for a good price. Compared to New York prices this was a bargain. Opposite to feeling any envy about her situation versus mine I felt nothing but good will. The vibe of the city immediately rubbed off on me. Within a week I’d checked off two major things on my list of key features that I needed in a city; the place had a good cost of living to salary ratio and it had a great atmosphere.

The majority of people I know who live in Brooklyn who are college-educated and employed would be on the streets within three months if they lost their jobs. There’s a tension even among families in the city that most newcomers or tourists remark upon as the New York attitude. What they don’t know is that this attitude is a concern that has morphed into fear. The aforementioned articles in New York newspapers and blogs say that Millennials who are struggling with the nexus of rent/debt/job-mobility hang in there; that if they linger just long enough change will likely happen for the better. I disagree. New York City is not the only place in North America where interesting people live. Nor does it have a monopoly on culture or career opportunities.