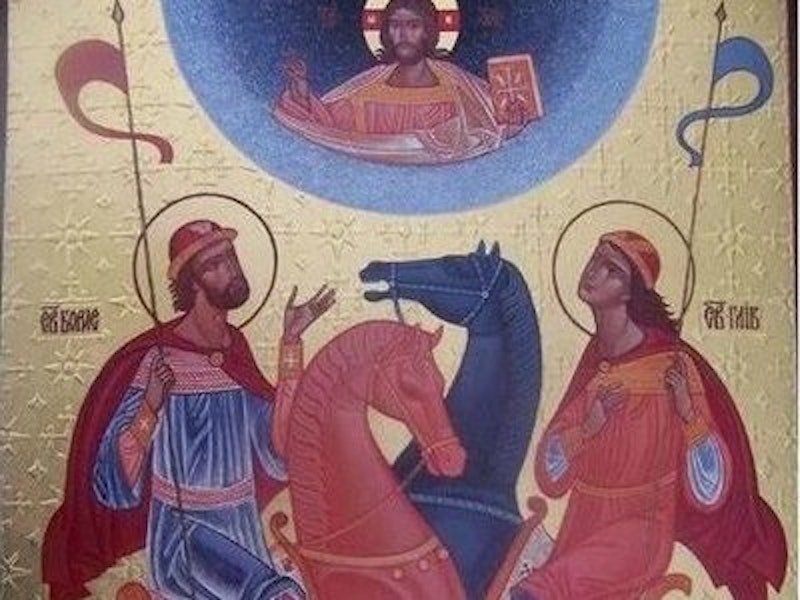 Well, well. So it turns out that Daughter has been inappropriately touched by Dmitry Vladimirovich, the elderly Russian immigrant—and former seminarian—to whom I’ve been sending her for instruction in Russian Orthodox sexual ethics. (I’ve complained in this space before about Daughter’s addiction to the digital stimulation of her clitoris and labia minora.) Dmitry Vladimirovich, that admirable nonagenarian, has caressed her upper thighs and fondled, longingly, her firm young breasts.

So Daughter says, at any rate. I don’t believe a word of it. There are, naturally, no witnesses to these alleged infractions. Lyuba, the old man’s buxom blonde younger relative, who assists at these meetings, compensating for the gentleman’s relative lack of English and Daughter’s complete lack of Russian (a lack that bothers me and that I’ll soon remedy, I think), happened to be out of the room during each of these incidents.

“So Lyuba had gone out to the kitchen to make tea,” I said to Daughter when, teary-eyed, she broached this topic with me. “How convenient for you and your disgusting accusations.” Daughter looked stricken. “What, do you think he would have molested me if she’d been there? Of course she was out of the room.”

“Yes, yes,” I said. I was in the process of polishing the buckles on my newish sandals. “And just which hand did Dmitry Vladimirovich fondle you with? His right hand? The one with the shakes? That he can barely hold his teacup with? Or his left hand? The one that’s paralyzed from his stroke? The one that’s frozen into a claw?”

“Jesus Christ, Father,” Daughter whined (I let her pass her use of THE SON’s name in vain). “Jesus, you really don’t believe me. You really are calling me a liar.”

“Foo, foo. You’ll go back to Dmitry Vladimirovich this weekend and you’ll like it,” I countered. “Anyway, let’s say he did fondle every inch of you. It’s hardly as bad as the way you profane your own body with your filthy middle digit each night—two, three, and sometimes even four times per night, as far as I can tell.”

Then I laughed at the absurdity of her miserable position. You can imagine her response to that. But they were mere words, words, words, to quote the Immortal Bard. I paid them no mind, but donned my sandals with their newly polished buttons and, leaving Daughter there to pray, went to prostrate myself before my iconostasis and petition Holy Mother Mary (O most venerated THEOKTOTOS) for succor of the soul.

I hasten to proclaim the good news! Our tiny Russian Orthodox congregation—it consists so far of me, Mother, Daughter, Brother Aiden, Sister Marie, and Ivan and Svetlana, a married immigrant couple from Donetsk—will, if all goes well, soon be in possession of a parcel of land on which to build the first Russian Orthodox Church (Moscow patriarchate) in our corner of Indiana.

Rejoice! Give thanks to the bounty of Our Father (O most exalted LOGOS) for this blessing! Let us pray to Saint Gleb the Filthy Bigot, patron saint of new Russian churches in good rural places! I have written little of our quest for a suitable plot on which to build our church. This is probably because the process was so frustrating.

Like Saint Ephraimos the Stinking Wretch in his gloriously violent campaign to drive the Lutheran Balts from the Novosibirsk region that they were defiling with their presence, we faced numerous obstacles. A realtor of Lithuanian descent was one. I sensed from the beginning that anti-Russian racism was this swine’s creed, and that we could expect no decency from him, and certainly no access to choice parcels of land.

A smirking functionary at Wells Fargo was another obstacle. I gather that he was of Levantine provenance. At any rate, there wafted around him a scent of slivovitz and unleavened bread. Worst of all was the registrar in the department of deeds at our town hall. His surname ended in -ENKO, making it a surname that I am bound to hate; a surname that is, in itself, almost akin to an anti-Russian hate crime.

Yet our trials are done, and now begins the joyous work of building. Soon, God willing, we will be graced with a small Orthodox mission church just as blessed as that in which Rod Dreher prays in Louisiana. It will be a worthy place in which to lacerate our flesh and pray for the annihilation of the enemies of the successor state to the Soviet Empire, to the Romanov dynasty, to doughty Muscovy of the House of Rurik!