I Shit in Your Bed

Rooster takes unsubstantiated revenge to the next level in the tropics. 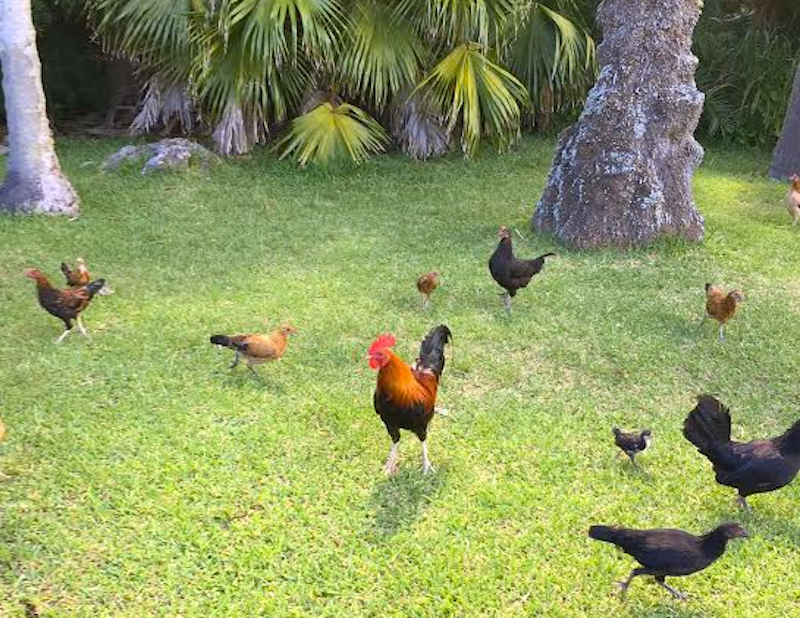 My instrument was spread out and broken in pieces, victim of garrulous sabotage, a hit job of unnecessary violence and repulsion. The lute was covered in chickenshit—wood and steel wiped and walloped in dollops of white, shattered on the floor of my hotel room. My tropical location no longer under wraps, so my meeting tonight was compromised and possibly leaked. I unzipped my birdbag and looked up my name on Twitter, Facebook, and Google. Shouldn’t have done that. Really puts me in a bad mood when hundreds of people send me images of fried chicken buckets and victims of the avian holocaust, skinned, mangled and bleached of all their dignity. Whatever the reason for this particular attack on my third favorite possession and my fifth favorite instrument to play, it came from a very specific place: hate. It was hate for my kind and a fear of someone like me who disrupts the natural order and threatens the stability of supremacy. I lit a cigarette inside the room, left an Old Hickory (soon to be Tubman) for the maid, and dipped out quick, taking only the essentials with me on my flight by night.

The hotel was curiously empty for eight p.m. on a Saturday night—no one at the bar, no one by the beach, only the overwhelming beauty and sadness of the tree frogs singing in the dark, mating calls, looking for life. I stole a golf cart outside of the lobby and rode on, navigating narrow turns and approaching headlights that never seemed to arrive, their growth frozen in place as I passed by. I had several suspects in mind responsible for what had happened in my room, and I was on my way to take out the first of them. I had no evidence holding him aloft above the rest, beyond my intuition. Earlier in the day, I ran into my friend Nicky Smith while walking the crowds and organizing a pickup pecking session with some of the local roosters. We talked for less than a minute, as his brother and girlfriend were beckoning from a golf cart halfway down the road. He’d jumped out from the back and onto the road—such is the strength of our friendship. We arranged to meet at the hotel bar later, and I realized I was blowing him off as I sped down the road toward where his own brother was staying, a private house in the hills overlooking the bay.

Nicky’s bad-seed relation had made several threats to me and my family, some veiled and other explicit, online and a few times in person. He was sleeping with the lights on, a book over his chest and his glasses still on. I slid in through the open sliding glass door and assessed the situation. With the grace of every feather on my body, I bounded up from the bookcase onto the headboard and dropped down onto his forehead, digging my claws into his skin as he awoke in horror. His eyes wide open, and his body frozen in fear, I stared at him and awaited something, a trace, anything to clue me in on his level of complicity in this attack against me. After 10 seconds, nothing came, so I started pecking wildly at his face and his eyes as he tried in vain to protect himself. Once I made a cherry mess of his left eye, I moved onto his arms and legs, doing my best to break them with my spur claws. He didn’t scream or move much at all, paralyzed of something other than me, other possessors, watchers, oppressors of the night. I spit and shit on him before leaving him to wallow in it, and sent in the local roosters to finish him off. He probably thought we were brothers. Ignorant cunt. I lit a cigarette, and waded in the pool for a bit, helping myself to the stars and the beautiful melancholy of my friends in the trees singing their song.