The gist is if you're dead, you'll never have to worry again about the troubles of living or those still trying at it. 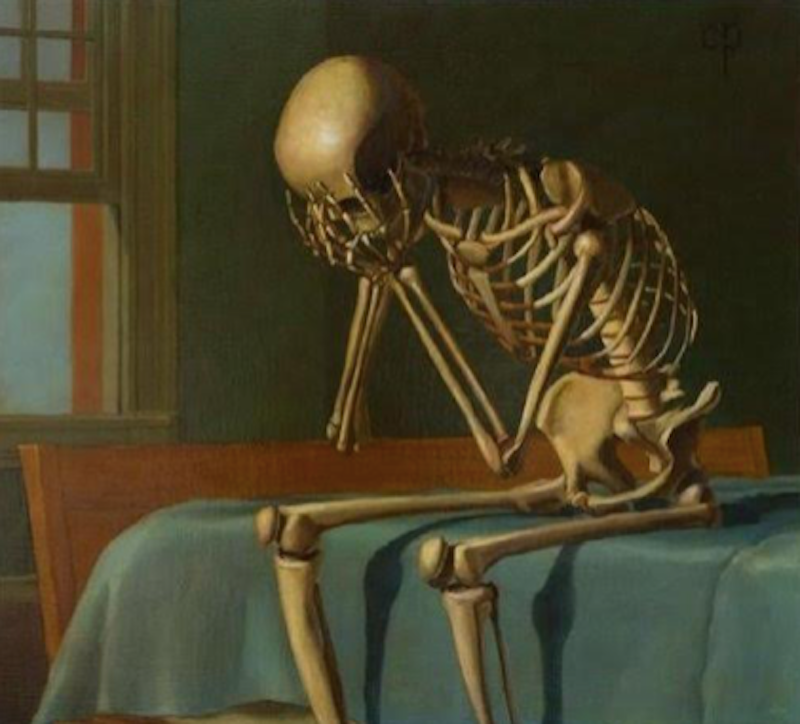 Artificial intelligence appears infinitely smarter than traditional encyclopedic knowledge. Reality is subjective only to the viewer of its existence. Absurd notions unfold, become the usual routine, screaming to wake the dead, bringing them back to life, or snatching it all away. I can’t pinpoint exact dates of cataclysmic events or the year when everything shifted and common sense unraveled, leaving nothing but dust and disbelief. It was possibly a gradual imbalance in the magnetic poles. The invention of holograms to imitate real life or just a bad movie. The glitch in the grid where everything appears as a simulation of artificial reality. Lucid dreams or sleep paralysis have nothing on me. I am delving headfirst into the sleepy muck of slumber, and I’m insanely reanimating all the highlights of past lives like a reluctant sleepwalker.

A memory machine conveys fractal images of past regressions, worldly imagery moving back to some innocent embryonic beginning, an electric power spark into the light of spinning illusions, searching for the sandman on celluloid vignette projections that burst into flame. The brittle vintage cartoons of childhood play out in my comical cosmic release. A zoetrope is casting shadows imitating life, laughing at ourselves and each other, self-deprecating belly laughs, a knee-slapping group grope of guffaws, one big happy family of organic slop. The games play out with no rules or instruction manuals. It may send you running for your life or dancing to a lively melody of dreamy euphoria.

My old buddy and bandmate Bill Moriarty recently wrote a humorous observational poem on the advantages of death. The original appears at the end of this cautionary tale. The gist is if you're dead, you'll never have to worry again about the troubles of living or those still trying at it. We're joined together, Siamese twins in the psychic stew. There are no more bills to pay that most can't afford anyway, no more pain, illness, or unnecessary suffering. There would be no need in the waking world to put on airs or work a lifetime of shit jobs for minuscule pay to impress some heartless taskmaster. I've had that privilege too many times to recount. We're always playing the lottery of living on the edge. No love lost, no harm or foul. Life is merely the act of showing up. Death is the finality that most folks would rather skip. Take a spiritual rain check.

I agree with Bill Moriarty's sentiments. To go a step further, I'd add my assumption that we could already be dead, a figment of the collective imagination. Our experiences are an objective collection of shared memories rippling through the centuries. A pebble tossed in the lake, creating waves across oceans of time to the universal remembrance of birth and death reborn. The ravages of time steal away the days like a thief. We’re chasing future ghosts to catch up with some distant murky past. Yours or mine is of no consequence, losing ground with every step forward. It's still a sick joke we always tell ourselves and each other in a backward jump and flip. Life's funny that way, plodding onward into the black hole of a dreamy existence. Living on the edge of dark matter or stepping in the middle of light isn’t much different from choosing.

This old planet has good bones. Millions upon billions of calcified remains layer the earth's strata we tread lightly on, built upon millennia's ruins. All dreams come true in this great dying. The map to where we were all these lifetimes ago. And likely where we're going. Up stairways to the future, and down the elevator shaft to the present. Faithful souls on clouds strumming golden harps of lost wanderlust. We’re floating around ethereal unnatural worlds, searching apparitions, phantom hallucinations of ideas to sleeping giants dreaming. It's spooky out there. We live out our lives in a stasis of breathing in and out. Every breath might be the last. The sun and moon are there, but nobody knows why they’re astronomical energy forces beyond our control. We fail magnificently losing ground moving ever forward to the next day, after today, known as all our tomorrows.

Bill Moriarty: “The Advantages of Being Dead”: “You'll no longer need to pay rent, do the dishes, or wake up early to go to a job you detest. You can take off as much time as you like as it won't exist, and that dollar you chase to keep yourself alive, well, you'll be dead. You can finally relax, take it easy, as even dreaming will disappear, just like who you were."