Are You the Father?

Before he reads a paternity result, Maury Povich asks a man what he’ll do if the child isn’t his. 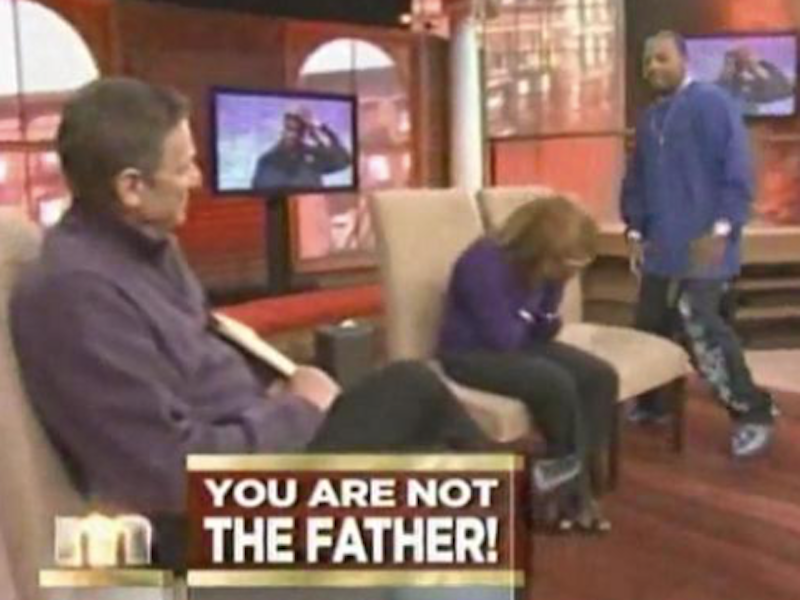 During a 2017 episode of Sway’s Universe on the Shade 45 network, Maury Povich cited a statistic that he believes came from The New York Times: “Ten percent of the children in this country are with the wrong father.”

If Povich was attempting to cite the New York Times article from 2009, in which it was stated that 30 percent of the 400,000 paternity tests performed that year disqualified the assumed father from paternity, he may have been off by a few percentage points. Granted, the statistics only take into consideration instances where there’s reason to doubt the paternity of a child, and are not intended to suggest that paternal doubt should be cast on 30 percent of all pregnancies. Still, this is a very high number, and if the audience members of these shows wanted to take things one step further and base their projections of paternity confirmations on Povich’s show, they would probably guess that a full half of would-be fathers “... are NOT the father!”... as Povich has become famous for punctuating the delivery of the bad news.

In the same Sway’s Universe interview, Povich was asked about how he’d advise a gentleman who comes on The Maury Show and finds out that a child is not his.

“There are a lot of young men who come on the show who find that out,” Povich told Sway and his co-hosts. “They’re devastated, because they have bonded with this child. If you have that feeling between child and parent, and now, all of a sudden, it’s disrupted, they have a hard time. I don’t know if they take it out on the woman or not; I hope they don’t. We like to think it’s an honest mistake.”

Nowhere in this response did anything emerge that constituted legitimate advice to the devastated non-father, aside from Povich’s hope that no vengeance would be wreaked upon the child’s dishonest (or conveniently forgetful) mother. However, on nearly every one of his shows, before he reads a paternity result, Povich asks the man what he’ll do if the child isn’t his. Everyone knows what response comes next.

Cue the applause from the studio audience.

Almost without fail, some variation of this will emerge from the mouth of any potential father of a child on The Maury Show, Paternity Court, or any other television show dedicated to revealing the results of child paternity tests. To date, I’ve never heard a man reply to this question with the appropriate response: “For the sake of the child, the mother, and myself, I need to permanently and immediately extract myself from the child’s life.”

This is undeniably the right answer, but it would never be followed by applause from a live studio audience… at least not unless the man delivering the line was given a few more moments to explain his reasoning.

The question of whether or not women with children will begin dating again once their consecrated romantic relationships are dissolved is more a matter of asking “when” than “if.” Of the 1700 recently divorced women surveyed by Worthy, Inc. in 2019, 78 percent were already thinking about dating again before their divorce papers were even signed, 65 percent were actively dating within the first year of getting divorced, and 80 percent of all the respondents had children.

In the real world, what possible benefit would there be to a non-father remaining in the child’s life, especially if he was never married to the child’s mother? From the perspective of the mother, having a man she used to have sex with hanging around her child all of the time is certainly a deterrent to whatever potential love interests she might encounter in both the short and long term. Imagine a scenario in which a woman is forced to explain to her date that the man coming over to babysit her child is a) not the father of her child, but b) is someone she used to have sex with, who x) once believed himself to be the child’s father.

If a woman’s date has any romantic intentions toward her, this would spark suspicions, and justifiably so. According to a poll conducted by Research Now, nearly 30 percent of divorcées have had sex with their former spouse following a separation or a divorce, and according to a poll conducted by the Adam & Eve sex store, 44 percent of respondents had sex with an ex-boyfriend or ex-girlfriend on at least one occasion. While these results are derived from relatively informal polls with dubious sample sizes and respondent pools, they do suggest that an average, honest suitor should be suspicious if a woman’s former sexual partners are lingering in the background… and so close to her children.

From the man’s perspective, the view is similar. As new female love interests emerge in his life, how would they logically react to a boyfriend that allocates time and resources to the care of a child that isn’t his, that was born from a woman that he admittedly used to sleep with?

Then there’s the net effect upon the life of the child. Psychologists frequently say that many children are naturally inclined to view the love interests of their unwed parents with jealousy and suspicion, and often resent the dating activities of their parents because they symbolically put to rest any potential for reconciliation between the child’s natural parents. Imagine how this confusion may be magnified in situations that involve the convergence of a father who isn’t married to the mother, a close friend of the mother who was once believed to be the child’s father, and a new love interest hoping to win the heart of the mother, and who ostensibly hopes to become a permanent member of the child’s family.

According to one recent study, the stability and functionality of a family after a divorce is a predictive factor in children’s adjustment. A key component to ensuring that children are able to capably adjust to change is whether or not established family roles are able to be maintained. A child-rearing arrangement that’s partially dependent on maintaining the presence of a non-parent, former sex partner of the mother in a child’s life isn’t something that most family relationships are built to sustain.

So, if you ever find yourself in the unenviable position where Maury Povich or Judge Lauren Lake are about to read the results of your paternity test, and they ask if you’ll stay in the child’s life even if you’re not the father, please say, “No.” You’re going to be booed, derided and ridiculed, but at least your answer will be correct.