Only You Can Prevent Forest Fires? 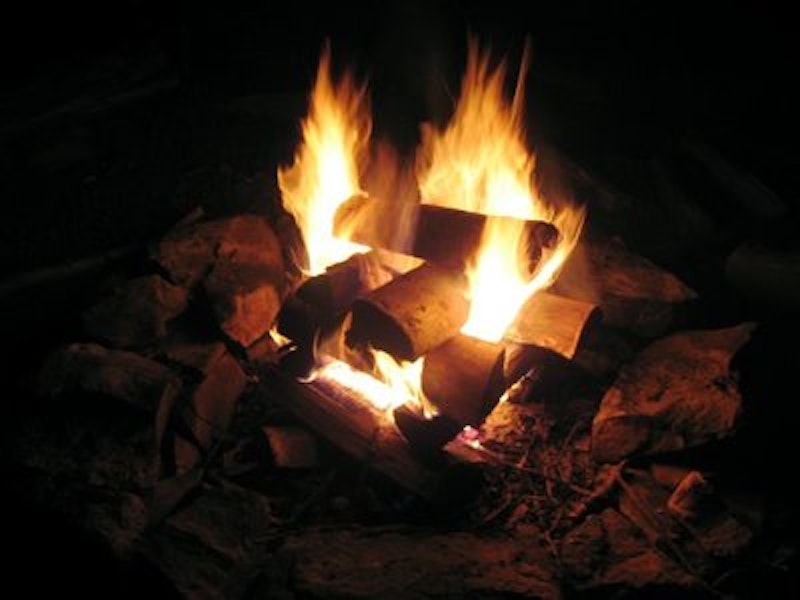 “Michelle, tell them how serious it is! See if they have water!"

Down on the road, Michelle flagged a passing minivan. “Excuse me, where’s the nearest bathroom?” she asked, cradling two empty water bottles.

Michelle couldn’t hear what Jared shouted from the smoking hilltop that was campsite 76. As the van took off, Michelle sprinted down the forested valley, contending with piled leaves, mud and water, fallen trees, rocks and questionable bushes. She had no time for caution. The urgent feat rendered her breathless. To reach the bathhouse, she faced a steep hike out of the valley.

Jared lost sight of her and turned to acknowledge the leaping flames. Dry leaves and sawdust crackled as the oblong field of fire spread toward the tent. Weeds and brush, swept by the smoke, quickly melted into ashes that peeled away on the wind. Michelle’s teddy bear was on its back near the tent. With no reasoning other than to keep the bear clean and out of the path of crisping leaves, Jared unzipped the flap and tossed the teddy in with the other stuffed animals and sleeping bags. He thought that, if need be, he could rip up the tent like a sack and drag everything off the hill to safety in one mad rush.

He didn’t have his phone. It was across the road in the parked Scion. He stood barefoot because his shoes had fallen apart. How idiotic and irresponsible would it have been to wait around, doing nothing as the fire grew?

Jared scanned the damage for a place to start. He saw the sawed-off stump he’d positioned by the firepit, intending that they’d sit on it for a night of roasting marshmallows. Before she dashed off for water, Michelle had commanded, “Find anything big and use it to stamp out large sections.” He lifted the stump and dropped it on a patch of blazing black ground. A wide corner of the flames extinguished with a poof.

Jared next grabbed the wedge of chopped trunk that looked like a quarter of a watermelon. Before the brush fire, he’d stacked the wooden melon on a hewn pedestal as an ornament to their site. Now it had a much different purpose. Unfortunately, when Jared plunked it down, it landed diagonally against the smoldering trunk that lay behind the pit. In seconds, the wedge was engulfed and there was no repositioning it. The smoke it sent up choked Jared and irritated his eyes.

Viral flames advanced toward the tent, picnic table and brush behind the log. Bushes burned and smoke clouds thinned to webs as they rose and spread across the sunlight through the trees. Jared worried that the thin trees would soon go up. “We’ve got to call the fire department!” he cried aloud to himself. He panicked in the sizzling forest and then found a thick branch like a club.

Jared was a Neanderthal, pounding the ground and beating the heads of flames. A few times the method seemed to work. However, nature explained he was an idiot. The wind from wagging the club stoked the fire that exploded with a whoosh. “Come on, Michelle! We need the water!”

He reasoned that green leaves would be slow to burn. He rushed to a nearby tree and snapped off a bushy branch. He walked along the scorched perimeter and leaned in to sweep rapidly, back and forth. Again it worked in small doses. But for every bit of progress there was resistance. His sweeping device fanned hellfire. It dried out and went up like a torch. It was then, not looking, Jared burned his foot in the black leaves that clung to his sole. He brushed his foot clean, shouting in pain: that same feeling as when you’re on the beach and you accidentally step on the embers some asshole buried under sand. His foot felt cracked and seared. It would blister.

Out of breath, Michelle ascended the hill. “Grab a bottle from me and carefully drench the areas that need it most.” Jared hurried to assist her. “I burned my foot.” The bottles ran out in no time. Under Michelle’s direction, they had extinguished a dent in the path of rage. Though this was relieving to see, there wasn’t time. “Go get more!” Michelle pushed the empty bottles against Jared’s chest. “I can’t run up that hill again. I’ll work to tamp it.”

“Call 911! Let the ranger know!” Ignoring his injured foot, Jared bolted down the hillside. Deathly allergic to poison ivy, he felt noble and willing to abandon all care to the retrieval of water to save the woods. He clambered out of the valley, hopping rocks and scaling a fallen tree to the bathhouse. The stupid bottles were too large to fit under the sink’s faucet. He had better luck turning a shower on full blast and cupping the showerhead. He dashed back through the valley. Pebbles, sticks and thorns gored his feet, but he made it to Michelle in minutes with the ration. She put it to good use. Steam and smoke trailed from the moistened earth. It was a more controlled fire now, with only two or three orange bursts under small trees in the brush or creeping out from the log.

Time to do it again. Jared hobbled his way back down. His feet worked as well as flat tires. He refilled at the shower and took a different way along the road that wound up getting him lost. He walked along the winding road, searching for the hill. “Michelle! Michelle, are you okay? Is everything okay?” He first saw the Scion and knew he was close. “Michelle?”

“We’re here! The fire department is on the way.” The young park ranger, who recommended and registered the site to them, was up there with her. With hands on his hips and frowning slightly, he inspected all angles of the wreckage, as Michelle finished tamping. All visible fires were out.

“You need this water?”

“Sure. Every bit helps.”

“This site should’ve been blown for leaves and cleared. You’re right. Sorry about that,” the ranger apologized. “But other than the fire, what did you think of this site? Pretty beautiful, isn’t it?”

“Yeah, we were enjoying it.”

“She had just started the fire for dinner when a wind picked up and dragged the fire out from the base of the pit.” Putnam County fire trucks and additional ranger pickups stopped on the road below. Buff and pudgy men and a woman came up the slope in galoshes and suspenders and diagnosed the condition.

“Just one hose!” They marched back down the hill, moved vehicles, and then came up through the bushes with their long black snake and flooded the area. The ranger pulled aside to confer with an older colleague. “Leaves and sawdust. Should’ve been cleared.”

“It’s a new site. Have them come up to my office, we’ll move the folks to another site. Shut these ones down.” Coming back from running stuff to the car, Jared thanked the jolly gnome firefighters as they confidently marched downhill, mission accomplished. “Not a problem.” Michelle broke down the tent and Jared cleared the picnic table.

Trailing behind fire trucks they were soon off to site 17, up front in the park. It was where they camped all the weeks when they hadn’t yet found a place to live in New York. What was crappy about 17 was that you could hear traffic. Additionally, the site’s table and fire pit was desecrated by people who burned beer cans and bottles and all their trash. They had hammered bottle caps into the table and trashed the ground. Michelle looked defeated. All they had wanted was to cook veggie dogs, roast marshmallows, sit by a good fire and listen to music on her portable speaker.

Jared got dirty digging out as much aluminum and glass from the pit as he could, while Michelle bagged the trash. He broke dead branches into kindling, and Michelle sculpted one of her expert three-log teepee fires. They made beer-barbecued onions and mushrooms, the hotdogs, and played around with their stuffed bears, toasting marshmallows from the ends of long sticks.

As sunlight extinguished behind burnished treetops a cop car rolled up to their site. A gray uniformed state park policeman in a hat walked up. “Hi folks. I’m here to follow up and do a standard incident report. Tell me how the fire happened again over at site 76.” Jared and Michelle took turns recounting aspects of the drama. The cop shook his head about the sawdust and leaves. Jared let the cop know about the aluminum and glass clutter in 17’s pit. Then the cop wanted his name and address for the report. Jared handed him his license.

“Yeah.” Conversation seemed ready to touch on the recent unrest, but the cop cut it short. He said goodnight and left them to their marshmallows. But there was no escaping a growing paranoia that they had been smelting aluminum, breathing and ingesting its toxins. Michelle doused the dirty fire and they went to read in the tent. Sleep that night was crappy. Traffic roared. The aluminum-scented smoke from the pit assaulted their noses and stifled the air in the tent. They heard occasional crackling. Neighboring sites were alive late with chatter and hip-hop. “You think our fire is out?” They lay side by side mildly alarmed but too incapacitated to check.