The Studio Boss and the Bow Tie 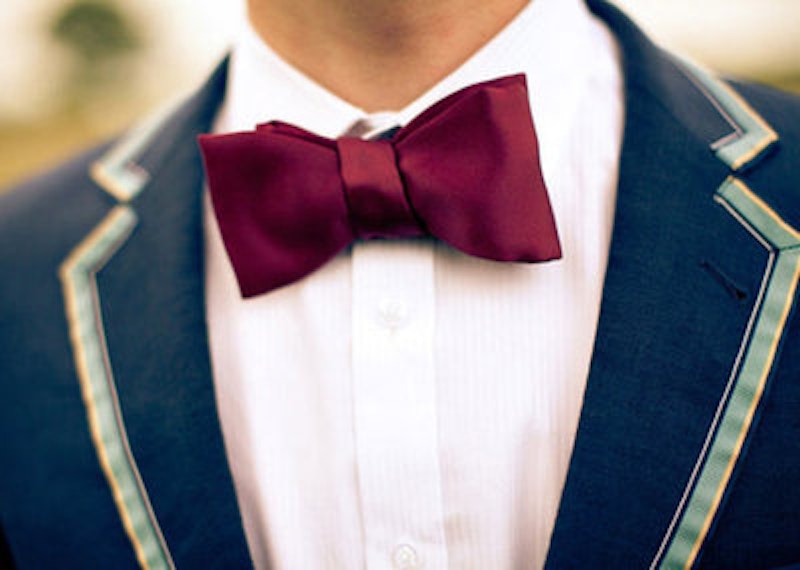 Harry Cohn ran Columbia Pictures. He built the place, he lugged it through its troubled infant years, and finally he lifted it to world-class status. Columbia began before the talkies, but Hollywood was already going full-steam. Columbia came late and it had to struggle. For a while it wasn't even Grade B, it was Grade Z. Hollywood laughed at the place if it was noticed at all. Cohn kept bulling along. By the mid-1930s the studio had turned the corner and Cohn could laugh back. He smoked cigars bigger than a Shetland's cock, and his suits were of fabric so lush it could swallow your thumb. When he presided over his producers, it was at a table broad and long enough for a turboprop to make an emergency landing. He wasn't happy, because he never was, but he was the boss.

He didn't get there by being reasonable, good-natured or couth. He was a foul man and so lacking in class that Hollywood's other bosses thought he lowered the community's tone. But once he had some Oscars on the shelf, he decided to do what the other studios did: buy some class. One day Columbia's publicity department sent out an announcement. The renowned playwright Henley Hesketh Wainwright, product of Yale and winner of the Pulitzer Prize, would come to Columbia and write screenplays. Soon enough the playwright did arrive at Columbia, and that very day he was fired. Here's how it happened.

The morning went all right. The playwright was shown his cell and typewriter, and he wrote two lines of dialogue for a blind boxer arguing with his trainer about why he had to fight in the ring to save his little sister. Then came lunch. The producer of the boxer movie escorted the playwright to the cafeteria, which had newly installed oak beams that supported nothing.

“Bow tie, huh?” the producer said as they sat down. He was taking note of the playwright's neckwear. The producer nodded to himself. “Not bad,” he said. Most people in Hollywood did not wear bow ties; that was something for fancy writers from the East.

The playwright ate his omelet and drank his Napa Valley wine, and the producer asked him about Yale. At one point a phalanx of men in dark, plush suits swept into the room. At their head was a bald man whose cigar projected a couple feet in front of him. He was Harry Cohn.

“Hey, Al,” Cohn said, noticing the producer. “Hey, you fucking monkey-faced Jew. Whaddaya, too good for the common folk?” Cohn and his men were heading for the executive dining room, and Cohn wanted to know why the producer wasn't coming along.

“Oh, Mr. Cohn, please don't worry,” the playwright said, overcome by democracy. “Half the time I can't remember the name myself.”

There was a silence, and then Cohn took the cigar out of his mouth and laughed. He laughed loudly. His men laughed too. The playwright beamed to himself. He felt that democracy was all right.

“And you got the bow tie,” Cohn said when he was done laughing. “All right, fellas, let's amscray.” He and his men continued on to the dining room.

After lunch the playwright was working on what the trainer could say to the boxer. A knock came at the door, and the producer leaned his head in. “Henley,” the producer said. “Good news. He wants you in.”

“In the meeting,” the producer said. “Come on.”

After traveling down several long, low-ceilinged hallways, they arrived at a vast door, and behind the door was a room with a very high ceiling. Beneath the ceiling was the table suited for a turboprop, and along this table various men in rich suits were finding their seats. The playwright sat with his producer.

Far down, past the end of the table and the hulking leather chair at its head, a small door opened. Everyone fell silent. Cohn had entered the room.

“Awright,” he said, and he climbed into the seat of black leather. “Come on,” he said. “We gotta crack this. This fucking piece of garbage is fucking my ass.” Apparently he didn't mean the chair but something else—a problem with a screenplay, because the producers began making suggestions of that sort.

“Make the colonel a Navajo,” one producer said.

“Maybe the justice of the peace can't type because of his fingers,” another producer said. “You know, from the war.”

“Can't type?” Cohn said. His bald head, down that long way, gleamed against the leather. “Okay,” he said. “Fingers, yeah.” Then he thought some more. “Nah,” he said.

“Now, if the librarian had a little brother and he was a cripple...” a producer began hopefully.

“The train engineer could—” a producer said.

“The fucking sticks, they love cripples,” Cohn said. “But fuck them. Ixnay on the cripples.”

The playwright felt he should be making a better account of himself. But he didn't know what the screenplay was about or who the characters were.

“The detective doesn't have pants,” a producer said, straightening up. He was a man with a bright idea. “We got him with his garters and his underwear. You know, tasteful, but—”

“Underwear?” Cohn said. “Oh, shut up. Shut the fuck up. You ain't even dizzy. Garters.” Then he added, “Fucking underwear.”

“Aw, wadda I care?” he said. He took the cigar out of his mouth. “A week from now, I'm on a boat headed for London, England. Yeah,” he said, “and I'm gonna paint the town red. I'm gonna hit all the high-class joints.” His manner had become more animated. “Hey,” he said. “Listen. I'm gonna be shelling out the dough like those jerks never heard of.”

The playwright saw his chance. He leaned forward and aimed his voice down the long table. “Mr. Cohn,” he said. “Mr. Cohn.”

“Mr. Cohn,” the playwright said. “Rest assured I shall be happy to accompany you on this London expedition.”

Cohn was puzzled. He put the cigar back in his mouth. “Yeah?” he said. “Whadda I want with a joker like you?”

“Well,” the playwright said, flushed with the warmth of one who makes a good joke, “I expect you shall need an interpreter.”

Cohn considered this. “You,” he said quietly. “You and your fucking bow tie get the fuck out of here.”

And that's how the Pulitzer prize–winning playwright from Yale was fired on his first day.