Only a Norwood Song

A romp around Queens. 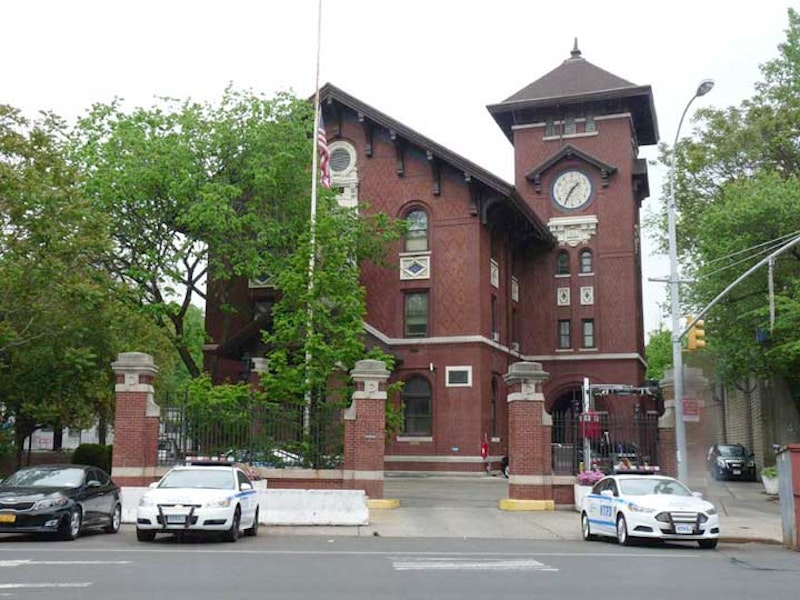 Norwood was originally part of the Varian family’s dairy farm. The Varians, who produced a New York City mayor, owned the oldest house in the area, which is still standing. The name either comes from “North Woods” or from Carlisle Norwood, a friend of Leonard Jerome, the grandfather of Winston Churchill who owned the nearby Jerome Park Race Track in the 1860s. The neighborhood was laid out in 1889 by entrepreneur Josiah Briggs.

For two decades in the late-20th century, Norwood and its immediate neighbor to the south, Bedford Park, were Irish enclaves, after immigrants from Northern Island during the era of The Troubles fled and settled in Woodlawn Heights to the north, and Queens’ Woodside. Norwood became known as “Little Belfast” and was a hotbed for supporters of the Irish Republican Army. Eventually the Irish influence in the area lessened, as many Irish returned home to participate in the homeland’s roaring economy in the 1990s and early-2000s. 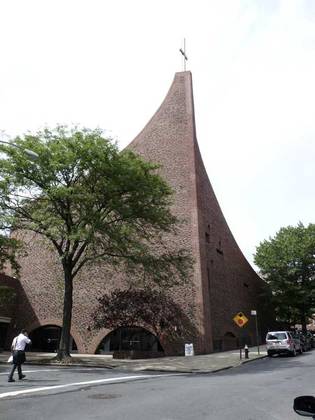 This wildly imaginative Catholic church St. Brendan’s, is on Perry Ave. between E. 206th and E. 207th. The parish was organized in 1908 and gained this church building, built in the form of a ship, in 1967.

According to legend, St. Brendan, who lived in the sixth century, was a sailor and navigator and journeyed to what he called ”the island of the blessed” or St. Brendan’s Island, considered by some to be the Faeroe Islands, Iceland, or even further west to Newfoundland, making him the first European to visit North America, centuries before the Norse made it. 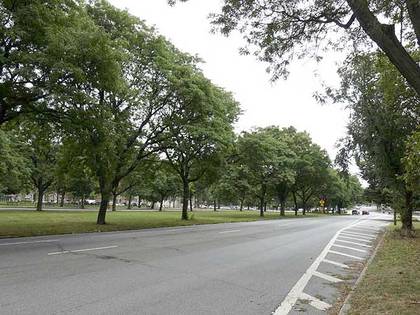 When I first became aware of Mosholu Parkway in the 1970s, I saw its name on a map and assumed it must be a Japanese name and Mr. Mosholu was a prominent Japanese American-Bronxite who’d been honored by a street name. The reality is no less colorful; it’s among the many Native American place names that have been woven into the city’s fabric. Mo-sho-lu, or “smooth stones” was the Algonquin name of a rural brook running through the heart of what became the Bronx’ Spuyten Duyvil and Riverdale neighborhoods.

In Norwood, Mosholu Parkway was laid out as a true parkway, a relatively narrow carriage road lined with trees and foliage, along another former waterway, known to the Dutch as Schuil (anglicized as School) Brook. Mosholu Parkway originally ran only between Bronx and Van Cortlandt Parks, with through traffic running in the center and local and commercial traffic on the service roads. The general concept of the parkway system, devised by master urban architect Frederick Law Olmsted in the 1860s, was to extend large parks by making the roads that connected them into parks themselves. Olmsted’s vision can be seen in Brooklyn’s Ocean and Eastern Parkways, and in the Bronx’ Mosholu Parkway and Pelham Parkway (whose official name is the Bronx and Pelham Parkway because it connects Bronx and Pelham Bay Parks).

Mosholu Parkway was built in 1888 and was originally known as Middlebrook Rd. because of its route along School Brook. In its original stretch between Bronx and Van Cortlandt Parks, it ranks along with the other parkways built in the Olmsted vision among the country’s most beautiful roadways.

The parkway was somewhat compromised in the late-1930s when Robert Moses linked Mosholu Parkway with the Henry Hudson Parkway in Van Cortlandt Park in the northwest and the Bronx River Parkway at the east. Moses, however, was rebuffed in his efforts to make the Mosholu a controlled access road and sink it in a trench in its most gorgeous stretch. 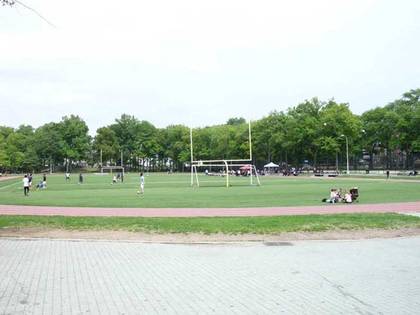 The Bronx and Byram Rivers water system was built between 1880 and 1889 to supply those sections of the Bronx not served by the Old Croton Aqueduct via pipeline from the Bronx River, which bisects the borough in two from north to south, and the upstate Kensico Reservoir. Water was stored in the Williamsbridge Receiving Reservoir, built in 1888, in Norwood northeast of Bainbridge Ave. and E. 207th St. By 1925, this reservoir was no longer needed, and it was drained and filled in. In 1937 NYC Parks Commissioner Robert Moses constructed a new playground and park in the space vacated by the reservoir, containing a running track, football and baseball fields, basketball and tennis courts, a horseshoe pit, a large wading pool, a cinder running track, a field house, and two children’s playgrounds.

The dam, as well as one of the Bronx’ major colonial-era roads (Williamsbridge Rd.), a train station, and a major intersection, was named for a bridge operated by farmer John Williams crossing the Bronx River at today’s Gun Hill Rd. in the early-1700s. The settlement that sprung up near the bridge became known as Williams Bridge, later spelled as one word. 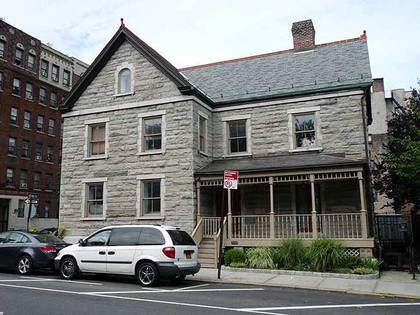 At Reservoir Oval and Putnam Pl. you’ll find the old reservoir keeper’s stone house, built in 1889. After the reservoir was drained, it became a private residence for five decades, and is now under the protection of the Mosholu Preservationist Corporation. 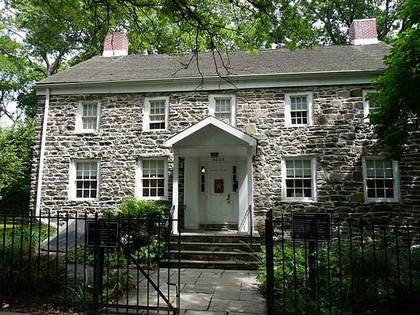 Though Brooklyn seems to have the lion’s share of pre-Revolutionary War houses, there’s one here in the Bronx, on 3266 Bainbridge Ave. that just barely qualifies. In 1758 blacksmith Isaac Valentine purchased property from the Dutch Reformed Church at today’s Bainbridge Ave. and Van Cortlandt Ave. E., and, depending on what account you read, built this fieldstone cottage either in the 1750s or as a successor to a previous home in 1775.

By 1777 the home was occupied by British and Hessians but was recaptured by General William Heath after a brief but fierce battle that left the house surprisingly intact. By 1791 the house and land had been sold to an Isaac Varian, whose grandson, Isaac L. Varian, became NYC mayor between 1839 and 1841. After changing hands several times the house became home to the Bronx County Historical Society in 1965. The house was moved across the street from its original location the next year. It’s open to the public, featuring historic and archeological exhibitions.

Interestingly, Van Cortlandt Ave. E., near where the cottage stands, was the original post road to Boston, which ran from Spuyten Duyvil east and northeast. 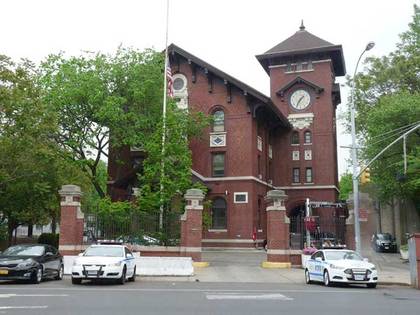 One of the city’s great brick clock towers, ranking with Woodhaven’s Lalance and Grosjean’s kitchenware factory, can be found at this police station house at Webster Ave. and Mosholu Parkway. The clock is surrounded by colorful terra cotta. The tower’s design is based on Tuscan villas.

Built in 1904-1906 to serve the 41st Police Precinct displays elements of the Neo-Italian Renaissance style and was designed by the architectural form Stoughton and Stoughton. Nearby is Frisch Field, named for the baseball’s Frankie Frisch, the “Fordham Flash” who starred with the New York Giants and St. Louis Cardinals from 1919 to 1937. 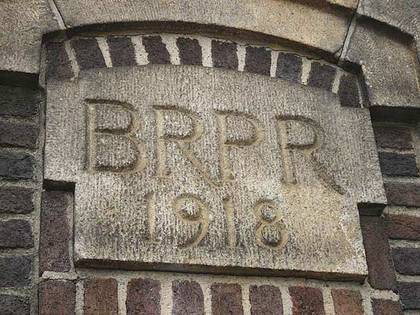 Gun Hill Rd. runs along a Native American that figured prominently in the Revolutionary War. It was a major east-west artery by then and control over it was contested feverishly. In January 1777, skirmishes occurred at Fort Washington, located then where Giles Pl. and Sedgwick Ave. would be, and then at John Williams’ bridge at Gun Hill Rd. and the Bronx River. The patriots took refuge at a redoubt (a small temporary fort made of earthworks, stone or brick) on January 25th, 1777, that was located just north of E. 211th St. and west of Webster Ave. in what’s now Woodlawn Cemetery. A monument can be seen inside the southern Woodlawn Cemetery fence north of the intersection of E. 211th and Decatur Ave. The patriots, commanded by Major General William Heath, fired cannon at the British here, which sent the King’s forces retreating. The spot became known as “the gun hill.”

Gun Hill Rd. crosses the Bronx River, New York City’s only true river, which begins as a trickle in Westchester County and empties into the East River (which is actually a tidal estuary). When Swedish pioneer Jonas Bronck settled in the area of the river in the mid-1600s, the river, which had gone by several Native American names, became known as “The Broncks’ River,” and the “the” has stubbornly remained as a prefix for Bronx borough, as well.

The Gun Hill Rd. bridge that crosses the Bronx River is marked by an inscription, “BRPR” and 1918, the date of construction. According to the late Bronx historian Bill Twomey, the letters stand for “Bronx River Parkway Reservation.” The Reservation parallels the Bronx River from the New York Botanical Gardens north to Kensico Dam, Valhalla, in Westchester County. It’s a 15.5-mile swath of parkland designed in the early years of the 20th century by the Bronx Parkway Commission.

Architect Charles Stoughton designed many of the bridges and other architectural elements in the BRPR, including this one. With his brother Arthur Alexander, in the firm Stoughton and Stoughton, he also designed the Soldiers and Sailors Monument on Riverside Dr. and W. 89th St., as well as the 41st Police Precinct building shown previously.