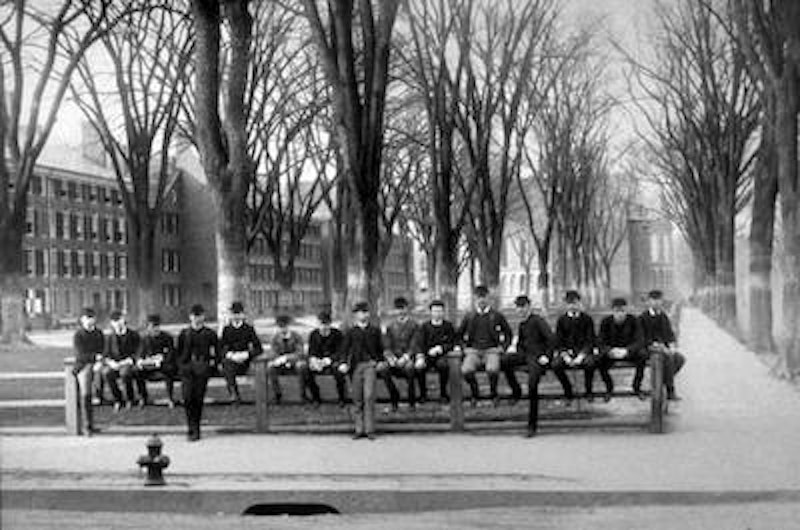 Ups and downs; checks and successes; indeed, as the fellow in a not-unamusing movie of the last century put it, strikes and gutters. The Queens pimp meets with Kim; the Supreme Court, to general surprise (certainly mine), upholds religious liberty, though it seems impossible that even a hundred million similar court rulings will have much ultimate effect in staying the secularist avalanche that has brutalized our culture; Jamie Kirchick, neo-conservative Jewish journalist and homosexual rights advocate, apparently stands a chance of getting himself elected to the Yale Corporation, Yale’s board of trustees.

All in all, a typical patchwork of the good and bad, the noble and the absurd, the thrilling and the bathetic, of the sort that characterizes this fallen life of ours.

It’s Kirchick’s possible ascent to the Yale board that most interests me here. I’m of several minds on this. In a normal culture, one in which Yale hadn’t transformed itself over the last 40 years or so into a key component in the progressive/globalist avant-garde, the presence of a Kirchick on its board would be a secular sort of blasphemy.

But ours is not a normal culture, not anymore, and Yale has transformed itself into such a component, and a noxious one. Readers of a certain age might recall that Yale was already 35 years ago known as the “gay Ivy,” functioning as a dynamic engine in the legitimation among the elite of frottage, prostate stimulation, tea-bagging (also known in some circles as “ball-sacking”), frenulum nerve friction, docking (sometimes termed “shnoodling” here in the Midwest), glans-play, and other perversions.

Against this background, the traditionalist is forced into the posture of the triage doctor, practicing a perpetual moral balancing, weighing the consequences of this bad choice against that worse one. In these circumstances, maybe traditionalist intellectuals should make their peace with Kirchick’s presence on the Yale board. Maybe he’s the best we can get.

Consider: Neocon Zionists of Kirchick’s ilk have, whatever damage they’ve done, also done yeoman’s work over the decades in doomed defense of what used be called, in a formulation that seems quaint now, the Great Tradition of Western Civilization. One thinks here of Bellow or Trilling or Bloom; but also of latter-day Upper West Side vampires such as William Kristol and John Podhoretz, who apparently retain a reverence for rigorous scholarship.

Yes, we must give these devils their due. If nothing else, traditional humanistic learning—and free speech, for that matter—will be safe in those little hands of theirs, so glabrously soft as a result of the old Talmudic injunction against manual labor. It’s very likely, then, that those who care to preserve some fragments among Yale’s ruins could do worse than Kirchick. That’s a sad comment on the level of degeneracy with which we’re surrounded—that we traditionalists should be compelled to seek the patronage of a Kirchick!—but this degeneracy is what we’ve got. We small-o orthodox Christians must live with it, even as we bear witness against it, and contest it where we can.

In other Yale-related news, as of this week I can find nothing on Yale’s web page indicating that Professor Daniel Larison has yet assumed the Miriam & Hyman J. Moskowitz Chair In Russian Orthodox Apologetics and Imperial Great Russian Integralism at Yale that, excited rumor in the paleocon community has long had it, he would be assuming this spring. Forget Kirchick. It’s Dr. Larison’s arrival in New Haven that will be the truest indication we could have that Yale still reserves a space for true scholarship in the tradition of great humanists like Erich Auerbach (another Jew, come to think of it), and that a snuffling, obscurantist White man of good Old American Anglo-Saxon stock can still prevail in the sewer of contemporary academia.

I can only assume that Dr. Larison has pushed back his arrival in the Elm City until the summer, when he’ll be welcomed at the airport by the rector of whatever is the most splendidly politicized and chauvinistic Russian Orthodox church in greater New Haven. After a miserable lunch at Frank Pepe’s, during which they’ll meditate on the Logos, Dr. Larison and his new confessor will no doubt retire to the church sanctuary to moan prayers for the political integration into Holy Mother Russia of Holy Abkhazia and for the incarceration of the fascists Alexei Navalny and Mustafa Dzhemilev by the FSB, the Sword of the People.