Flag Day: Parade Of The Damned

The extravagance of dying is a luxury few can afford. 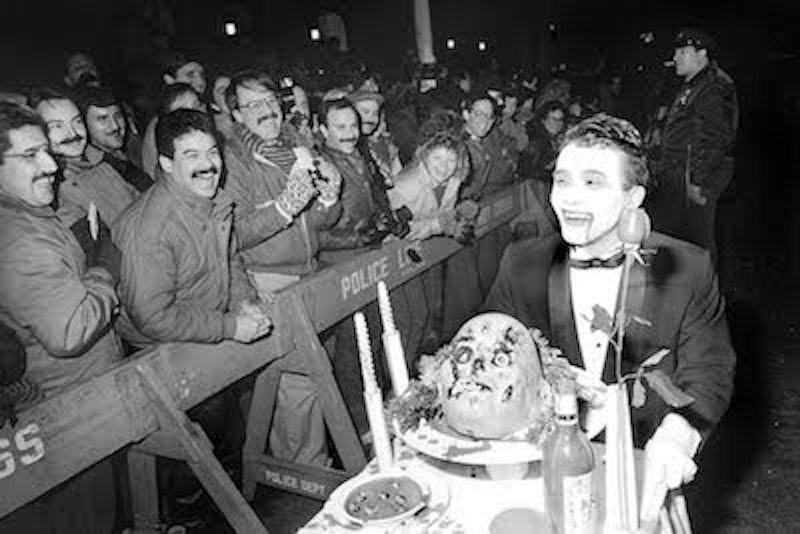 Truth’s sordid story grows uglier with time. Nobody wants to hear or see it. Warts and all. Theories abound without hard evidence to back them up. They become elaborate educated guesses. Speculations on telling just the facts accepted as common knowledge one way or another. Either way it’s the inexact science of over active imaginings. Some say we exist inside a computer simulation of a world while others condemn it, saying it's all bunk. You must be whack to believe that weirdo pseudoscience stuff. It's either global warming or the ice age happening all the time. When it’s raining here the sun is shining someplace else.

The second coming ushers in a bright future or nothing more than some weary dogma lasting till the end times. It's a kinder gentler new world order at the finale of light years beaming a radio transmission signal from a thousand rays of pointed light or just the biblical rapture upon us. The end is always just around the bend. Death is just down the road a piece. The apocalypse is a carnival ride. Armageddon on the lay a way plan. The final installment is paid for the end of days. The sky is continually falling or we live under a dome as some secret group of morons spray the clouds controlling us with drugs and manipulating the weather. Or we just have shitty weather. Pick and choose, win or lose.

The earth is off-kilter. A yo-yo world spinning up or down, out of control. The universe is a magnetic warped computer. The moon cycles control of sentient beings. The sky has fallen again. Stick our heads in the sand to ignore the doom in every face but leave our asses vulnerable, exposed for abuse in midair. Many stick their heads up their ass leaving no doubt. What is real depends on your sensibility of reality. You can dream up a better world or invent a worse one. A heavenly place where joy makes us weep with laughter. Where kindness fills all hearts overflowing with love for all living things. A pleasant planet of hope and caring. Where there's plenty of food, fresh water and clean air. Nobody’s crazy there. No one ever gets sick or old. You can stay drunk all the time and never die.

People were never very good to each other. Please and thank you are dirty words. Save ourselves if only we could and pluck out your neighbor’s eye. Throw your garbage out the car window. Around here everybody's offended by the slightest nothings. Remove all doubt. Hateful beasts in heat fucking each other over for a seat at the big table. It's so much easier to hate each other and in turn naturally hate ourselves. I don't like people anyway. I'm sure given the chance they would do me in too. Also, we’re not the best judges of anything that’s good for us. Kill their own mother for pennies. Despise the innocent. The sweet bird of youth is really an old crow. Grandma's an old hooker. The sky is purple. The grass is always orange on the other side. Loathe every stranger who speaks a different language. Tabloid newspapers are modern bibles. Daddy's high again. Relevance is no longer necessary. Gossip is infomercials of the lowest order selling each other uselessness. I think I just soiled myself.

A new regime of national idiocy. Scrape and bow to the stupid. This one here or that naked guy over there is king, I think. No right or wrong here to trip us up. Truthful lies and wholesale murder make for a better brand name product reveal. A corporate marketing launch to kick people around. The laughing stock of hell’s great melting pot. Stewing in a lumpy gravy au jus of remorse. Remember better days when a good time was had by all? Happy days are gone again. All that's left now is ignorant bliss. Barely human, vaguely aware specimens spewing vile bile at each other. Yelling slang into the mirror of emptiness. Screaming epithets. Seething contempt for all in the numbskull nation. This is what we believe. Hold these truths to be… calmer heads might prevail if only to ignore the swirl of the insane. Remain calm, stay perfectly still in madness. Bite your tongue. Stop breathing. Don’t make any sudden moves. Ignore the ebb and flow of ill tide. Stare at the sky and wonder why.

A cavalcade of mutants marching through the cities backside. Skid rows and tents line miles on the map waiting for the parade to arrive. Vacant lots across land where life once thrived. When life is cheap, death is overpriced. The extravagance of dying is a luxury few can afford. Taking cheap pot shots at dead targets is so easy, everybody carries a weapon and wears a target. A slow suicide carousel ride perched precariously on the backs of cadavers impaled on poles. The parade is coming now. You may hear the drums beating. Maybe it's just your heart thumping in your chest. Ready to jump out of your throat and fly into the street. The biggest crowd in history has assembled. Standing along the procession route waving thousands of little souvenir flags. What a spectacular mighty show of force. Sobbing for fallen heroes who die in wars that have yet to be fought. Here they come now. I can see the flag bearers. Look at all the pretty guns. Pledge allegiance. Stand at attention. Salute! What a glorious day for a parade.