Off to the Races

A visit to Ocean Downs. 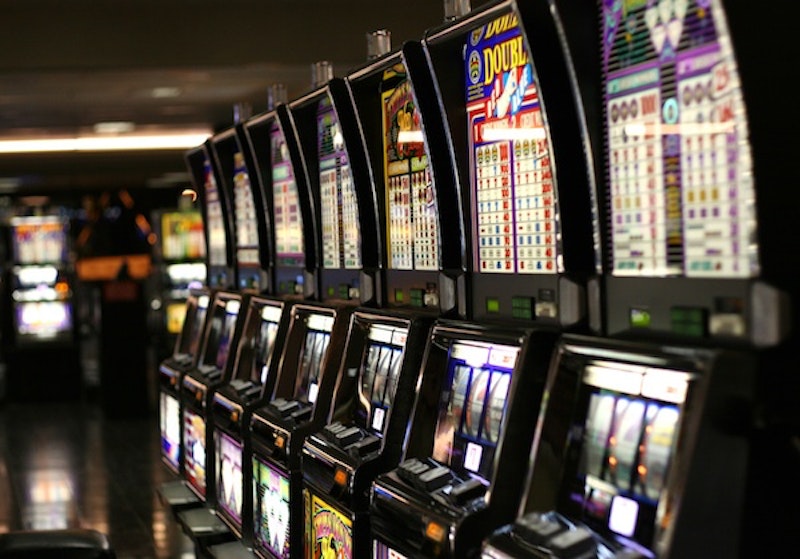 Somehow, in my Ocean City piece from earlier in the week, I failed to touch on my first exposure to legal, non-lottery gambling. Ocean Downs offers those so inclined a wide variety of ways to double, triple, or lose their money, but these approaches may be divided into a pair of larger categories: horserace gambling and casino gambling.

Playing the Ponies: The plan was ponies, then slots. But none of us had ever been to Ocean Downs, and had no idea what we were doing. So we wandered through heavily tinted glass doors into the dim, cool casino. A pair of security guards slide our drivers’ licenses through a contraption designed to prove that we were old enough to be there. In short order we realized two things: first, we had to walk through the casino, at that point, to reach the track outside, and second, we could have just walked around the casino to get to the track.

There were to be series of races, staggered by 20 minutes. A program—full of information regarding which horses would run in each race, who had bred these horses, who would pilot them, and vital statistics—was procured and perused. It was swiftly decided that we would bet on ponies whose names seemed in some way derived from hip-hop culture. The scene was ridiculous from my perspective: families with very small children and coolers, retirees puffing cigars studiously calculating odds, an auctioneer wannabe introducing the contenders and calling the races, everybody queuing up to place bets.

When we think of horse racing, we typically think of jockeys sitting tall. You’ll notice that I used the word “pilot” above, because these were not jockeyed horses; these were pilots strapped into miniature “chariots” affixed to the horses’ mid-sections that allowed them to direct the forward motion. Backseat drivers, as it were. Each race lasted two lengths around the track, which made me think of a shrunken NASCAR course.

Betting lent some significance to the three races we watched. One of my companions placed a minimum bet on “Mo Money, Mo Problems” in the first race, and won, then lost on whatever horse she wagered on in the second run. Feeling bold and wanting in on the action, I put the minimum of $2 on “That Boy Can Fly,” who proved true to his name, sweeping the third race easily and by so doing increasing my personal wealth by $1.20. Darkness had fallen, and massive field lights bathed the grandstand and the track alike. Sentries advised distracted parents that their children were not allowed to stand on the wall or climb the fence separating track from grandstand, though the pilots seemed to enjoy the attention, and then we went into the casino.

Hitting the Slots: The casino seemed so innocent and innocuous: just seniors and middle-aged marrieds perched on stools feeding coins and bills into rows of flashing, blinking machines arranged in rows. Just an overly friendly dude at the cash desk who reads your win slips carefully, slowly extracts your winnings from a cash drawer, and then counts it three times on the counter before releasing it to you, as if to say “no muss, no fuss, no tricks, we’re on the up-and-up here.” Just execrable carpeting. Just a circular bar in the middle. Just near-total darkness. Just strangers wandering around like zombies. Just an indignant guy dressing down the casino manager because the place had no “tables” to play.

I had bills of various denominations, and a number of ones, and without thinking much about it I decided that when I ran out of ones, I was done with gambling.

I ping-ponged from machine to machine, winning and losing sums so small, in equal measure, that the reality of gambling felt almost ephemeral. There were moments, though, where the failure of a particular game to give, even a little, got the better of me—then, suddenly, it was two minutes later and my wallet was $2 to $3 dollars lighter. Yet I still didn’t feel manipulated or coerced in any real way.

Ultimately I found myself contemplating a Wizard of Oz­-themed machine, and then feeding it a dollar. The player could wager the entire dollar at once, or subdivide it into a series of smaller bets. Opting to subdivide—this was the last single I had on hand—I placed bets of 20 cents here, 30 cents there. In this instance, each bet entered had the effect of expanding the pot and triggering a round robin of hallucinatory, Oz-­associated graphics to appear: rippling, 3D emerald curtains; campy dialogue from the classic film; a pair of ruby-red slippers that seemed to click their heels together for an eternity as the number of points I was earning blurred and raced, stopping dead at an apparently massive sum. Feeling breathless, dazed, and invincible, I forced myself to press the “pay out” button—surely this was going to be a shitload of money. It was not a shitload of money. It was $4.41, and it was at that moment, before cashing in the slip, pocketing the money, and preparing to find my friends and leave, that I came face to face with how seductive, flattering, and deceptive gambling can really be.