The Case Against Conversational Writing

We have plenty of time to search for the right word. 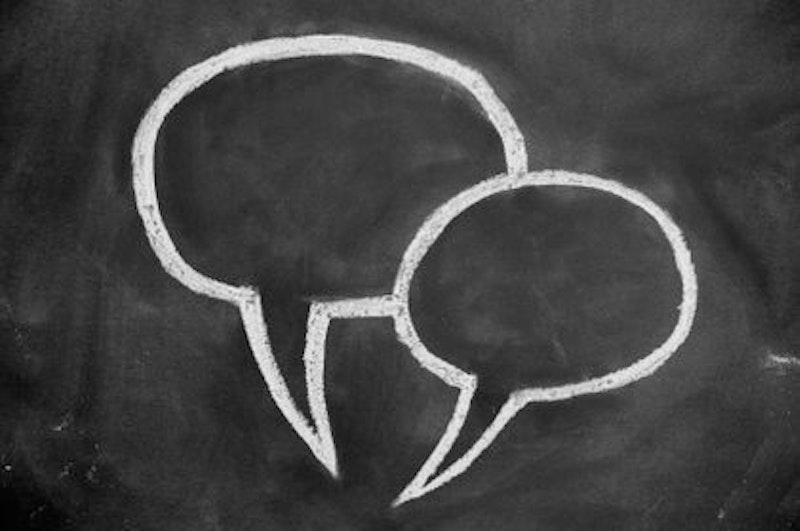 I’m in the midst of transcribing and editing a discursive, nearly two-hour conversation into a 5000 word interview, and I’m developing a deep antipathy for words such as “now,” “just,” “like,” and “so.” My subject is articulate and has a deep trove of interesting stories, but wrestling the piece into something with a clear thread is proving more difficult than I first imagined. My surprise at this is embarrassing. I’ve been telling my composition students at the community college where I teach not to write like they talk for years.

In a letter to a columnist who interviewed him in 1888, Mark Twain railed against publishing interviews, calling them “pure twaddle and valueless.” He considered them absurd, stating, “The moment ‘talk’ is put into print you recognize that it is not what it was when you heard it; you perceive that an immense something has disappeared from it. That is its soul. You have nothing but a dead carcass left on your hands.”

Scholars praise the keen ear for dialogue Twain displays in Huckleberry Finn that recent editions have bleached from the book, but even Twain would likely argue that part of his writing’s accuracy comes from the surrounding prose that replaces the lost body language and tone of voice and subsequently “loads… almost every utterance of his characters with explanations and interpretations.” For Twain, you only write like you talk when you write out the talking, and even then, that’s not enough to fully convey the intended meaning.

This fall I’ll attempt to convince another new set of students not to write like they talk in their college essays. Many of them will turn in their first assignment quite proud of what they consider a fully developed style. I’m sympathetic to their sense of confidence. So much writing instruction validates this notion that oral and written communication are interchangeable. Students hear early on that they should places commas where they would pause in their speech. The five-paragraph theme, the grand old man of writing assignments, demands students tell the reader what they’re going to tell them in the introduction, tell them in the body, and then tell them again what they just told them in the conclusion. This sort of repetition of important points is necessary to an extent in oral communication, but it is downright insulting to readers bright enough to understand a point the first time it is made.

Both of these instances of writing instruction are so pervasive because at a certain age, they are developmentally appropriate. The five-paragraph theme frees up students from worrying about organization so they can concentrate on the quality of their ideas just as training wheels once helped them focus on learning to pedal without fear of falling. However, for many students my dictum feels as if to grow as a writer they must unlearn some of their previous lessons. Their understanding of a discipline is a collection of what stuck with them over the years (a “house of lore” some call it), and by virtue of it sticking, they consider it unassailable, electing to tune me out rather than grapple with the consequences of what it might mean for them, both in my class and in others.

Increasingly, educators are encouraged to instruct students to write like they talk, or put another, slightly less problematic way, to write conversationally. Like much of the lore my students have accumulated, there’s a good lesson at the core of this advice about precision and meaning. The assumption is that in our speech we do not insert jargon or form complex sentences full of nested dependent clauses. What’s more, the real-time construction of speech prevents us from going back later and over-inflating our words with ideas that serve purposes (vanity is often implied) other than clarity. Writing conversationally is intended to mean to write clearly, or as one educator put it recently—“simple,” not “simplistic.”

I join Strunk and White in saluting such notions with a thumbs-up, but I’m also deeply frustrated by it. Telling a student that to write well he or she has to be clear has all the instructional value that “Just Do It” has for athletes. It’s aspirational more than educational. In I. Asimov: A Memoir, Isaac Asimov compares writing to glass. He notes that stripping color out of glass was “the great triumph of Venetian glassmaking art.” It took until the 17th century to master, and the technique was so valued that it was kept secret for a long time after. Asimov was often criticized for his lack of distinct style, and the point he was making in this metaphor is that writing simply and clearly isn’t the absence of style—it’s hard work, and the ability to do it is a skill.

Asimov goes on to liken poetry to colored glass mosaics: they let some light in but their primary purpose is to evoke emotion. When students attempt to write their prose conversationally, the style they often adopt, like the color in stained-glass windows, is so preoccupied with capturing the emotion and rhythms of speech that it fails to illuminate meaning so much as gets in the way of it. While it’s clear to most of us that the “conversation” of “writing conversationally” is meant as a metaphor, students often receive the advice literally rather than figuratively. In the most extreme examples, I’ll even see students insert an abundance of placeholder words—the same words I’m editing out of my interview—into their prose. We rely on these words when we talk to indicate to our listener we aren’t done, only taking a breath or composing our thoughts. In writing, however, we don’t need to worry about being interrupted and we have plenty of time to search for the right word.

Twain, in that same letter, called the idea of replicating speech in print as “an attempt to use a boat on land or a wagon on water.” This is ultimately why writing conversationally is reckless advice. Writing and conversation are different mediums with different constraints and different advantages. Speech is inherently linear. Your listener can’t un-hear anything you’ve said. If you wish to correct yourself, you have to do so after you’ve already said the wrong thing. In writing, you have the luxury to revise places that don’t seem clear and re-state them in a way that will work the first time. That’s one of the advantages writing has over speech. When we write like we talk, we impose the restrictions of the oral medium unnecessarily and toss that advantage away.

Mitch Hedberg, an American humorist from a far different era than Twain, made a similar point when describing the way comedians are treated in Hollywood. “They say, ‘Alright, you’re a stand-up comedian. Can you act? Can you write? Write us a script.’ They want me to do things that’s related to comedy but not comedy. That’s not fair. It’s as though I was a cook and I worked my ass off to be a good cook and they said, ‘Alright you’re a cook. Can you farm?’” There’s a reason that speech and writing classes are kept separate. They are different skills and, while related, they don’t necessarily transfer from one discipline to the other. Yet this dissonant conflation of writing and talking is what we’re doing when we encourage students to write conversationally. It doesn’t make sense, and as Hedberg whines, “[I]t’s not fair.”

One of the primary reasons I see educators advocate for a conversational style is because they are horrified by the garbled academic jargon these students come up with. They struggle because they’re being told to join a conversation taking place in a genre they don’t fully understand. I agree with many of these critics that positioning academic writing as the end goal for student writers is misguided, but I also believe that recommending students write using a set of conventions inherent to a different genre (in this case oral communication) is tantamount to committing precisely the same error.

Few students will go on to write academically, but all will write in one form or another. In fact, they are likely to write within many different genres in their lifetime. By genre I mean a writing situation with its own inherent set of conventions. In this way, an email is a genre; a recommendation letter is a genre; an obituary is a genre; a review is a genre; the list goes on and on. I’d argue the grocery list is itself a kind of genre. It seems like a difficult concept at first, but here is where students’ comfort with conversation becomes an asset. Once they are reminded that they speak differently with their mother than they do with their friends, they realize that speech has different genres too. It’s a short step from there to help them begin to recognize the existence of conventions in writing.

The task of writing teachers shouldn’t be to teach style (conversational, academic or otherwise) but to teach students how to navigate these different genres with the goal of recognizing and employing the conventions therein. Yes, this includes some academic writing. College students are likely reading and trying to make sense of it anyway. The moments that strike them as foreign or stilted are the exact places they should be focusing on as their confusion is very likely due to the genre’s unfamiliar conventions. In this way, we are not teaching them to write in a way that they may or may not go on to use, but we are giving them the skills they need to join the conversations happening in the world around them and participate to the level they so choose. Like taking color out of glass, it’s difficult work. It can’t be boiled down to a catchy slogan. However, this is the kind of writing advice they won’t have to unlearn a few years later, but only, if they’re like me, need to be reminded of from time to time.