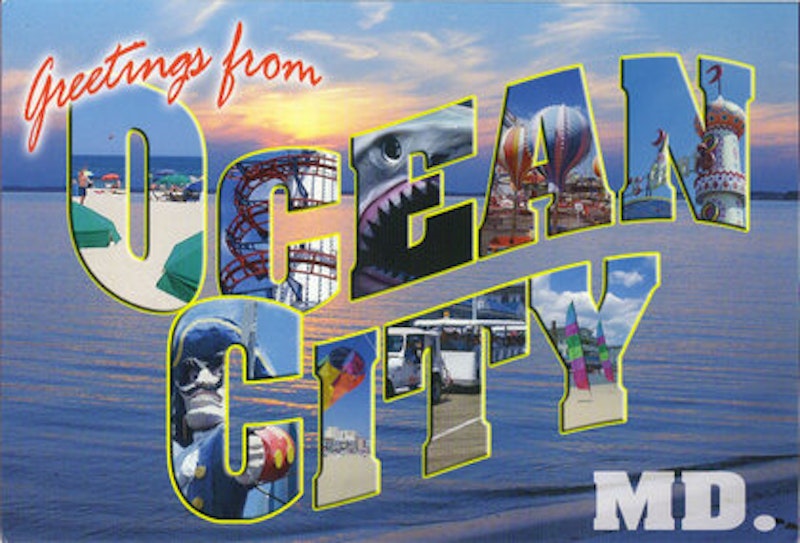 Returning to Ocean City after a decade—not as a student or a husband, but as a single guy, an adult—is a revelation. The place feels exciting, picayune, and a bit sad, all at once; it’s mostly as remembered, yet radically different, too. For four days I vacationed there, with my college friend Raven and her significant other, Beth, and while we had a wonderful time, departure was a relief.

So Big Johnson T-Shirts Are No Longer a Thing: Now the dozens of interchangeable t-shirt shops on the Boardwalk just peddle t-shirts featuring slogans like “Sun’s out/Guns out” or bush-league memes. Improbably, the present vogue appears to favor black t-shirts instead of the white shirts of yore, which seems kind of stupid, given that it’s summer, and summer is hot, and generally the heat and humidity are worse than they were when I was a youth, but whatever.

Postcards: I sent just a handful this time, to people who would notice.

The Weather: The weather sucked, alternating between overcast and intermittently rainy, until the morning when I had to check out of the hotel and drive five hours back to Lewisburg.

Accents: Time was, the work visa teens and twentysomethings behind counters were uniformly British, Scottish, or Australian; now, they’re invariably Russian, Ukrainian, or otherwise Baltic, which is fine because those all accents are crazy delicious to these ears.

The Hotel: I stayed at a dive hotel on the inlet edge, not far from 1st St. When you book a hotel in a resort town, even two months ahead of time, securing a reservation at a relatively reasonable rate feels like a coup. How lucky, you think. How fortuitous. Then you get there and open the door to your room, which slams into the dresser and somehow turns on the television because the room is as small as a prison cell. The bathroom may as well have been a closet. There were no spare electrical outlets, so to charge my iPhone I was forced to unplug the mini-fridge. Ah, well; we get what we pay for. On the plus side, a sliver of shallow beach lay feet away from the hotel, and the Boardwalk was nearby.

Salt Water Taffy: Still available, but kind of over, unless you’ve got good teeth. I passed on it.

Used Bookstore Scores: Hard to figure, but there are still a few used bookstores in Ocean City. So I went in on a book of Andy Rooney quotables for Dad, Stephen King’s The Drawing of the Three, a Norman Mailer paperback, and various issues of New Mutants from the original run.

Drinking Semi-Copiously: If you’re going in for Olympic drinking, it’s important to train beforehand; I did not train enough. I was not ready, not really. We hit the ground running the night I got there anyway: assorted beers, something called “a flaming Jesus” (don’t ask), a variety of shots. To be fair, I needed that, but, in no way was I ready for the world to spin that hard (it’s a miracle I never blacked out and can recall every nuance) or to spend most of the next day struggling to recover.

Minnows: Is this minnow spawning season? One night I took my shoes and socks off and waded out into the shallows outside of the hotel and the little fish were everywhere, rushing hither and yon in little schools, which was fascinating but a little uncomfortable. It was hard not to feel self-conscious, wading there; it was too cold, before long I pulled back and sat on a wooden wall and watched the water until Raven and Beth returned. In daylight the seagulls feasted like gluttons.

Local Cuisine: I ate a ridiculous amount of seafood at a variety of places I couldn’t name if you paid me: a filet of Andouille-encrusted grouper, amazing fried oysters, a decent crab cake. Somehow I devoured a mammoth burger that could choke a baby hippo, put away a small order of Thrasher fries, slurped up a delicious Dumser’s shake, erased two slices of Dough Roller pepperoni pizza, queued up for killer Fractured Prune donuts that were jaw-droppingly overpriced. No wonder I wound up with two fun-annihilating stomachaches that limited my alcohol consumption on the second two evenings there.

Ocean Gallery: Somehow I’d never ventured into Ocean Gallery before, and since at least five people told me it was in danger of closing forever, I figured it was probably time. If you have walked the Boardwalk, you have noticed Ocean Gallery; you can’t miss it, and it might have frightened you. Words can’t quite do justice to the exterior, but it looks like a meth smoker’s three-day open-air art project.

The interior is wall-to-wall paintings, canvases, posters, and prints, every blessed inch damned with frames atop frames. It’s exceedingly cramped, and it’s impossible to look at everything, and if you ascend the stairs to the upper level, where there’s some sort of framing operation, you’re struck by how rickety the structure feels; basically, Ocean Gallery is anti-consumer friendly, a gruesome caricature of the traditional gallery experience—albeit staffed by extremely friendly and knowledgeable people who are apparently trying to turn the place into a reality show. A Jackson Pollock-esque canvas beyond my budget caught my eye; fortunately, there was a print of the thing available for a quarter of the price, and now it’s inclined against a far larger and more expensive abstract art print I bought here in Lewisburg, both of them waiting inanimately for me to finally hang them somewhere.

The Essential Sadness of Ocean City and Its Schlocky Largesse Are, Perhaps, Interchangeable: This isn’t something you notice as a younger person in Ocean City. As a younger person, you’re trying to swim, party, get laid, or you’re getting off on doing Ocean City solo, no parents, going where you want. There’s some money in your pockets, maybe, but never quite enough; you can eat, and stay somewhere, little else. You envy older strangers their possibility; you wish you had more friends; it sure would be nice to live an exciting life, hit the higher-end restaurants. Ocean City as a younger person seems full of wonder and possibility.

Then suddenly you get older and have friends there with you, and enough money to pamper yourself. You have become the older stranger, and everything looks different. Living in the moment is harder than it used to be and that realization stings more, because you now have a newfound respect for the joys and tragedies of life, and are aware that time passes viciously. Every stranger’s face tells a story that you can half-read, and most of those stories are sad ones. Take the OC bus, and watch them. Or don’t—but take the bus anyway, and consider its mix of pure wack tourist festivity and resort town wage-slave drudgery.

The streets and facades change hands and banners but are, essentially, the same—a cauldron of commerce in a state where commerce seems to be dying on the vine everywhere. But by and large, it’s a tacky, neon commerce—a sub-Las Vegas commerce designed to exploit buyers and sellers alike, and after more than a day or two, it gets tiring. You actually feel a little embarrassed for the place. On the postcard I sent Dad, I wrote, “Now I think I finally understand why you always go to Rehoboth.”

Hot Accessory: While I wasn’t paying any attention whatsoever, sweatshirts like this one apparently became enormously popular.

Swimming in the Ocean: I got to do this just once, on Saturday, off of Assateague for maybe 15 or 20 minutes, but the water was too cold, the sun too remote. So I collapsed onto the rainbow towel I’ve had since childhood, waiting for the rays to find me. They did, but infrequently, and so I gazed balefully out at the crashing surf and leafed indifferently through Stuart Woods’ L.A. Times until it began to rain and we packed up and dodged piles of pony dung and rinsed the sand away and left the beach.