A short visit to a small state. 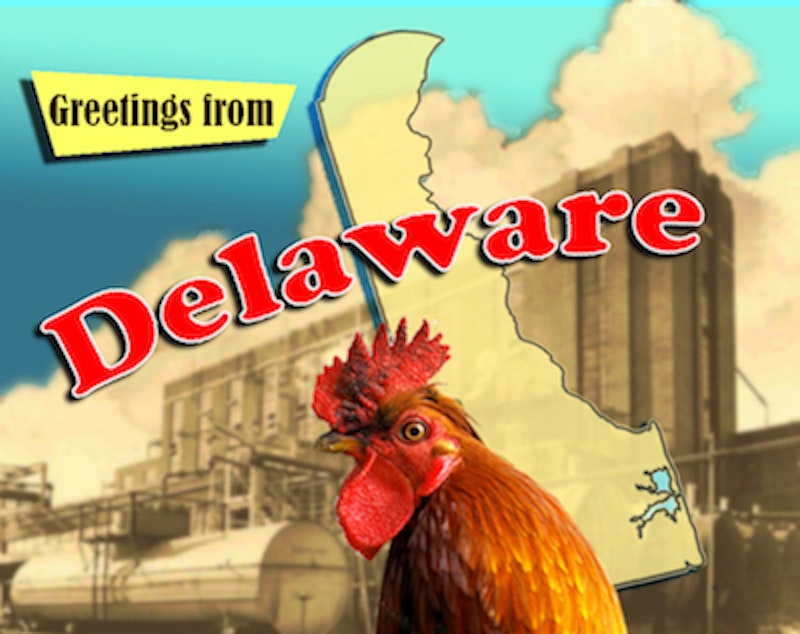 A recent, quick bus trip through Delaware required some research about a scrapped tourism slogan the state once ran: “Delaware, Small Wonder.” In 2015, the Delaware Tourism Office replaced it with a tourist-friendly tagline, “Delaware: Endless Discoveries.” The old slogan worked, the place still has me wondering. Delaware’s hard to figure out.

Here’s how it went, my visit starts with a standard “Welcome to Delaware” highway sign at the state’s northern tip. A few hundred yards away on the same road, there’s a much smaller, colorful sign, “We Sell Products that Kill!” It’s an ad for a local exterminator. That sign says a lot. There’s a hidden, provincial shyness about Delaware whose state motto proclaims: “Liberty and Independence.”

Late in the afternoon, the bus makes a rest stop at a Royal Farms. This is of particular interest for those who like getting fried chicken from a convenience store gas station. I indulged. Outside on a break waiting for the bus to refuel, I took a deep breath and looked up at a big, beautiful blue sky. I thought, “This is good. Here I am standing in the “First State” where the flag first flew after a Revolutionary War battle, where the DuPonts make their fortune and frankly, home to some perfect chicken.” What gives?

Maybe it’s how tiny Delaware keeps its big business operations opaque. Many banks have corporate headquarters here. In fact, it doesn’t matter what the business is, more companies are incorporated in Delaware than there are residents. According to Delaware Online, “International companies account for 82 percent of non-Delaware businesses incorporated within the state.” There’s even online services that offer to “form your company now!” with $100 off summer discounts.

Yet, Delaware remains small in many ways. The population is under a million. Set on the Delmarva Peninsula in the Northeast, the petite landscape is 96 miles top to bottom and 39 miles at the widest point. There are three counties: New Castle, Kent and Sussex, the smallest number of counties in the U.S.

Geographically, it’s a flat level plain with occasional slopes. The highest point’s located in Centerville; 475 feet above sea level. The soil consists of a sandy loam. The general climate makes it ideal for poultry and agriculture, characteristics important to Delaware’s identity.

Back to the road trip, taking the Delaware Memorial Bridge south connects to a main highway, Route 13. Below on the east side of bridge, there’s an ominous 1445-acre industrial complex, gleaming in the bridge’s shadow along the Delaware River shoreline.

Chemours is DuPont spin-off. This facility is a massive chemical wastewater treatment plant located in Deepwater, NJ where toxic waste is transported, processed and “neutralized” from carcinogenic and radioactive material.

Teflon was discovered here by accident in 1938. The new synthetic plastic was immediately put to use on a secret government project. Teflon lined the gaskets and seals on the Manhattan Project’s uranium tanks. No surprise, the Delaware River is ranked the fifth most polluted river in the US.

Historic Wilmington was a key hub for abolition societies and the Underground Railroad. Born a slave on Maryland’s nearby Eastern Shore, Harriet Tubman and fellow abolitionist Thomas Garrett helped hundreds of men and women gain their path to freedom. Both are commemorated with a dramatic bronze statue located in downtown’s Riverfront Park.

Across the street from the park is the Amtrak station where former Vice President Joe Biden boarded the train to Washington, DC on a regular basis. The landmark building’s recent brick, brownstone and terra cotta restoration bears Biden’s name.

In the summer months both roadsides of US Route 13 are lined with vast, green fields of corn and soybeans. Driving through Sussex County on a hot day, you’ll quickly realize there “really” are 200 times more chickens than people in this state. But what’s tougher on the nose is the unseen; it’s hard to believe Delaware’s residents breathe some of the highest ozone levels in the U.S. Most of the pollution comes downwind from out of state sources like power plants.

Before the Europeans, Delaware’s original inhabitants were the Lenni Lenape and Nanticoke tribes. The Lenape nation were eventually forced to vacate their land in 1737 by the sons of William Penn in a land swindle known as the “Walking Purchase.” Today the only reminder of the indigenous tribes are the names of streets and waterways.

There’s one family synonymous with Delaware: the DuPonts. The DuPont Company is known for manufacturing industrial chemicals like nylon, sulfuric acid and other synthetic pigments. For centuries the family’s legacy in Delaware’s politics and philanthropy has formed the backbone of the state’s cultural and business identity.

In April of 1804, E.I. DuPont began making gunpowder in Wilmington. E.I DuPont was a pillar of society in his day. One can see there’s a look of concern on his face in the 1831 portrait by artist Rembrandt Peale. By 1910, DuPont was a manufacturing giant, the company published a “Farming with dynamite” brochure toting the benefits of dynamite use for tree stump removal.

Dover is the state’s capital pinpointed around the middle of the state. On the horizon, huge dark military cargo planes fly over wildlife refuges into to Dover Air Force Base. Inside the planes, flag draped coffins of fallen U.S. soldiers returning home for burial.

The Delaware State Police are notorious for speed traps along Route 13. As you approach a town, posted speed limits will suddenly drop. Fast movers beware; enjoy the racing at Dover International Speedway with other loyal NASCAR fans. Delaware has no state pro teams.

Within an hour you’re in Seaford. The town is aptly named because when it floods, which it often does, you might end up wading through three feet of water at the local Food Lion supermarket lot.

In 1939, Seaford was home to the world’s first nylon plant. DuPont had perfect timing, nylon boomed during World War 2 with parachute production. At its height, the six-story Seaford plant ran 24 hours a day, producing enough yarn for an estimated 64 million pairs of stockings.

Now for the good stuff. Another road sign announces, “Beaches” with a big white arrow pointing east. Head towards the Atlantic Ocean and you’ll find the pearls of Delaware; the sandy dunes of Bethany, Rehoboth and Dewey.

Eventually at the Lady Bug state’s southern border, there’s the divided town of Delmar. The little town too big for one state, destroyed by fire twice, half the town’s in Delaware, crosses the invisible Mason-Dixon line and the other half’s in Maryland, hence the name.

That’s complicated Delaware from my perspective; a rich agricultural tradition with an abundance of rambling marsh and wetlands, bookended by industry and banking. It really is, “Delaware, Small Wonder.”