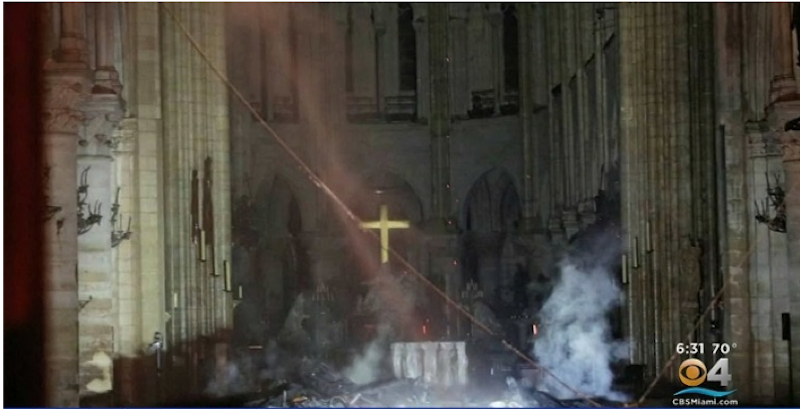 You don’t need to be a Catholic to find yourself affected by the fire that devastated Notre Dame this week.

Here in rural Indiana, one former Catholic—a bitter former Catholic at that, one who left the SOW OF ROME in spiritual turmoil when it became clear that his Vatican hierarchy had nothing to say about the campaign of sodomy that his priesthood was systematically waging against little boys in the parishes of the world—found himself obsessively replaying YouTube clips of the collapse of the cathedral’s spire. He found himself, too, slobbering into his sleeve, wailing in misery, blowing huge ropes of snot into a succession of handkerchiefs while Mother, attentive to her wifely duties, busied herself on her knees under the desk at which he sat, rubbing his feet.

He, of course, is none other than yours truly, Harris—moi-même. And lest you think that I’m getting sentimental, consider that an outpost of a corrupt and sexually deviant Vatican is the least of the things that Notre Dame has been. It’s also been the psychic center of the great French nation, which even today measures all distances throughout France, including its overseas départements, by how far they sit from the Cathedral in its ancient position on the Île de la Cité. It’s been an artistic marvel: a fine artifact of the High Gothic, even if not quite in the same league as the cathedral at Rouen. And it’s been a warehouse of objects sacred to the French, or that used to be sacred to the French, including the crown of thorns acquired by Louis IX, hallowed St. Louis himself, and the wonderful rose windows of the eastern facade.

For those of us who revere France as, historically, that nation second in sublimity and cultural attainment only to the Great Russian, to watch the mighty cathedral fall was a trial indeed.

And all the more so for the symbolism of the fall. A contemporary France that has given itself over to secularism and impiety; that has traded its Catholicism for idolatry at the triune altar of Liberalism, Sodomy, and the Market; the elite of which has presided over the replacement of its native-born population with millions of Mohammedens from the Maghreb—such a nation might well find itself symbolized by the flaming holocaust of the cathedral.

Yes, by midnight on the evening of the 15th, the symbolic ritual had been played out: France was dead. Europe was dead. Civilization itself was, after a long and miserable decrepitude, dead.

And then, shining in the smoking ruins of the altar was a miracle, an Easter Week miracle—THE CROSS, THE CROSS!

At this point, seeing the above photograph on my computer monitor, I fell to the floor to kneel amidst my own phlegm, and, making the sign of THE CROSS, clasped my hands together with Mother’s, bidding her recite with me that prayer that she and I, as Catholics, once loved so well. Together we intoned:

Who didst will to hallow the standard of the life-giving Cross by the Precious Blood of Thine only-begotten Son;

Grant, we beseech Thee, that they who rejoice in honoring the same holy Cross may rejoice also in Thine ever-present protection.

Through the same Christ our Lord.

No, I have no plans to leave the perfections of Russian Orthodoxy and return to Rome. But it seems to me that the French, witnessing, on that day of conflagration, the workings of His grace, culminating in the MIRACLE OF THE HOLY CROSS, will be tempted towards their redemption.

Yes, take it from the optimist Harris: that moment when THE CROSS was revealed by the beam of light shining through the breached roof of the Notre Dame ambulatory will stand as the moment at which a once-noble but now fallen French nation begins its rebaptism into the Catholicism it had, it thought, so thoroughly discarded.