Euell Gibbons Got Nothing On Me 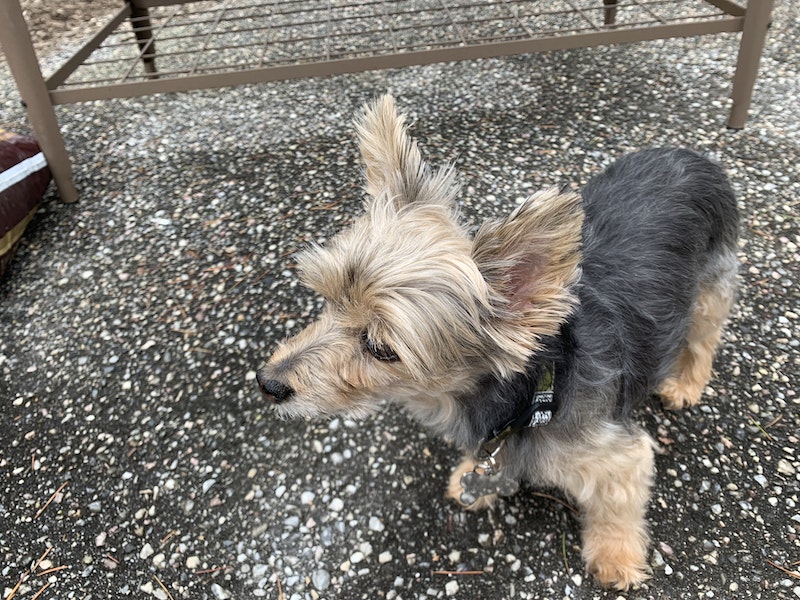 There’s a bit in Karl Geary’s debut 2016 novel Montpelier Parade that cracked me up. The protagonist, Sonny, is at a Dublin museum with his hooker friend Sharon, who wants no part of the cultural moment. Both dirt-poor Irish teens, Sharon says, “What are you supposed to do here?”

Sonny: “I don’t know, look at the pictures.”

Sharon: “I already looked at them.”

Sonny: “Look at them again.”

Sharon: “Why, have they changed?”

Look at them again. It’s a function of age, perhaps, but I now look twice and three times at rabbits, blooming trees and even, with appreciation, the squirrels that try in vain to open the lid of our garbage cans. Never would’ve done that 25 years ago. The other day, just after dawn, I was in the back yard, and saw four bunnies playing a Peter Rabbit game, not paying attention to me as they raced from bush to bush, and then jumped over one another. The performance was far better than a lot of the plays I’ve seen at Off-Broadway theaters. And then the neighborhood fox, skulking at the outer edges of the property, looking scraggly but not mean, scooted away once he tried, and lost, to stare me down.

Just before hitting the sack, I step out on the porch for a smoke, and if I’m lucky, hear the last whistle for hours of an Amtrak pulling into Baltimore’s Penn Station. I also look up at the sky to trace planes just after takeoff from BWI or a private airport. And, of course, in the summer, I listen to crickets and am mesmerized by lighting bugs. (That I also did as a youth in suburban Long Island, trying to catch as many lightning bugs in a jar, as if I were constructing a Paul Revere-lantern.)

On Sunday, my wife and I looked out our bedroom window in the morning, staring at one of our trees, in full day-glo pink bloom, and she said it was at its peak. Sure enough, with a windstorm on Monday, petals were scattered all over our lawn, and we both regretted not taking a picture of the tree when it was perfect. Then again, I’m not sure what we’d do with those snapshots; probably 50 people I know on Facebook posted similar flora over the weekend, so just seeing it was worthwhile. Oh, and the daffodils were drooping, which bummed me out since at our makeshift garden in Huntington those were the only flowers (aside from azalea bushes) that put a zing in the postage-stamp yard. And at nearby Sherwood Gardens the tulips are now all sprung, which, in the next two weeks will bring walking tourists to the area, and my son Booker will reprise his annual rant about the “gawkers” who snarl up the traffic.

We’ve got tomato and herb containers set up in the back yard—Melissa’s the gardener, I just cheer her on—and over the weekend she and our dog Celery spent a few hours getting everything assembled. (Melissa’s handy: long ago, maybe 1991, I purchased a toolbox at Canal St.’s Pearl Paint for her birthday, and it was a serious feather in my cap.)  That’s not quite accurate: Celery, of indeterminate age, as well as toothless and nearly deaf, just kept sentry and was rewarded with liver snaps every now and again. We’ve had Celery for a year now, and she’s acclimated to the new climate and terrain after growing up in Malibu.

One spring afternoon last year, I let Celery off her leash to explore the plants, figuring her slow gait and timid demeanor would keep her in one spot. Wrong! She took off like a greyhound at a Florida racetrack, and it took me almost an hour to corral the critter. Once you go under fences and away from our tranquil neighborhood, there are busy streets and the last thing I needed, one week after her arrival, was for Celery to wind up as roadkill. I’d have resided in an outdoor doghouse had that occurred, but luck was on my side and I finally snagged her a mile away, like she was John Dillinger or Patty Hearst.

Not everything works out when the weather turns. Two Saturdays ago, at 7:30, I was in my third-floor office and heard a tremendous crash, and catapulted down to the kitchen like I was 15 again. My wife, who was cooking dinner, was shaken and cursing, as the floor was covered with glass. It was an errant lacrosse ball from a buddy of our next-door neighbor’s son, and so I went outside to inspect the damage: the lousy shot had taken out both windows and, glad to report, no one was hurt. The perp, a prep-school teen, who I’d guess won’t be fielding athletic scholarship offers from the scouts who descend on Baltimore during lacrosse season, was a complete gentleman, and was about to turn on the waterworks—which I hate—until I assured him that accidents will happen (whether he’s heard of Elvis Costello is doubtful) and he should calm down.

Not that I was in an immediately forgiving mood—Melissa’s blood pressure nearly punctured the ceiling—but after the situation was assessed, I remember knocking out a small window at Bobby Ringer’s house on Strawberry Lane when I was 11 with an out-of-control fastball (needless to say, my average sporting abilities weren’t even listed on my college resumes). And, as it turned out, we had the damage repaired—a $565 job—which the offender’s mortified mom paid right away.