My Cat is Disgusting 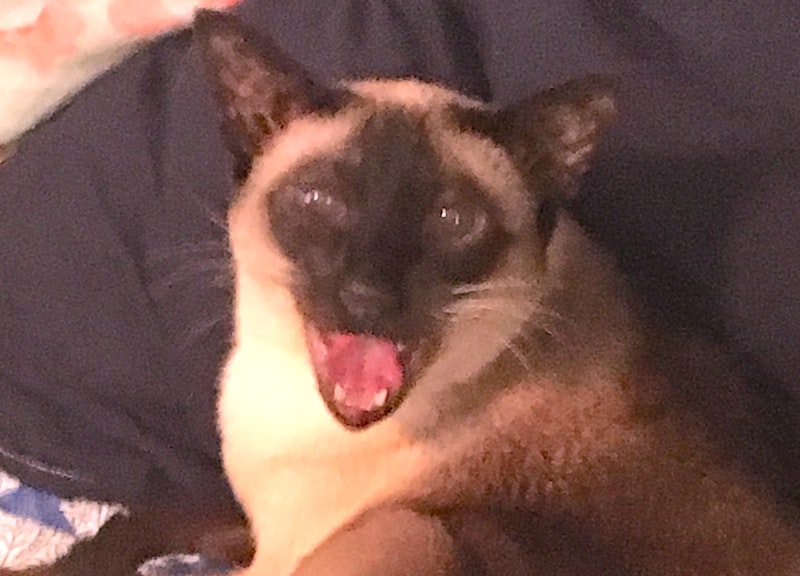 "AAAGH!" my son shouted from the other room. I rushed in and assessed the situation, and said the only appropriate thing. "AAAGH!"

Our cat, Webley, had unhinged his jaw and spewed an astonishing quality of yellow, foul smelling liquid onto the living room floor. He looked up at my scream, shook himself, coughed, and spat out some more.

"Why, Webley!" I asked, in agony. My wife helpfully called from downstairs, "You're cleaning that up, right? I'm not going to do it." Fair: she’s cleaned it up before. This is life with our cat now. Once every other day or so he decides a large portion of his stomach bile would be better off on the outside than inside, and proceeds accordingly. Often he chooses to do this while he's on the bed, befouling sheets, comforters and pillows. He sleeps snuggled up to my wife, usually, and has vomited on her more than once.

Our kitty was not always a demon exorcist cat. But horrible things happen when you get old. Webley is 16 now, and he’s experiencing disastrous system failure. His kidneys are just about shot, he's got arthritis, and he probably has lung cancer. Nothing works right anymore. He vomits all over the place because the kidney problems leave him dehydrated, which makes him nauseated. He's lost about half his body weight over the last year and a half. He used to be a portly, seal-like Siamese, tubular and plush. Now he's all angles and bones. You can feel his spine poking through his fur.

You could say he's become more disgusting as he's grown older, and there's something to that. But the truth is that this is just the latest in our longstanding struggle with his bodily fluids. When he was a little weird space lemur of a kitten, all soft and white and sleek, he’d suck on his tail until it was slick with spit. If you put a damp tail in cat litter, you end up with a damp tail that has a lot of cat litter stuck to it. Then he’d drag that same tail into bed with us.

But that was nothing compared to the excitement after we got him neutered. He was fitted with a head cone to keep him from tearing at the stitches. Unfortunately, he was such a slender, oddly shaped cat that the cone couldn’t contain him. We came home one day to find him trotting towards us, cone covered in blood. Unsurprisingly, he got infected. Someone had to clean the pus and blood out of his scrotum. And by "someone" here I mean the people with opposable thumbs.

There was something of a respite in his middle age… though for the past five years he's been semi-regularly peeing on the bed. Maybe this is related to his kidney troubles. Maybe he just got too lazy to go to the litter box. Who knows? Cats are mysterious, and so is their pee.

Not every memory of Webley involves disgusting emissions. Even now, he’s often a sweet, loving, not especially damp presence. As he's gotten older, thinner, and chillier, he's taken to burrowing under the covers for warmth. He'll crawl onto my legs under the covers and nuzzle down while I'm working, or insist on sitting on my wife's chest. We can forget for minutes, and sometimes hours or even days at a time that inside the warm cat there is an inexhaustible well of spit-up yearning to breathe free.

It gets worse as you age. Death for most of us isn't a dry skeleton. It's unidentifiable gristle and ichor. Webley's heading that way now, careful little step by careful little step, pausing occasionally to retch. We'll clean him up until he gets there.