Blinded by the White

A critique and defense of Bret Easton Ellis’ first book of nonfiction. 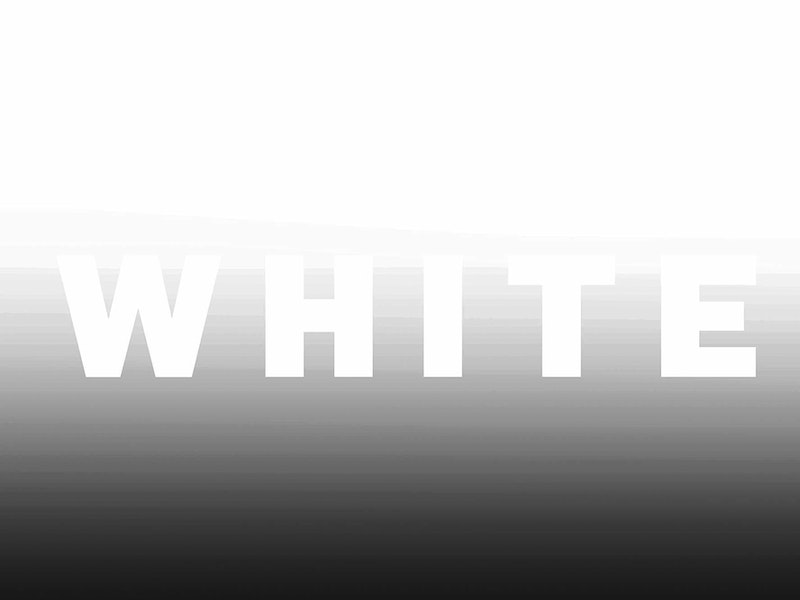 I feel nasty tonight, I don’t want to, I don’t revel in it (I’m not a “troll” or a “hater”), but I can’t shake a couple things: the rote outrage over Bret Easton Ellis' disastrous interview with The New Yorker last week and his new book White, which no one read before slamming it on Twitter; and a conversation I had earlier this week about Grimes and whether or not she's "betrayed her roots." She has a new interview out (presumably her preferred form of artistic expression these days, having replaced releasing albums and playing live a long time ago), and in it she continues her heel-turn nearly a year after stepping out with Elon Musk at the Met Gala. Her reputation took a nosedive: the noise kids that played warehouse shows with her and liked Visions laughed, more still were stunned, and because Grimes never caught on as a pop star, no one else cared. She was left only with her rabidly devoted core fanbase (sound familiar?).

Crack asked, “Where does she go from here? The answer, to Grimes, is simple. 'If I’m stuck being a villain, I want to pursue villainy artistically,' she says. 'If there’s nothing left to lose, that’s actually a really fun idea to me. I think it has freed me artistically. The best part of the movie is the Joker. Everyone loves the villain. Everyone fucking loves Thanos. Let’s make some Thanos art.'”

Still taking in that Joker line… she sounds twisted. So Grimes is making an album about how “awesome” climate change is. So what? The notion that artists need to be virtuous, morally correct, politically astute, or even smart is ridiculous. It’s such an art-negative outlook, and ironically, one that places much more importance on the artist than the work itself. People do nothing but separate the art from the artist that made it, examining them instead.

Now Grimes joins Billy Corgan, Lena Dunham, and Bret Easton Ellis in the modern pantheon of pariah provocateurs, or “overgrown trolls” depending on whom you ask. “So fucking what?” is the refrain that runs through White, Ellis' first collection of nonfiction. “So fucking what” to spineless actors, enforced endorsement of Moonlight and Selma, recreational outrage, and finally the election of Donald Trump. But you’d be forgiven for thinking this book is all about “45,” or “Voldemort,” or whatever Maddowites are calling Trump these days (my thoughts and prayers go out to them in this tough time, after the surefire bombshell Mueller Report came to nothing. Truly, I am sending love).

Ellis bangs the drum of aesthetics over ideology, and how unfortunate (and scary) it is that this way of creating and consuming art has flipped. Grimes gets raked over the coals for daring to be a contrarian about climate change—on an album. She’s not a role model, she’s an artist—her record may very well suck, but the rush to condemn her for dating Elon Musk and not being a “by the book socialist” has nothing to do with music.

You’d be forgiven for thinking White is 261 pages of privileged white male screed against Donald Trump’s “haters” after reading that New Yorker interview. But Trump’s name isn’t even mentioned until more than halfway through the book, and most of White consists of recycled monologues from Ellis’ podcast refurbished as essays. He picked some good ones: interviewing actors and their reticence to divulge or say something “negative” for fear of reprisal, the composition of American Psycho in the late-1980s and the controversy upon publication, his haunting recollection of the summer leading up to 9/11 and the day itself (walking out of a doctor’s appointment in Union Square unable to forget the “insanely blue sky” just after the first plane hit), and how it instantly put an end to the “Empire,” his favorite coinage for the pre-digital age and attitude. Fans will enjoy it, because so much of Ellis' appeal is in his voice. He could write detergent copy and make it interesting.

But if you've listened to his podcast, there's not much new in White, and though he's always compelling, I disagree with him more often than not when it comes to movies and especially politics. The middle essays in White are its weakest, predictable and lame takedowns on millennials ("Generation Wuss") that are hopelessly dated because they've been cannibalized from monologues he delivered years ago. He rails against the "fascistic dogma" of the left while riding some of the same rails as idiots like Ben Shapiro, Dave Rubin, and Jordan Peterson. "Snowflakes" and "social justice warriors" are frequently used without irony. How disappointing to see a gifted stylist like Ellis succumb to the favored clichés of the most uncool people in the world.

But he's not a bigot, and White is far from alt-right junk despite the apathy Ellis admits and the ignorance he doesn't. Even so, everyone lost their mind after the New Yorker interview, proving Ellis’ point about our “deranged” present moment, where everyone screams out of context. I even saw one person insisting that, “No one reads AMERICAN PSYCHO—they watch it. mary harron made a classic film out of a middling book and it permanently shattered butt easton smellis' dainty psyche.” I doubt this person has read American Psycho because Harron’s film is adapted word for word and scene-by-scene from the book. I even saw someone on Twitter say something to the effect that, “for every young woman who comes to me without the confidence to write just one book, I tell them there are morons like Bret Easton Ellis and garbage like American Psycho that get published.” How condescending, as if all women have to struggle put pen to paper or type a 500-word article without breaking down in despair.

Ellis “got punked” by The New Yorker because he wasn’t prepared. Isaac Chotiner got Ellis down on the ground and boxed his eyes in with that interview. After hectoring him about all of Trump’s major mistakes, Ellis responded “I think you are leading me into things I am not particularly that interested in.” Chotiner: “Which is what, everything you wrote your book about?”

I wonder if Chotiner read White, because there are only three essays that Trump figures in. But instead of pointing this out, Ellis fumbled and gave Chotiner a win for the idiots. “It’s interesting to have that back-and-forth pull in an interview. The only problem, however, is that I am not that political, and so, when we have this conversation, and you confront me with certain things like this, I really am, I have to say, at a loss.”

White isn’t about Trump, but he sells books, not memories of coke with Basquiat or discursive movie reviews or even examinations of “Empire” movie stars like Richard Gere, Tom Cruise, and Charlie Sheen (who really started the “post-Empire” era with his unbelievable public meltdown and media tour in early 2011. This, coupled with the Arab Spring, made CNN more captivating than ever).

E. Alex Chung (who’s ridiculed in the book for his idiotic Vulture piece “The Sad, Surreal Experience of Seeing an Audience Laugh at Moonlight”) tweeted last week: “do we think bret easton ellis’ “millennial socialist” boyfriend is as breathtakingly stupid as him or just in it for the coke[?]” What is this “we” shit?

What is this paranoia about being on “the right side” and associating with people with “wrong” opinions? I’m not talking about racists, bigots, misogynists, or any other obvious villains. I’m talking about people that liked Green Book (pedestrian as it was, a fine movie), or those who agree with Ellis that while they despise the man and disagree with everything he stands for, they enjoy the spectacle of Donald J. Trump, President of the United States of America. The great benefit of the Trump era has been the complete dismantling (or disrobing) of the “Empire” that sold us on the Iraq War and Adderall for sixth graders. If Hillary Clinton had won, people wouldn’t be openly questioning reality, earnestly suggesting that we may be living in a computer simulation.

There’s only one answer to the question “Is Donald Trump racist?”—“Yes.” Prevaricating on this, whether it’s ignorance or a self-defeating reflex to be contrary no matter what, is stupid, and it validates some of the criticisms coming from people that haven’t read a word of any of Ellis’ novels. In the last essay, “These Days,” Ellis says he’s “well aware” he exists in “the bubble of white male privilege,” and instead of stopping there, he goes on: “Perhaps from certain angles this was true, but I didn’t consider any of whiteness or maleness defining aspects of my identity—or at least hadn’t been overly conscious of this (a fact, by the way, I can’t do anything about.” That’s the point! “White male privilege” is the luxury to exist without the burden of superficial characteristics defining you.

As funny and candid as Ellis can be, he’s frequently tone deaf and hopelessly out of touch, and he’s never more boring and pedantic than when talking about “Generation Wuss” or “social justice warriors” and the “snowflakes” on college campuses. From his bubble, he’s able to quibble over the aesthetics of Black Lives Matter: unfocused and unorganized (like Occupy Wall Street), and not a touch on the dramatically cool presentation of the Black Panthers. Living in Baltimore and seeing every day the effect that de facto segregation and systemic oppression has had on black people, dishing on the aesthetics of protesters and activists never crossed my mind, and to bring it up would be insensitive at best. But I can't say he's wrong—the Black Panthers were cooler.

Even if Ellis is out of touch in places, the larger point of White rings true and needs to be reiterated: artists have no obligation to be role models, and the idea that aesthetics are insignificant next to “correct” ideology in art is not only stupid, it’s borderline fascistic. If you hate Bret Easton Ellis, don’t read his books. Don’t waste time reading interviews with him, or screaming at him for waffling on Trump’s racism. He’s wrong, but White is just dispatches from a bitchy queen in Beverly Hills. So fucking what?