Nothing True Starts That Way: An Essay on Fiction

A response to Crispin Sartwell. 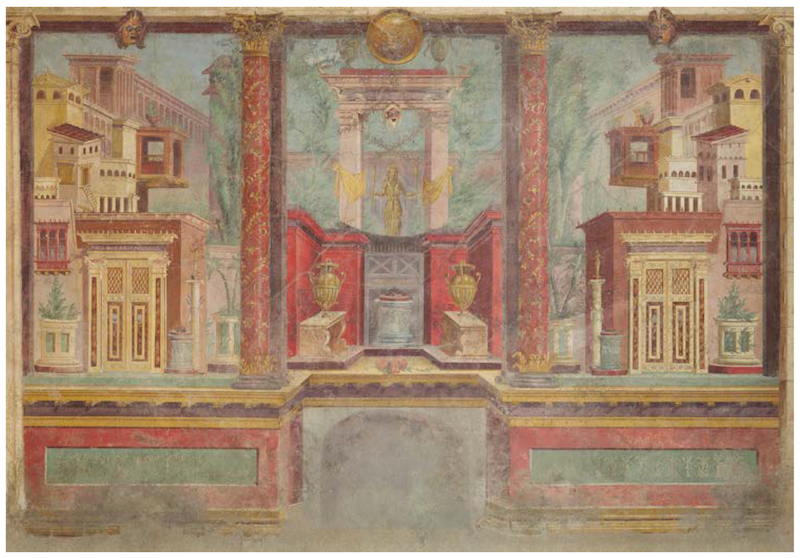 In “On the Fame of the Athenians,” Plutarch writes, “the deceived is wiser than one not deceived.” He’s referring, specifically, to the wisdom of those who are sensitive enough to be carried away by tragic fictions—for in Athens, “tragedy blossomed forth and won great acclaim, becoming a wondrous entertainment for the ears and eyes of the men of that age.” But he also calls that magnificence to account. “What profit, then, did these fine tragedies bring to Athens?” Plutarch asks. He compares playwrights, unfavorably, with those Athenian leaders who were known for shrewdness and diligence. These were the men who successfully defended Athens, securing its freedom. Plutarch hesitates, chary of dismissing tragedy too quickly. “If… the wisdom of Euripides, the eloquence of Sophocles, and the poetic magnificence of Aeschylus rid the city of any of its difficulties or gained for her any brilliant success, it is but right to compare their tragedies with trophies of victory.” But Greek tragedy never did play that kind of role in Greek politics. It was a failure, and an extravagance the city could hardly afford. It was only “a last oblation of their wasted livelihood, an empty memorial of their vanished estates.” “Such are the returns paid by the poetic art,” Plutarch concludes. “Nothing more splendid ever comes from it.”

Plutarch’s eloquence implies a different way of estimating what artists did for Athens, even if his political obsessions drive him to mock and disparage the city’s investment in their work. Tragedies interpreted the city to its citizenry; they permitted Athenians to reconcile their individual feelings and ideals with indifferent historical phenomena much vaster in scale. Like we do, now, Athenians identified with fictional characters who reflected their audiences in a wonderfully concentrated form. The crowds flocked to those stirring performances, more amenable to logic than a torrent of mere facts. It’s fair to say (2500 years after the death of Aeschylus) that without artists like him, all the facts we’ve gathered about ancient Greece would mean little or nothing to us. We only care about the “non-fictional” realities of life in that era because of its art and learning. If you doubt this, try naming 10 Visigoths, or a single Vandal.

The permanence of those Greek illusions led Soren Kierkegaard, the Danish philosopher, to use Plutarch as the epigraph for his treatise on marriage: because every marriage really has two different narratives that unfold in parallel: one is appearance, the other reality. From the perspective of the married couple, marriage is a commitment they preserve and defend. It’s an emotional bond that flourishes or ebbs according to obscure tides prone to frequent reversals. It’s a negotiation that other people, as third parties, find difficult to explain. Every marriage except your own seems to be founded on mild, fortunate, mutual delusions; considered objectively, it’s rare for a marriage to be worth all the pain and sacrifice it requires. Moreover, even if a particular marriage was to be had “at a good price”—because of the children born into it, because of a couple’s worldly success, or because both people were the "better" for it—what sensible observer, on those grounds alone, would rush to conclude that the marriage was a happy one?

In the sequel to his reflections on marriage, Kierkegaard reveals that his larger concern is religious. To him, marriage is an initiation into the kind of experience one needs in order to have piety and a mature view of life. Surprisingly, though, he doesn’t attribute this to the selflessness marriage requires or the security it provides. The sacred element in marriage is that which is outwardly invisible, because it is invisible, and subjective. The locus of a spiritual life is “the internal, in thoughts and dispositions that cannot be seen, not even with a night telescope,” he writes. Kierkegaard pursues the question still further, drawing an essential distinction between spiritual “thoughts and dispositions” and the external world:

Just imagine if the reverse was true, and life itself was compelled to meet our most childish demands, wearing all its colors on the outside. Each day would be delirious with spectacle and turmoil. Kierkegaard sets the scene well: “There must be great men, great subject matter, great events; [the scene] becomes comic if there are small folk or petty cash.” Even then, the endless parade would still cast a shadow. The gods, Kierkegaard writes, give a man “powers in the realm of actuality so that he is victor there, but then they give him an inwardness in which he himself goes astray. He is really capable of something great, but as soon as he has done it the event duplicates itself within him and he topples.” Unable to discern the principles he’s fighting to uphold, or the meaning of his acts, the hero comes at last to despair. His victories leave him with nothing, “neither joy, nor love, nor light,/Nor certitude, nor peace, nor help for pain,” as the poet says.

Ultimately, then, everything that happens to us makes the same demand: to be comprehended in full. But coming to terms with reality like this is no guarantee of success in life. As the Preacher writes, “In much wisdom is much grief; and he that increaseth knowledge increaseth sorrow.” Who can bear to count up the misery of other people? Who, because they’re unfailingly kind, gains the ability to fly, or learns the trick of plucking money out of thin air? What person, having heard Beethoven’s 9th Symphony, can suddenly loosen the knot of their sister’s madness, or their brother’s anger, without any assistance from the person thus afflicted.

When I read Splice Today contributor Crispin Sartwell mocking the beneficence of fiction, from the instant his column begins, I almost think he's lost his mind. Who told him that a good person comes equipped with superpowers? Does he imagine that the most heroic and compassionate Americans will get extra votes this November, to make sure we elect the right man? “If novels were going to save us they’d have done it by now,” Sartwell writes. He must not realize where salvation lies, or whom it visits, treading softly. “The ancient masters were profound and subtle,” Lao Tzu comments, in the Tao Te Ching. They were cautious, soft-spoken, "alert as a warrior in enemy territory... courteous as a guest.” And where did they hide, in so much ordinariness, the secret of their wisdom? “Look, and it can’t be seen... Reach, and it can’t be grasped,” Lao Tzu answers, unyielding as ever.

Sartwell is beset by what he calls the “meaningless pain” of a life “overly long.” On those grounds, I can forgive the way he shoots from the hip, often missing his targets by a wide margin. “I’ve heard novels credited with... the invention of the human,” he writes, drunk on sarcasm. I think he’s referring to Shakespeare: The Invention of the Human, which is a book by Harold Bloom about William Shakespeare, an Englishman who died several generations before the novel reached England. “It’s often said... that Goethe’s Sorrows of Werther [sic] induced a Europe-wide suicide fad,” Sartwell adds, “maybe not; it’s hard to tell.” Sure, it’s a bit hard to tell, but a little research goes a long way; in fact, Goethe’s novel did inspire some of his readers to stage their suicides as tributes to Werther. I’m as indifferent as he to any change in suicide rates that Goethe’s writing supposedly caused. The phenomenon is far too complex to be reduced to single variables. A different question occurs to me: without Goethe’s novel, would any of those suicides have mattered? I think not; never, in my career, have I ever heard anyone discussing all the European suicides that happened before The Sorrows of Young Werther. When young, hopeless people readied themselves for death with a conspicuous copy of Goethe, their deaths got a whole lot louder. That’s worth something, surely.

“Your amusements don’t turn have turn out [sic] to be the very meaning of life itself,” Sartwell mutters at us, a disappointed reader annoyed with women for thinking more of fiction and its applications than men (supposedly) do. Of course, he’ll allow that novelists sometimes pin the tail on the donkey by accident. Autobiographical fiction is partly non-fictional, for instance, which explains why about one-third of Philip Roth’s writing rings true. (But it doesn’t explain why a lot of the most persuasive, autobiographical stuff in Roth is completely bogus.) "Fiction gains whatever truth it provides by its similarity to reality,” Sartwell writes, parroting Restoration moralists. Then he reaches all the way back to Plato for the coup de grace: “Fiction, like the human imagination in its entirety, is parasitic on reality.” And, surely, every man may ask for the right to pick his own parasites, without other people interfering and exhorting him to improve his mind. “I really don’t care whether re-reading Ulysses will improve my brain function or empathy,” Sartwell declares. “I’m not just going to crack that sucker again.”

In the second chapter of that Joyce novel, a young tutor named Stephen Dedalus has a conversation with his supervisor, Mr. Deasy. “Do you know what is the pride of the English?” Deasy asks Stephen. He continues: “I paid my way. I never borrowed a shilling in my life. Can you feel that? I owe nothing. Can you?” I understand the pride Deasy’s referring to, because I’m so familiar with its opposite, like Stephen (who answers Deasy, “For the moment, no”). At moments like this, I think about a line from the Dhammapada, where the Buddha suddenly discloses that nirvana exists:

I have gone round in vain the cycles of many lives ever striving to find the builder of the house of life and death. How great is the sorrow of life that must die! But now I have seen thee, housebuilder.

I haven’t found the springs and workings of life, by myself, without owing anything. I’ve had the privilege of seeing what people alive long before me painted in their own blood. “A merchant is one who buys cheap and sells dear... is he not?” Stephen asks Deasy, after recovering from embarrassment. His point is that writers do everything backward, paying astronomical prices for the raw materials they need. They work with the regrets that repay them for their silent, introspective hours. They lose days, even weeks, to slippery questions of craft. They watch their books get buried by readers who misunderstand them. All of this goes into making something writers then sell, as cheaply as possible, for however long as our attention holds. No wonder we imagine art as a parasite, feeding off what's true—what’s really real—as if living ends at the threshold where art begins. But I was always slow to draw that line, personally. It has always seemed to me that art marked the place where a new and better life began, realer than the mistakes I’d made, more lasting than the losses I couldn’t avoid. “But now I have seen thee, housebuilder." And many times I’ve wished I could bring along anyone I liked, sharing every glorious feeling of certainty with them. But I traveled alone. I strained for peace, and it was gone. Nothing saves you for once and all. Nor can the doors that open onto salvation be counted. They are the glimpses of life, and death, and the house that is all the world. They undeceive us about ourselves, not as we’ve been, but as we could be—at the end of a story we hadn’t even noticed was being told, because it was merely felt, and nothing more. It’s still fiction, that part of ourselves. Because what we call fiction is reality’s waiting room.