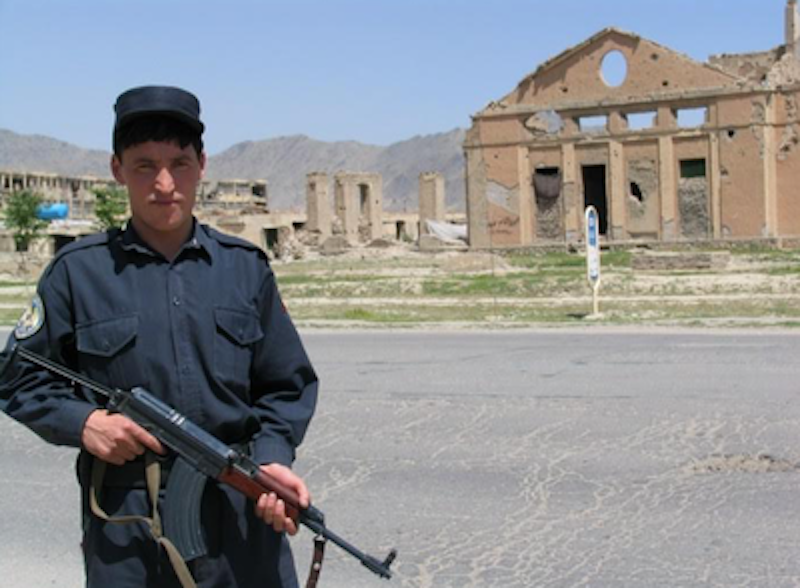 In 2004, I saw an online job ad for a manager of an educational TV station in Kabul, Afghanistan. On a lark, I sent in my resume since I’d been a manager at a PBS station for the past eight years.

Less than 24 hours later I had a long phone call with the man who’d placed the ad. Two days later I received a round-trip plane ticket from Charlotte, NC to Kabul (via JFK and Dubai), $1000 cash advance had been wired to my bank account, and I’d FedExed my passport to New York City to be stamped with a 30-day visa to Afghanistan. I bought an extra-large suitcase, the only three-piece suit I’d ever owned, a new Olympus digital camera, and an international health insurance policy with medevac.

My employer promised to meet me the next week at the Emirates airline JFK departure gate at 1:00 a.m. with my passport and visa, so I could get on the plane.   Test number one. Greatly relieved, a guy appeared, gave me my passport with the official stamps, and a new laptop. He said they were very difficult to buy in Afghanistan, and someone would pick it up at my guest house when I arrived.

The trip was 14 hours of darkness in a plane, surrounded by non-stop screaming babies held by women in black gowns and facemasks. The Middle Eastern man sitting next to me said they were “the Middle East’s revenge against 100 years of Western domination of their culture.”

Bombed-out Kabul. It was the first time I’d driven at night, during the “danger hours,” when westerners were warned to stay off the streets. Three Afghan colleagues from work had invited me for dinner in a place that secretly served wine and beer. The owners of the station demanded that I never leave the guest house without an armed guard, which seemed excessive to me, until tonight. There was no room in the car for my guard, but my co-workers said no worries.

We left in broad daylight while the streets were still crowded with cars, overloaded busses, and bicycles—sometimes with three passengers (one on the back, one on the handlebars, and one pedaling) and an occasional camel. We dodged huge potholes, drove way too fast, and drove on the sidewalk if traffic was sluggish. Pretty normal situation.

The pizza was okay, and the proprietor offered a bottle of French wine, which all my good Muslim colleagues said they’d love to enjoy with me. The bottle was warm and dusty, with no date, and the wine had turned to rancid vinegar. We were the only people in the restaurant. After the meal, it was pitch black when we left the restaurant. I’d never seen a city street so dark. I figured, go with the flow. What could go wrong?

Two weeks earlier, an Italian woman had been dragged from her car and kidnapped. It was 10 p.m., and the city that was packed in daylight was deathly quiet—no lights, shops closed, sidewalks deserted. Black shapes of buildings leaned over the street, making uneven cut outs in the bright blanket of stars above. Our beat-up Mazda was the only car on the broad boulevard. We jerked left and right to avoid potholes in the street, like a tilt-a-whirl at a county fair.

As we entered a roundabout lit by a rare acid-yellow light, one of Kabul’s mini-wind storms blew a thick cloud of dust and paper across the street. Dim figures emerged, just silhouettes at first. It was five guys, in police uniforms, AK-47 automatic rifles in hand, waving at us to stop. Anyone who’s been in a third world country knows this isn’t promising. It was a special concern in Afghanistan, because police uniforms can be bought in any bazaar for a few bucks—AKs too.

I looked over my shoulder from the front passenger seat at my friends in the rear, but they looked as scared as I felt. An armed guard, with his own AK-47, would usually be back there. The exact opposite of what I’d been told not to do every day since setting foot in Afghanistan—riding in a car, without a guard, late at night. As the driver eased to a stop, rolled down his window, and snapped on the interior light, I instinctively laid my hands flat and open on my lap.

A “policeman” stuck his head through the window. After long stares at the four of us, he asked for the driver’s permit. In my suit, I was obviously the only westerner. He motioned at me to open the glove box. Thankfully, nothing was inside—like a gun. He stepped back and waved us on. The driver floored it and the police disappeared in a swirl of yellow dust and crumpled papers. I swore to myself that I’d never do that again. But damned if I didn’t. It’s hard to avoid trouble in a war zone.