The Vanished Neon Billboards of Gowanus

What does that giant red "R" stand for? 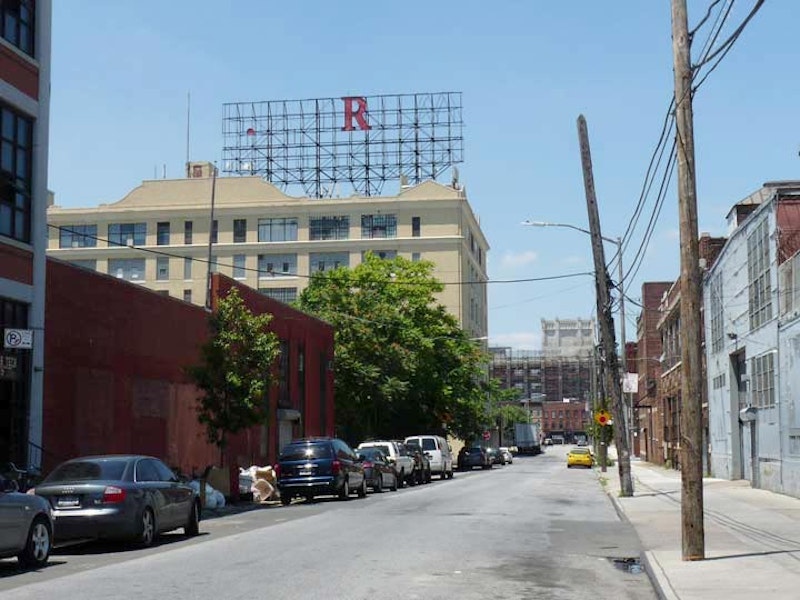 There’s a building in Red Hook with a gigantic neon billboard framework on it, and one “R” with a period next to it. What did the R stand for? What did it help to advertise? Why are the other letters missing? It’s among the “last Mohicans” of a group of huge neon billboard signs that sprung up in the year following both the construction of the 90-foot-high IND subway viaduct crossing the Gowanus Canal in the 1930s, and the equally high Brooklyn-Queens Expressway viaduct a decade later. Such signs advertised local wares to commuters using these sky bridges.

The Gowanus Canal section of Brooklyn is a fascinating neighborhood, caught between affluent Park Slope and Cobble Hill on one side, and tough-as-nails Red Hook on the other. For decades, the Gowanus Canal was a fetid waterway populated, according to rumor, by four-eyed fish and other biological undesirables. These days, the canal’s slowly being pumped clean, and the immediate neighborhood is has been noticed by developers, who’ve set about building high-rise apartments.

Take a ride on the F or G train as it makes the giant curve and climbs above the canal, and take a look out the window on either side. Advertisers considered both the IND subway and the Gowanus Expressway as prime territory to imprint their wares on commuters making their way into Manhattan from Bay Ridge, Flatbush, Gravesend and all points of Kings County.

Now, most of the businesses these neon giants beamed forth for miles around are gone. Like dinosaur bones, these signs were the only tangible reminder that they once existed. And in recent years, even the giants signs have disappeared.

When John Turano bought #80 Richards St. at Delevan in 1978, intending to make it a furniture manufacturer warehouse, the previous business to occupy the site was paper-goods manufacturer E.J. Trum, and Trum’s gigantic sign occupied the frame. When Turano attempted to pull down the letters to install his own sign, the “R” wouldn’t budge, and the lone “R” has been a part of Red Hook’s landscape for over 40 years. The first period is still in place. Today, 80 Richards is home to Idea Nuova Global, Inc., which develops, manufactures, and distributes home, room decor, and lifestyle products in the United States and internationally; the “R” remains in place. 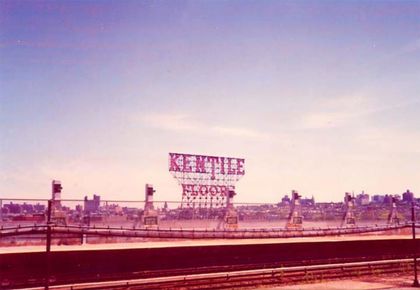 In 1999, waiting for a train at the Smith-9th Street elevated IND station, I snapped a photo of the massive Kentile Floors neon sign, built to attract business from the passing IND trains on the viaduct that loomed over 9th St. near the Gowanus Canal until February 2013.

Kentile was founded in 1898 by Arthur Kennedy, and went out of business in 1992. It opened a factory on 2nd Ave. in the Gowanus area in 1949—presumably when the neon sign was erected—which closed during the 1980s. Kentile sales fell sharply after new discoveries regarding asbestos, heavily used in Kentile flooring and other products, and the cancer asbestos produces, were brought to light.

When I last heard about the sign’s current whereabouts in 2017, a developer planned to spruce up a long-unused playground under the elevated tracks between 2nd and 3rd Aves. and 9th and 10th Sts., splitting up the letters in “KENTILE,” mounting them separately on 10-foot tall planters. This would be disastrous. Mount the sign intact, or don’t bother. So far the sign remains in storage, awaiting whatever fate’s in store for it. 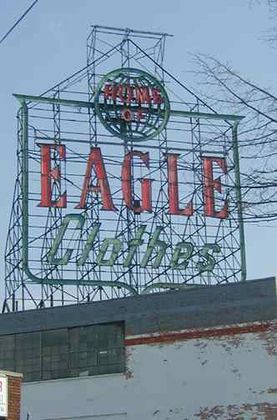 Eagle Clothes was one of the many haberdasheries that succumbed to more casual living during the 1960s. As more men began to eschew suits, jackets and ties during all but strict business hours, clothing manufacturers had to adapt or die. One by one, Weber & Heilbroner, Rogers Peet, Robert Hall all folded. Many of their ads can still be found too, on buildings in and surrounding Manhattan’s Garment District. The biggest remnant of the era when all men wore hats was here by the Gowanus Canal, at 3rd Ave. and 6th St.

Casual dress for work became the norm in the late-1990s with the rise of tech dot.com companies, but since those have collapsed and there’s more of an emphasis on traditional business, maybe there will again be a need for companies like Eagle Clothes as people wear suits to work again. But maybe not. With the COVID-19 crisis, the practice of commuting to a downtown office building to work may soon be outdated.

In 2013, U-Haul, the truck rental company, owned the building and planned to build a couple of stories on the existing building, necessitating the dismantling of the sign. U-Haul said it planned to reinstall parts of the sign when the work was completed. In 2019, however, a six-story residential building had risen on the site. 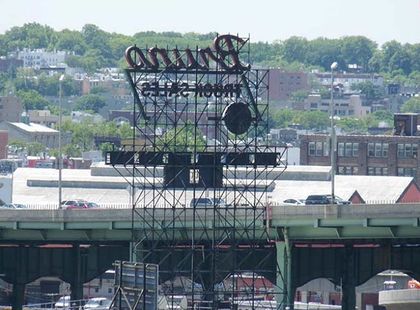 I’m unsure if Bruno Truck Sales is still in business; its location is given as 435 Hamilton Ave. (at 2nd Ave.) an address that doesn’t apparently exist. The sign, seen here from the elevated Smith-9th St. platform, is mounted on 465 Hamilton that is currently a Department of Sanitation facility. It remains the lone intact survivor of the golden age of Gowanus neon billboards.