Nimona Won't Be Contained in Your Female Hero Tropes

Shape-shifters are hard to pin down. 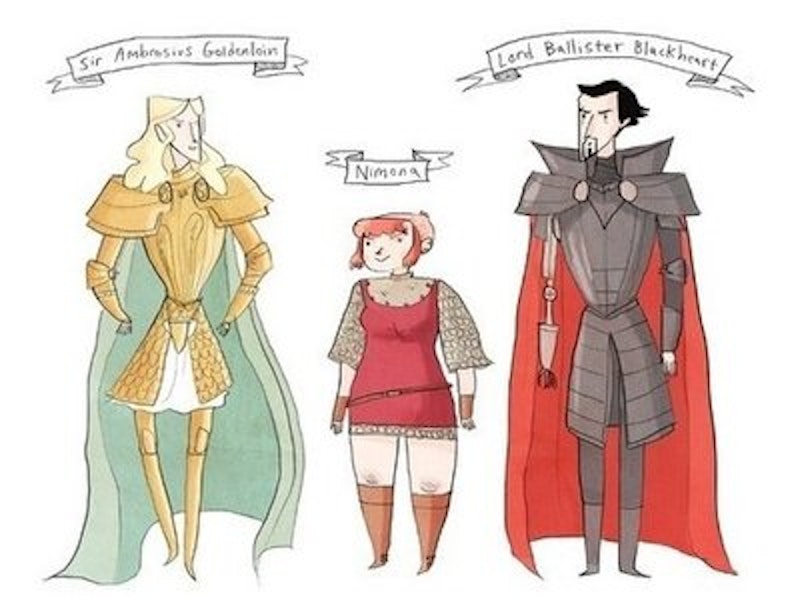 "Can I at least kill Sir Goldenloin?" the titular character pleads early on in Noelle Stevenson's 2015 YA graphic novel Nimona. The bloodthirsty anti-hero is a familiar figure in comics—like Wolverine or the Punisher or the gleefully snickering Deadshot. Mostly, though, the people who revel in violence, whether for excitement or for laughs, are men. Nimona's a tween girl.

The way in which Nimona plays against gender stereotypes is part of the comic’ joy. Nimona is a mash-up of fantasy, sci-fi, and superhero genres; it's set in a medievalish kingdom with advanced technology and a supervillain with a mechanical arm, Lord Blackheart. Nimona loves villainy and destruction, so she decides to be Blackheart's sidekick, much to his consternation. She plays the eager, mischievous, murderous crowd-pleaser, while the evil Blackheart acts as the nervous mother hen, worrying about Nimona's safety and begging her not to decapitate all those soldiers over there, oh no, stop, [insert rending sound effect].

Usually, even when women are violent and powerful in fiction, they're supposed to be unhappy or ambivalent about it. Bella in Twilight has to resist her murderous impulses when she finally turns into a super-powered vampire. Katniss in Hunger Games is traumatized by her own violence. Phoenix in X-Men accidentally commits genocide (you never see Superman accidentally committing genocide.) Even Buffy is burdened by her superpowers, which prevent her from living a normal teen life, because normal teen life is supposedly something to wish for. For Nimona, though, bathing in the blood of your enemies and hearing the lamentations of their compatriots is good clean fun. She sows mayhem and destruction.

Nimona's ability is, specifically, shape-shifting—she can change her form to mimic different animals and people. How she got this ability is ambiguous; a few origin stories are put forward, but it's not clear whether they're accurate, speculative, or merely Nimona making things up. But it's clear that for Stevenson as a comics creator, the advantage of shape-shifting as a superpower is that it's so visually exuberant. Stevenson's fluidly blocky children's book style works perfectly in delineating Nimona's dizzying changes, from adorable pink cat to adorable bunny to fox to triceratops to adorable (albeit impressively menacing) dragon.

It's not just Nimona who gets to enjoy her powers; it's the artist and the readers. Nimona bursts out of the stereotypical roles for women. She can turn into anything, and be anything. Even in her natural form (if it is her natural form) she won't be bound by the usual leading lady tropes—Stevenson draws her with proportions that are closer to average American woman than to the usual comic book default of model-thin with gigantic breasts.

Nimona's powers, not so coincidentally, parallel those of another non-normative female hero—G. Willow Wilson and Adrian Alphona's Kamala Khan, aka Ms. Marvel. Kamala doesn't turn into animals and fantasy monsters; her shape-shifting is more of the body-made-out-of-silly-putty variety. Still, shape-shifting for her, as for Nimona, works as a metaphor for a woman hero who won't be frozen into the usual roles for women. Kamala initially uses her powers to turn herself into a leggy blonde in line with the glam superhero default. She quickly abandons that for her more comfortable Pakistani, brown, brunette, short original form.

Female characters are often defined by their bodies and images. Their souls, personalities and heroism are seen as secondary to their appearance and gender.  Emma Frost is more known for her (mostly male-drawn) va-va-voom proportions and wardrobe choices than for her powers.

But when you're a shape-shifter, your body isn't you. Is Nimona the girl? The cat? The dragon? She's all of those, which means none of them is her. The real Nimona, mischievous bloodlust and all, is somewhere else, in some form outside of form that can be suggested, but never drawn, or gazed at. Nimona changes shape because to change shape is one way to be true to yourself.