Weaving and winding through the city on the PATH. 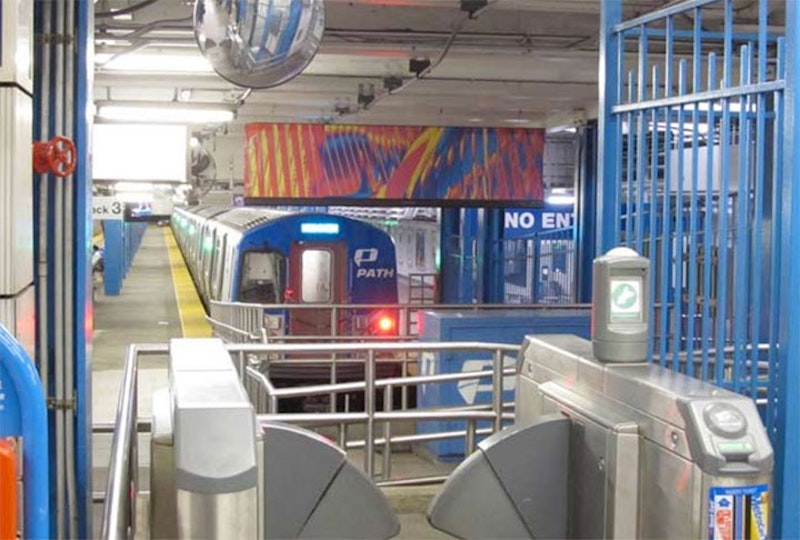 The Port Authority Trans-Hudson Railroad, or the PATH train, is NYC’s “other” subway, running under 6th Ave., Christopher St., Greenwich St. and Morton St. and from Church St. on the once and future World Trade Center site to various stops in Hoboken, Jersey City, and Newark. At its full length, it runs from one block away from NYC’s Pennsylvania Station to Newark’s Penn Station.

The PATH is the modern-day result of the first attempt to cross the Hudson by placing railroad tracks in a tunnel. Engineer Dewitt Clinton Haskins drove a partial tunnel from the Jersey side beginning as early as 1874 but got only partway before an accident claimed 20 lives. A British firm took up the mantle in 1890, but again was forced to abandon the pursuit.

An ambitious lawyer from Georgia via Tennessee, William Gibbs McAdoo, obtained backing and employed upgraded tunneling methods in 1901, proceeding to do what by then was considered impossible: he engineered multiple tunnels and inaugurated rail service, the first trans-Hudson rail of its kind, between NYC and Hoboken, from 1908-1910 and Jersey City and Newark Park Place in 1911. Newark Penn Station service was added to what was called the Hudson and Manhattan Railroad in 1937. Original service ran between Hoboken and 19th St. (now closed to the general public) and opened February 25, 1908. The H&M was, in effect, the original 6th Avenue Subway—Independent Subway 6th Avenue service did not open until December 15, 1940.

William Gibbs McAdoo (1863-1941), the son-in-law of U.S. President Woodrow Wilson, acted as Wilson’s Treasury Secretary from 1913 until 1919, raising millions for the US effort in WWI. He unsuccessfully ran twice for the Democratic presidential nomination in 1920 and 1924, and was later elected a US Senator from California in 1933, serving one six-year term.

I haven’t used PATH much over the years. Despite a connection with the 14th, 23rd and 33rd St. stations on 6th Ave., the subway and PATH are separate entities and no transfers are allowed, though PATH did begin using Metrocards a few years ago. I rode it more in the 1980s and 1990s when my journeys to Hoboken were more frequent—I saw a number of shows at a venue called Maxwells, which closed a few years ago, and obtained tickets at a record store on 1st St. called Pier Platters, which closed more than a few years ago.

I should ride more often. The PATH has its quirks. There’s a distinctive, musty aroma. Despite a lot of modernization over the years, most stations do contain some elements of original “19-oughts” construction. Until recently the rolling stock was, in many cases, 1965 vintage. Here, I’ll concentrate on the PATH in NYC, where it has six stations. I found some interesting interactions and leftovers from a previous age.

The 33rd St. station is entered (mostly) through the basement of the Manhattan Mall, the former Gimbels on 6th Ave. between W. 32nd and 33rd Sts. Like the MTA’s W. 4th St. station, there are no longer any exits on 33rd St. proper, as this is the second terminal on the site. While the original opened in November 1910, a new 33rd St. station had to be constructed from 1937-1939 to make way for the Independent Subway complex, which provides connections to the BMT, PATH, and IND lines.

On weekdays there are separate routes from here for Hoboken and Jersey City service, which are combined into one route for the overnights and weekends. Transfers may be made at Grove St. in JC for Newark-bound service, which originates at the World Trade Center site. 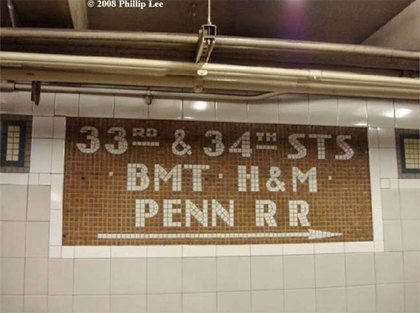 Original tiled IND subway sign in the IND 34th St. station pointing to the PATH terminal. When the IND 6th Avenue Line opened in 1940, PATH was still known as the Hudson & Manhattan, and several directional signs still point riders to the “H&M.” Also at this time, the passageway to Penn Station was still open, and riders didn’t have to brave the rain, cold or heat to walk a block outside to get there. 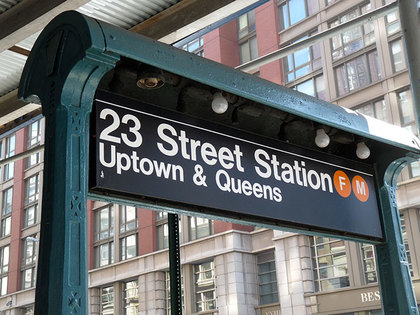 The entrances to the 23rd St. station on the west side of 6th Ave. are your typical IND entrances with a crosshatching design except that there’s a “hood” stanchion, its underside lit by incandescent bulbs. 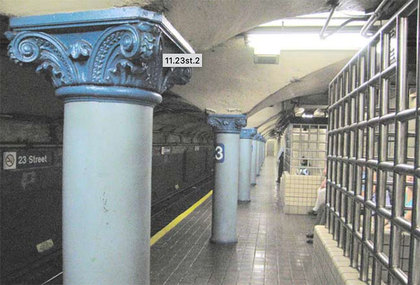 The 23rd St. station platforms have retained some original Beaux-Arts construction dating to the station’s opening, June 23, 1908. It’s reminiscent of the original Heins and Lafarge stations of the 1904 IRT (running on the #6 line from Brooklyn Bridge north). The vaulted ogee curves are H&M trademarks and appear in many of the stations both in Manhattan and New Jersey. 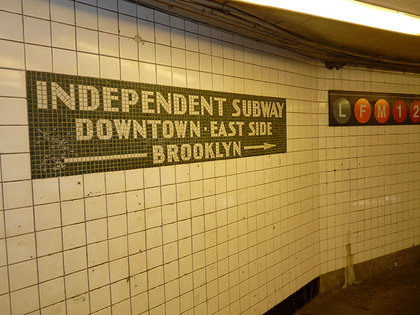 Where 23rd St. was fairly devoid of old IND/H&M signage, the 14th St. station is a virtual sign museum. This is a surprisingly busy subway interchange, since the station also connects with the 7th Ave. IRT #1, 2, 3 lines via a pedestrian tunnel, and there’s also a subway (though not PATH) transfer to the crosstown BMT L line. Hence, IRT, IND, BMT, PATH all interact here.

1940-vintage tiled sign. There’s a very “serious” look about the lettering of IND-era signs. Compared to Helvetica, which originated in Switzerland in 195—the letters just look “friendlier” or more colloquial. The Helvetica signs want to be your pal. 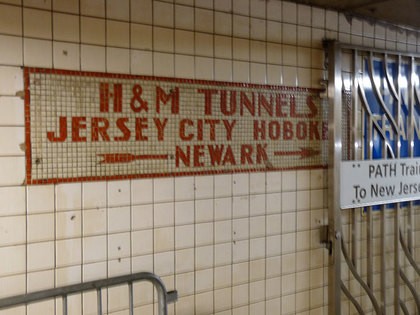 The Independent Subway (IND) included directional signs to the H&M (Hudson & Manhattan) tunnels. Newark service began in 1937, and these signs were unveiled in 1940. Again, the type is all business, no nonsense here. On the right is a newer PATH system sign, this time not in the usual Helvetica, but in Frutiger, a font that first appeared in Charles deGaulle Airport in Paris in 1968. 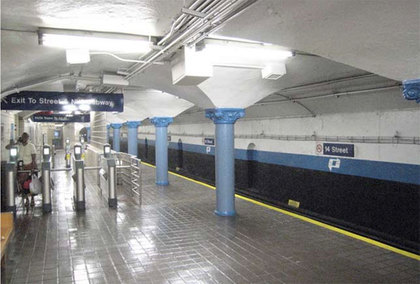 PATH turnstiles are a little different from the MTA—whereas the MTA uses a swipe system, which even the most seasoned rider sometimes messes up, at PATH you insert the card in one slot on the bottom, it registers the fare and pops out a different slot on top. A tap system is currently well underway. Instead of concrete surfacing, PATH stations use a matted surface. 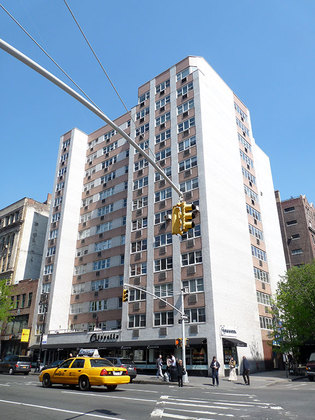 The big white high-rise at the NE corner of 6th and W. 9th contains the rather inconspicuous PATH entrance. 69 W. 9th was built in 1956. A selection of colorful murals can be seen at the entrance. 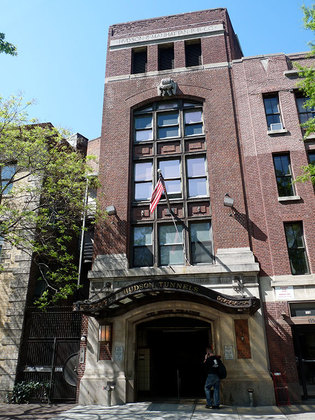 The Christopher Street PATH entrance, #137 between Hudson and Greenwich, is its own freestanding building, constructed in 1912, with a chiseled “Hvdson & Manhattan R.R. Co.” sign at the roofline and a restored iron and glass marquee in front.