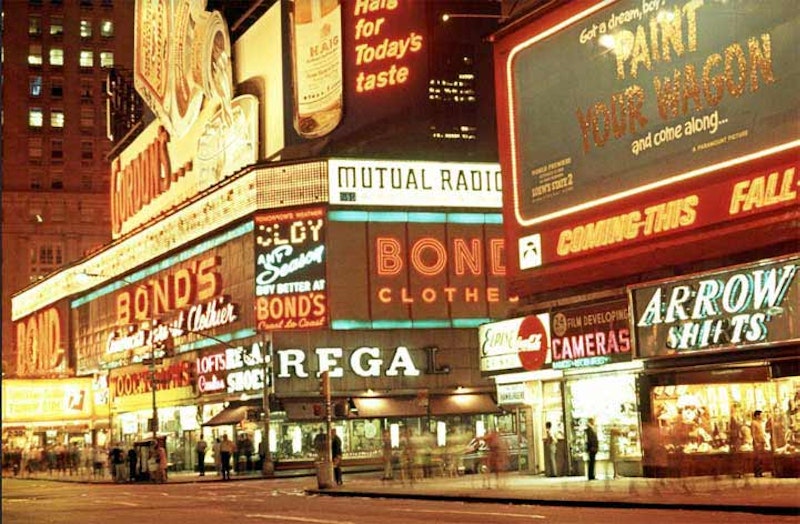 I stumbled across some photos online that were taken in NYC in 1971 by a visiting photographer from Germany, Hans Joachim Jacobi, using an Exakta Varex IIa, an East-German camera. He was visiting Halifax, NS to visit relatives, and stopped off in NYC for a few days. Nineteen Seventy-One is a distant time. It’s the year I graduated grade school, St. Anselm in Brooklyn. The Pittsburgh Pirates beat the Baltimore Orioles, who were in the World Series for the third straight year. Richard Nixon was preparing to run for a second term. John Lindsay was in his second term as NYC mayor. Audiences were chortling to the wit and wisdom of Archie Bunker, as All in the Family grabbed the top TV ratings spot in 1971-1972, an era when My Three Sons and The Brady Bunch were going strong. The top grossing movies? A Clockwork Orange and Willy Wonka & The Chocolate Factory.

Willard, in which a maniac controls an army of rats to do his bidding and kill his enemies, was tearing up box office lists. In 1971 it was playing in the Criterion Theatre, which had opened back in 1936 at 1514 Broadway between W. 44th and 45th St.. Beginning in 1956, the Criterion hosted the world premieres of the Ten Commandments, South Pacific, and My Fair Lady, and the USA debut of Lawrence of Arabia. The Criterion became a multiplex in 1980 and closed in 2000.

Charles Anson Bond founded a haberdashery in Cleveland in 1914, and 10 years later operated 28 stores around the country. Though its NYC flagship was at 5th Ave. and 35th St., by 1940 it had a block-long space in Times Square on Broadway between W. 44th and 45th, featuring enormous sculptures and neon signs on its exterior. Bond closed its Times Square store in 1977 and the space became Bonds International Casino for a few years after that. In May and June 1981, The Clash played 17 dates at Bonds. I attended one great show. 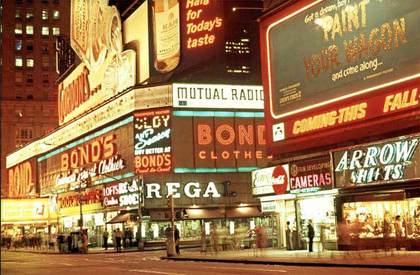 A view of Bond’s from W. 44th. Plenty of well-known brand names rented space on the ground floor including F.W. Woolworth; Loft’s Candies, a 1960s NYC staple since the 1920s—it later merged with Barricini and closed its NYC outlets by 1994; Regal Shoes, once ubiquitous but since disappeared.

On the corner is the Elpine Drinks stand, where the fruit juice came in cone-shaped cups in metal holders. In 1957, Tony Curtis plotted his next scheme as press agent Sidney Falco in Sweet Smell of Success there. Finally, Arrow Shirts, a brand of Cluett-Peabody, which manufactured shirts and shirt collars (before the 1920s, shirts and collars were separate) in Troy, New York. My mother and grandmother worked in the Cluett-Peabody offices in the 1940s and 1950s. Phillips-Van Heusen acquired the company in 2004. Gordon’s Gin had an enormous ad on the Bond’s roof. The company was founded by Scot-Britisher Alexander Gordon in 1769, and the brand is going strong today. Mutual Radio was part of the Mutual Broadcasting System, a commercial radio network in business from 1934 to 1999. 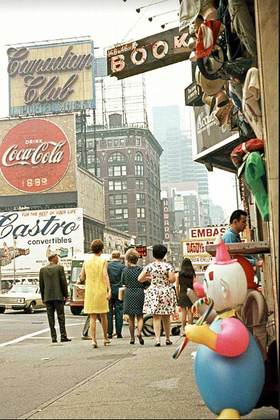 I think we’re looking north on 7th Ave. between W. 46th and 47th here. Castro Convertible, which had the most memorable radio jingle in history, Coca-Cola and Canadian Club Whisk(e)y, founded by Hiram Walker in Detroit in 1858 but produced for most of its history north of the border, were Times Square neon staples for decades. In the right foreground is the old Embassy Theater, a French salon-styled 556-seat one-screener, opened in 1925 by Loew’s. In 1929 it made the unusual move of showing nothing but newsreels which made it the CNN of its era. Its interior has been designated by the Landmarks Preservation Commission, which has saved it from being altered even after the theater closed in 1997 and it served as the Times Square Visitors Center from 1998-2014. Among the current tenants is Actors’ Equity, a labor union hall where actors audition for Broadway theater productions.

Just behind the Embassy you can make out the Palace Theater marquee. The Palace, which is still in business at 1564 Broadway at W. 47th, was founded as a vaudeville theater in 1913 by Martin Beck and was once the most desired booking in the country for vaudeville artists. Even after movies entered the bill in 1929, it remained a premier vaudeville theater with Jerry Lewis, Frank Sinatra and Danny Kaye hitting the boards at various times over the years. Among its movie premieres was Orson Welles’ Citizen Kane in 1941. In recent years, it continues as one of the few “Broadway theaters” that’s actually on Broadway. Just about everything else in the picture has disappeared or has been altered beyond recognition. The women’s outfits here are typical for 1970-1971 and about match what my mother was wearing at the time. A billboard for Howard Clothes can be seen further up 7th Ave. 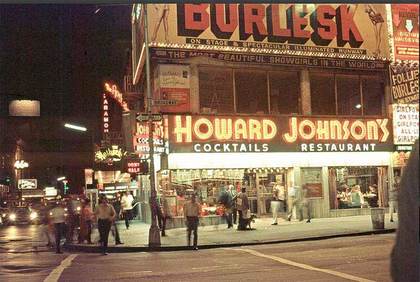 One of the last Howard Johnson’s restaurants held down the NW corner of Broadway and W. 46th Streets for four or five decades until it succumbed in 2005. The last remaining Howard Johnson’s is in Lake Placid, NY. Above the old HoJo’s were the remains of the old Orpheum Dance Palace (originally Wilson’s Dancing Academy), which entertained customers with “10¢ a dance” more-time-more-money taxi dance partners from 1917 to 1964. Here Henry Miller met June Smith, inspiring him to write Tropic of Capricorn. In the 1970s and 1980s the Orpheum’s third floor was taken over by the New Paris Theatre. At length the New Paris closed and the legit whodunit Perfect Crime moved in. But the old Orpheum wasn’t completely de-sleazed, since a string of strip clubs and porn palaces, the last of which was the Gaiety male strip club, occupied the second floor till the very end. The space is now occupied by retail with huge illuminated billboards. 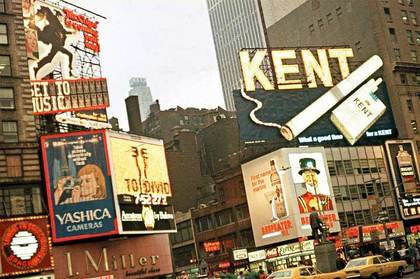 The I. Miller Building, at Times Square and W. 46th St., was built from 1927-1929 and is nearly unrecognizable these days underneath the video billboards and garish scaffolding advertising a chain restaurant. Israel Miller’s shoe store was long patronized by theater people. But a closer view of the I. Miller Building along W. 46th St. is a glimpse into the past. In 1927 the I. Miller company took a public vote to determine the most popular theater actresses of the day with the idea of placing their statues on their new 7th Ave. store. The results came in and sculptor Alexander Stirling Calder was chosen to depict them in some of their most famous roles. Ethel Barrymore as Hamlet’s Ophelia, singer-dancer Marilyn Miller as Sunny, Mary Pickford as Little Lord Fauntleroy, and soprano Rosa Ponselle as Bellini’s Norma. These works can still be seen around the corner on 46th and they’ve been restored in recent years. At the top is a billboard for the 1969 film revival of Goodbye Mr. Chips, the classic about a beloved British educator and his wife, with Peter O’Toole and Petula Clark.

Times Square, until the 1980s, was a bastion of cigarette and tobacco ads. Camel ads were engineered to issue “smoke rings” made of steam. My mother was not a heavy smoker, but Kent was her brand. The Yeoman Warders, affectionately called Beefeaters, are ceremonial guards at The Tower of London founded in 1485 as actual guards, and continue to wear the Tudor-style uniforms of the period. Londoner James Burrough founded the gin brand in 1863. Once again, Elpine Drinks holds down the SE corner. Ads for Yashica cameras and Accutron watches can be found at the I. Miller building.