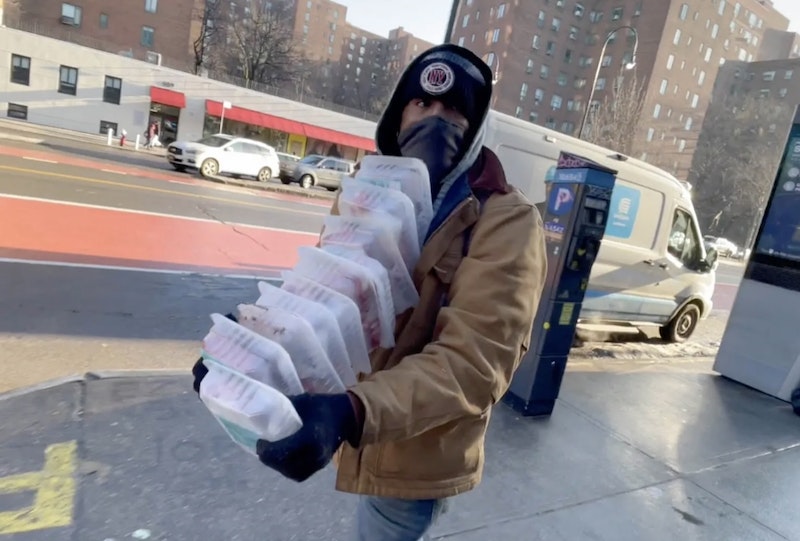 A recent photo of a shoplifter carrying 10 steaks out of a New York City Trader Joe's (NY Post headline: "Where's the beef") went viral on social media, raising eyebrows across the nation. The store's employees intercepted him, but just to grab the shopping basket; they let him have the steaks. "Leave the steaks, keep the basket." This is real-life satire. The thief knew what would transpire, given the brazen nature of his crime.

On the same topic, I recently saw a guy trying to walk out of a Publix with a pack of chicken that he didn't bother trying to hide. A young lady who was stationed at the door took it from him, and then he just walked out. I don't recall seeing such a thing in a lifetime of grocery shopping, which tells me, all things considered, that we're entering the heyday of shoplifting. Case in point: Trader Joe's could easily hire a security person to stand by the exit, but it chooses not to. It's an invitation to steal.

The Trader Joe steak bandit told a NY Post photographer who was at the scene (waiting for such an event?) that he was homeless and hungry, and was going to eat the steaks, but where was he going to cook them? Steak tartare, maybe. More likely, he was planning on selling them to a sketchy bodega. Had the thief been planning to eat his loot, he'd have stolen cheese, or cold cuts and bread.

But was this considered a crime on the progressive side, or is it just technically a crime that should go unpunished? To ESPN host Al Sharpton, it's a crime which deserves punishment. "You go into a local pharmacy," he complained, "a Duane Reade or Rite Aid, you got to get some help to assist you. They have the little button, they get the buzzer and the guy comes over and unlocks your toothpaste. I mean we are talking about basic stuff here." Toothpaste is the new condom in NYC drugstores. Hand soap may be next.

Sharpton’s realistic enough to admit that this will take his city to a dark place, which current NYC violent crime stats also suggest. Not so for Nikole Hannah-Jones, the ivory-tower intellectual responsible for the New York Times' "1619 Project," a revisionist approach to history that a number of prominent historians have debunked. Hannah-Jones chastised the aging race-hustler for his harsh comments. "This drumbeat for continued mass incarceration is really horrific to watch," she said, adding that Sharpton was now backing the carceral state. When a black progressive like Sharpton isn't progressive enough for another black progressive, we live in strange times.

Hannah-Jones also said that a person stealing steaks is not national news, sounding like she's stuck in the 1970s when it comes to how the media now operates and how information gets spread on social media. A spectacular photo like this one will always go viral. When store employees are worried about shopping baskets, but not a couple hundred dollars’ worth of steaks, and there's a photo or video, that's national news, regardless of what the New York Times thinks.

I guarantee that Hannah-Jones had no problem when the Central Park "Karen" story (another "local" NYC story) went national, despite the fact that the woman wasn't allowed to present her side of the story, which involved a veiled threat to her dog. "Karen" was immediately fired, and ended up fleeing the country. That's the appropriate, "just" punishment, from the current left-wing point of view.

The way it works is that photos of emboldened shoplifters will be publicized, which encourages more thievery. As for the "carceral state" comment, Hannah-Jones is either confused (or disingenuous) if she thinks enforcing shoplifting laws is a major contributor to that unfortunate situation.

Criminalization of drug use, coupled with draconian sentences for crack possession in the 90s—a policy backed by Joe Biden—is what's behind the carceral state, which could be ended tomorrow simply by releasing all drug offenders. Other major contributors: militaristic policing tactics, racial profiling, and prison privatization. Victims of the carceral state are those serving long prison terms (many of their sentences were mandatory, giving judges no leeway for mercy) for victimless crimes. Shoplifting isn’t a victimless crime, although Hanna-Jones would demur. Progressives of her ilk don't think crimes against property or businesses are significant, as we learned during the George Floyd protests. Burning down a building or robbing a store blind is no big deal.

If you think saying robbing a store blind is an overstatement, think again. A Manhattan Rite Aid—Hell's Kitchen—that’s been a heavy shoplifting target, has just shut its doors. The store lost more than $200,000 in merchandise to thieves in December and January alone. They come in with laundry bags to fill up, sometimes twice a day. Another Rite Aid on Manhattan’s Upper East Side that's been plagued by shoplifters is slated to close on Feb. 15.

This is the world that Nikole Hannah-Jones wants. A world in which "well-intentioned" rhetoric from activists trumps the everyday reality society must cope with. When crucial stores outside of Hell's Kitchen and the Upper East Side start going out of business—those in marginalized areas already underserved by grocery stores—let's see how much empathy she'll have for the affected residents. But she'll blame it on the businesses, unaware that they can't make it losing $100,000 per month to crime. Maybe capitalism's bad, but who's going to provide those people with their prescription drugs when these stores close?

Let's also see where the soft-on-crime approach gets the Democrats. History's made it clear that the GOP always feasts on crime spikes under Democratic stewardship. Get ready for the bloodbath in November.