One bird against explosives and “seasonal grooming.” 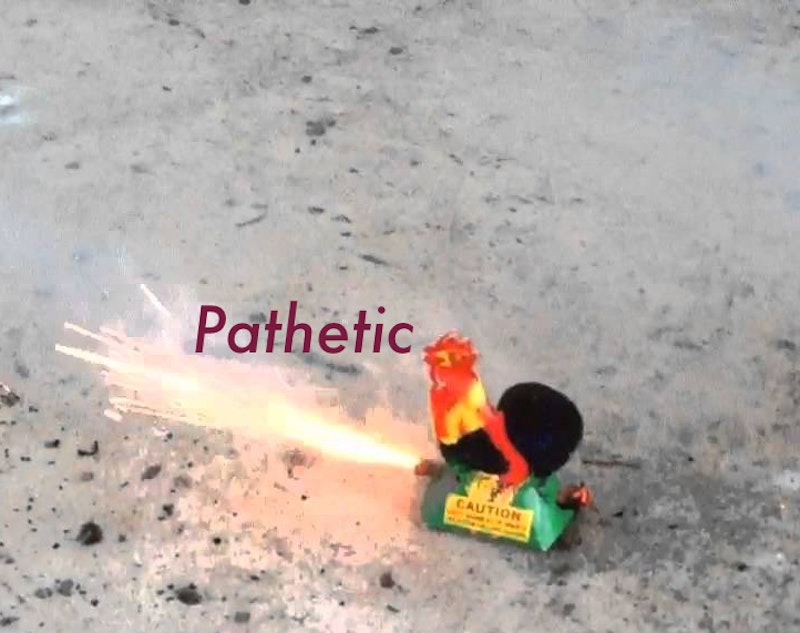 I hate this time of year. The noise, the humidity, my hackle (it swells). Nothing is more debasing for a rooster than getting a “summer shave,” something that became popular in the 1980s and hasn’t left the yards since. Disgusting—you look like a cutlet. Don’t give them any more ideas. They already love beheading and buttering and battering us—the un-feathered rooster is no nobler than a barn worm or a virus. At least viruses are always making moves. You? Canopy. Recliner. Coconut shell mixed drink, “fun straw.” Never done cocaine and never will. You drink, you marry the wrong chick, you die unhappy and unfulfilled. I can see it in your headband. You might not last the summer. Showing your skin, shedding your feathers. No shame whatsoever. Unbecoming doesn’t begin to describe their condition.

Shame is important. Shame is closely related to rage, which fuels most activity on earth. “Passion” is just rage sublimated and defanged. I have rage, so does my family. My cousin Bennington is an especially vengeful individual. We all have trauma from the people we’ve encountered and gotten stuck with in life that act on their raw rage instead of redirecting or suppressing it like a normal person. I’ll give you an example: I was out in the yard. The cows were being milked, and product was being collected. A mutually beneficial situation. Those fucking cows were up all night screaming hysterically, unable to evacuate on their own. Pathetic. So the Bishop’s son went out, and though he couldn’t hear them curse his name, I grieved for the poor boy, without a father or mother anymore, barely able to keep the place open. They called the boy all kinds of names—bulldyke, battleaxe, twizzler dick—but I want you to know that this young man’s name is Beauregard, and I have my own issues with him.

I keep his youth in mind, but the boy loves fireworks. Not seasonally—Beauregard is a pyromaniac. Bottle rockets, roman candles, Paris pirouettes—he “fired” the horses on our land and filled their stable with explosives. This is not an isolated incident. I hate this time of year because all of neighbors start lighting things on fire, and those things go into peoples’ windows and homes and then they die, or they’re burned, disfigured, traumatized for life. Par for the course on Independence Day. I was talking to Bennington a few weeks ago on a plane back from Kabul and he told me he has no sympathy for veterans that put signs up on their lawns asking their neighbors to refrain from using fireworks. It affects their PTSD. “They signed up for war, they got it. What do they expect? Thank you for your service and all that, but ugh, dramatic much?” He doesn’t get it, or much else. I’m not complaining. I haven’t been to war recently, not since the invention of gunpowder. But I don’t want my fucking house catching on fire. Barns are known to be very wide and—I’ll say it—considered expendable, by most humans. “A barn burned down.” Pity the farmer. Pity the “poultry.” Sorry for the profanity, but the point remains.