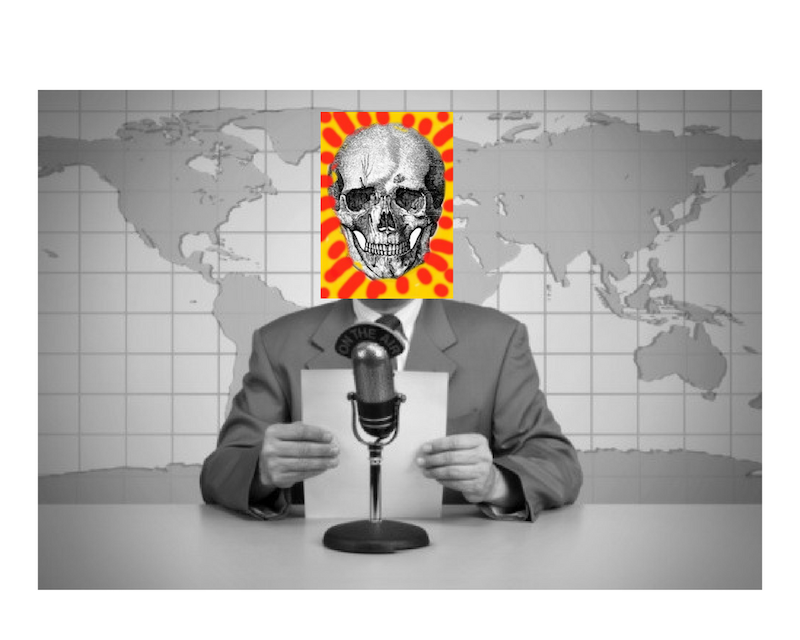 Early this morning Lady Liberty was found floating face down near the shore of the East River in New York City. A suicide note was found written on her Independence Day tablet, along with her torch floating nearby. The note read, “I am sick and tired of the huddled masses who gawk at me daily with dead blinking eyes, I feel so violated.” Miss Liberty was 131 years old and has no surviving family members. In an unrelated story the zombie Apocalypse is growing steadily across the nation, gaining new members by the thousands. A spokesperson for the zombies could not be reached for comment. In a late-breaking story, President Trump, along with some politicians, young interns, and diplomats were arrested last night at the White House during a police raid. A drug-fueled sex orgy involving animals, Mormons, a massive pie fight and sporadic cell phone tweeting activity revealed a child pornography ring controlled by Hollywood moguls, the Pope, lizard people and the legendary little green men from Mars. Press secretary Sean Spicer was found passed out in a closet wearing a bunny rabbit costume. He’d been repeatedly raped and beaten. He was heard saying repeatedly, “I just wanted to be loved.” And don’t we all really want that too?

In Baltimore today, the Washington Monument collapsed into a giant sinkhole causing major traffic delays. No one was injured but the Mount Vernon neighborhood is gone. The Mayor proclaimed, “This is a sad day for our city, we plan to rebuild and create jobs for our citizens.” Meanwhile, the new city transit system is in shambles as multiple bus collisions are occurring because the bus drivers have no idea where they’re supposed to go. Crime is at an all-time low and the murder rate has gone down to zero. The Baltimore Sun, whose motto “Light For All” is going lights out after 180 years of reporting the news. A recent acquisition of the free weekly City Paper was not enough to keep the sputtering newspaper afloat. Plans to publish a full color advertising throwaway circular are in the works.

In a story of death imitating art, acclaimed surrealist painter and infamous art icon Salvador Dali is being exhumed in a paternity lawsuit. When they dug up Dali he was eating lobster and sipping champagne. He was quoted as screaming, “Zoot Allures, I am drugs, you are all my children!” There is no truth to the rumor that Alice Cooper is Dali’s bastard son.

In national news, snakebites are on the rise in the United States, prompting a surge in the sale of whiskey. Germany legalizes same-sex marriage and bans gays. China strongly protests US arms sale to Taiwan, stating they make shoddy weapons cheaper. Many return to their homes as wildfires sweep west, but holiday cookouts and fireworks continue. Flat-earth believers now say the earth is shaped like a donut. The hole in the middle is a mystery but Christians say it’s there for God to hold and dunk in his coffee. Heroin is now the latest craze. Manufacturers are putting opiates in everything from candy and cigarettes to wine, beer, and soda pop. Experts believe it should alleviate the latest nationwide epidemic.

Today in sports, various teams played games involving balls. Some teams won while others lost. All the players were obscenely overpaid. In state news, it’s been revealed that government bureaucrats are grossly incompetent paper-pushing time-wasters who pass the buck down the line. And customer service as we knew it is obsolete. From now on you must search for your products, scan and bag your purchases and then say thank you to the former cashier who cannot tell you where anything is. In banking news, all your money is gone and has been replaced with shiny glass beads and seashells. Congressional leaders informed Americans that if they’re healthy they don’t need healthcare. This was a big relief for many Americans.

In entertainment news a developing story out of Hollywood. Two thousand homeless people share nine bathrooms on the set of America’s Got Talent. The lines wrap around the block as people wait for a chance to audition for the wildly popular show. The new film hitting theaters this week is Independence Day No. 2, set in a post-nuclear world where feisty senior citizens wearing nothing but Depends battle space creatures while keeping incontinence at bay. Starring Vin Diesel, Sylvester Stallone, Pamela Anderson, Will Ferrell, and Oprah Winfrey as the president. Our weather looks predictable. When the sun is not shining here it is certainly shining someplace else. Have a safe holiday and remember to be responsible. Don’t drink and drive, but if you do, don’t get caught.