David Ewalt's Of Dice and Men shows that Dungeons and Dragons is our world. 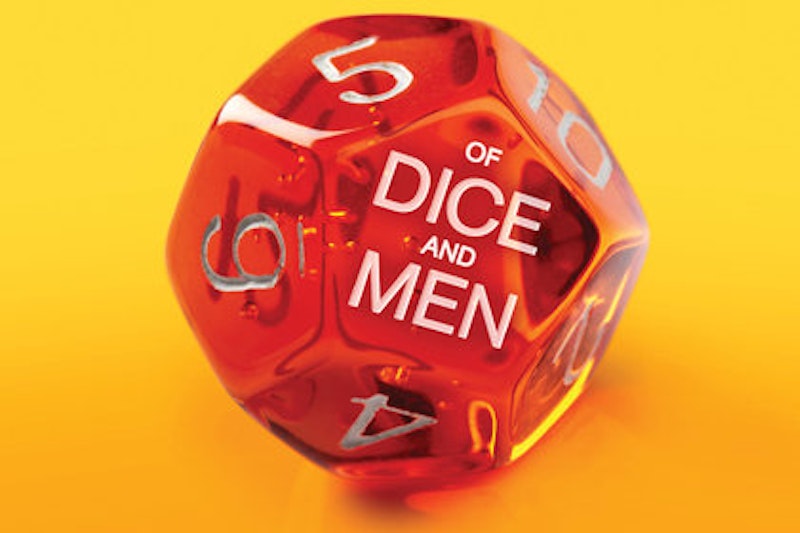 David Ewalt's recently published Of Dice and Men is two stories. On the one hand, it's a corporate history, tracing the conception, gigantic success, equally gigantic mismanagement, and ultimate corporate buyout of TSR, the company that created the Dungeons and Dragons role-playing game. On the other hand, it's a personal story of Ewalt's own quest for self-actualization through role-playing, as he learns to embrace his inner nerd, know himself, and have fun.

The personal and corporate merge into one when Ewalt, a writer for Forbes, is asked to a corporate promotional shindig for the next edition of D&D. Wizards of the Coast, which owns D&D these days, tells Ewalt he is one of their "trusted press partners" and he just about turns to an ochre jelly in enthusiasm. "The people who make D&D think I'm a respected member of their community?" he gushes. "It was something like Jesus, Krishna, or Delleb coming down from heaven and saying, 'Hey, man—you're pretty cool."

Obviously, this is a nerd apotheosis. Throughout the book, Ewalt has vacillated around his nerd identity, expressing mortification at adolescent fascination with Dungeons and Dragons, and a kind of horror at the adult re-immersion in role-playing which the book chronicles. So the email from the Wizards of the Coast is the moment when those concerns are chucked, and even inverted. Suddenly, being into D&D isn't dweebish; it's the definition of "cool." And how is that transformation accomplished? Through fielding press releases at Forbes.

No one is going to be surprised to hear that geek has gone mainstream, when The Avengers and Bill Gates rule the world. But Ewalt's book suggests that the mainstreaming isn't an accidental detour, or a selling out. Rather, in Of Dice and Men, nerds end up looking mainstream because the mainstream is made for nerds, and, for all intents and purposes, the mainstream makes nerds. Ewalt spends a chapter describing his weekend at Otherworld, a live-action role-playing game that seems inspired equally by D&D and corporate team-building exercises—you dress up as a wizard or a dwarf, and then overcome obstacles through team work and creativity till everybody feels empowered and ready to race on to career success or overcoming personal goals. Otherworld is conceived of as a kind of Outward Bound character building exercise for non-role players, and while Ewalt enjoys it, he admits he didn't find it as transformative as everyone else did, because he's so used to playing D&D. "We all live in the muggle world," he says, "and only a few of us are lucky enough to get a peek into Hogwarts." Which sort of skips over the fact that everyone looks into Hogwarts; Harry Potter is the most popular cultural phenomena of the last 20 years. The metaphor that is used to distinguish nerds from everyone else doesn't link nerds to specific subcultural knowledge. Instead, it makes them look just like everybody else.

From that perspective, Ewalt's discomfort with his nerdom isn't a sign that he doesn't fit, but that he does. There's a rite-of-passage air to the confession of nerdom; a sense that you're joining everyone else in the common, modern-day, updated Joseph Campbell monomyth of cultural ostracism, self-acceptance, and triumph. And that monomyth is linked, as Ewalt suggests, to consumption; to find your soul is to embrace the things you like to buy. Like Dungeons and Dragons characters collecting treasure to gain experience levels, skill and power, the stuff Ewalt collects makes him more and more himself. And that self is our iconic modern day self: the cultural consumer with a hundred nerdy faces.

Being embarrassed about liking D&D doesn't mean you're a social outcast. Instead, it's a sign that you belong—that your story is everyone's story. Embarrassment shows that you viscerally feel that the mass-market culture you interact with is part of your soul; that it reflects upon you, personally, for good or ill. That's why I think Ewalt's right; the story of the self and the story of corporations that sell the stuff are two halves of the same story. You are that thing in the box, which means you are a unique character, and also that you're put together according to the rules.

It's hard not to be sardonic about this. But is Ewalt's vision so awful? Is it really worse to have nerd-brains actualized by capitalism than to have sinner-souls saved by religion, or citizen-soldiers armed by nationalism? Ewalt says that a bunch of people who went on that Otherworld live-action adventure really benefited from it; he mentions one woman who figured that if she could be a bold adventurer, she could rid herself of her crappy boyfriend, and then went ahead and did just that. Who am I to say that the geek-selves generated meme-like from late capitalism are worse than the other selves on offer? Who's to even say there are other selves on offer?

You can't roll up a character in any world except the one you're playing. And that one is the one where every attribute is a quantity, where every goal is a treasure, and where, inside every paladin or thief or dragon, there's a nerd pulling the strings.