The High-Strung Girl and the Beatles DVD

Fiction: It was telling her a secret. 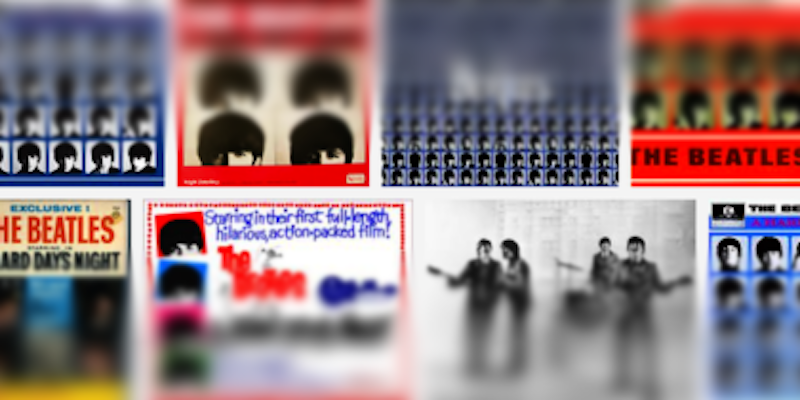 The young girl was driven to horror by the design of the menu pages on a DVD of The Beatles' A Hard Day's Night. In fact they showed notable skill, but this only deepened her distress.

The design fell into a grid, one formed by floating, round-cornered rectangles that showed glimpses of one photo or another of The Beatles back when they were making the movie. The girl happened to see this design in a window on her computer screen next to a YouTube page, one made up of panels where you could click for YouTube clips connected with the one you had just seen.

That YouTube page was a nest of rectangles inside a larger rectangle, each one with a person or people trapped inside, and there it was alongside the Hard Day's Night page with its floating, bubble-edged grid of Beatle pants legs and Beatle eyes. The girl had a seizure. The household was thrown into distress. Everyone hurried about as if something important were about at hand. The girl demanded paper and pens (a set of them, different colors). Crying and laughing, she started work. What emerged was a tangle of words and smudges and arrows that continued from page to page, innocent white paper beaming out from beneath a wicked load of attempted art.

When done, the girl herself lost interest in the thing; it dropped from her hand, and she shuffled off to the kitchen in search of Lipton's chicken soup, which she liked.

Adults bent over the manuscript, outdoing each other in clucks of knowing appreciation as they sought out fine points. “You Are Here” was the theme of the piece, repeated here and there. I think the girl had been especially taken by Paul's eyes, which gazed out from the round-edged blocks like a creature looking through bars. I'll note also that the blocks were all tinted a faint olive-green or grape-blue, with the boys lurking behind a screen. Existence looked like a refined mode of imprisonment, fractured at the basic level and then turned into individual cubes of freeze-dried pseudo-existence, existence through style.

That's what the girl took from the collision of YouTube and Beatles DVD, and she acted out the collision across the 20 or 30 blameless pages. You'll note my hostility. I see deep things in the girl's little work, yet I deny its value. All right, I don't like her—she has airs—and I don't see artistic value in a jumble of half-started design ideas and conflicting verbal flourishes. But I think she was on to something. She had a genuine jolt, the kind when you walk teeth-first into a big, basic fact that most people don't suspect is there. I envy her for that. But I'm not going to pretend she's an artist.

The DVD had a drumbeat that skipped along in a way that carried you. It took unexpected turns and reverses and charged forward and then hopped back. I don't know if it came from a Beatles track. I don't think so, it didn't sound like Ringo, and certainly not Hard Day's Night. Sometime in the 21st century somebody had come up with a drum track that was Beatles without being of The Beatles. The Beatles spirit had been captured by a craftsman and redirected into a piece of music that existed only to dress up a commercial repackaging of time-old Beatles product. Clever people had lived their work lives producing material of this sort, and when it was Beatles material they considered the job an honor, at least of sorts.

The Beatles blew in 50 years ago, and a great hop forward was taken by photography and graphic design and clothing and many other things that delight culture consumers. Not just music. It's like everybody in a media job at any level decided to try freshness and imagination and play around a bit, or at least tell themselves they were. Everyone became young, and our shared pop culture has tried to stay that age ever since.

They thought they were becoming free. Shake off the oldsters' dust and you could live your life as it was meant to be, with bonking and melodies and a great deal of attention to sunsets and the look and feel of raindrops on cool leaves. The bonking and melodies didn't keep anyone from becoming old, and the freedom and freshness turned into products that are now, at best, familiar but still beloved, as with a fine 50-year-old movie in a new DVD set.

The faces looked at the hysterical girl, faces that were fresh-eyed but trapped, black-and-whites of long-ago Beatles eyes and bangs locked into a fluid, lovely grid that seemed Beatle-like, and therefore free and beautiful, but also permanent and set in place. The drumbeat skipped along, free to dance forward and then drat back, over and over, free to never change. Next to the frozen Beatles were the cubes of miniaturized YouTube prisoners, fractured smaller and smaller.

“You Are Here,” the girl wrote, and launched into her multi-page crayon-and-ink convulsion. The adults crowded around her, wanting to know the secret of her art, her creativity. She had just seen the lives they're all trapped in—that's her secret.