Pilgrims time travel to Vegas in this updated BuzzFeed-era take on old chestnuts like “Young Goodman Brown” and “The May-Pole of Merry Mount.” 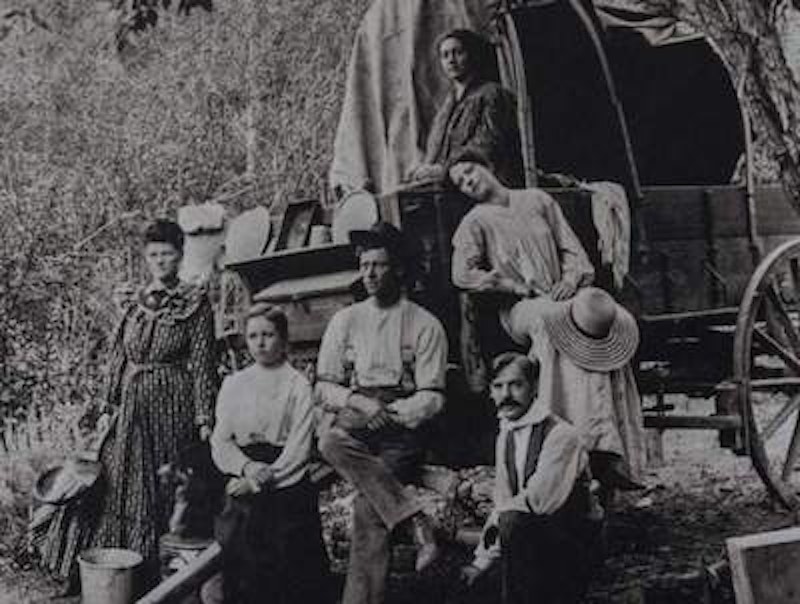 John Goodefellow sat in a red velvet zebra-striped armchair and heaved a sigh of deepest despair. He surveyed the wreckage around him in the hotel room. This was not goode.

Prudence Marie and Virtue Anne were passed-out drunk, draped over the slumbering form of Nathaniel Temperance, who wore naught but his buckled shoes. There were lines of not-yet-snorted coke on his belly, and a garden gnome by his side. "Crunk" rap music emanated softly from the large-screen TV.

John Goodefellow thought back to how it all began: They’d been strolling in the forbidding woods that edged their New England village, shooting the breeze about the Bible and patience and honor and things like that, when Nathaniel Temperance had espied a funny-looking knob on yon oak tree.

The magic oaken tree knob and whatever cosmic force was behind it saw fit to plop the four smack-dab in present-day Las Vegas. Don't you tell me the Universe doesn't have a sense of humor.

Of course, John Goodefellow and his chums didn't know they were in the future, much less about Las Vegas. Las Vegas didn't exist in their world, because oh yeah, I forgot to tell you earlier that they were pilgrims. Puritans, in fact. Well, now you know.

At first they thought they had gone to Hell. "Nathaniel Temperance, if you had been practicing the goode virtues of prudence and abstinence, you never would have pushed on that magic tree knob and this never would have happened!" shrieked Prudence Marie. Prudence Marie was kind of a judgmental shrew most of the time, to tell you the truth.

"Well, we're here, so we might as well make the best of it," Nathaniel Temperance said. "I mean, look, shiny lights and things. Let's have a look around this Hell, shall we?"

Virtue Anne gaped at her new surroundings with wide-eyed apprehension. She tugged on the sleeve of John Goodefellow's pilgrim-boy blouse. She whispered, "John Goodefellow, my flesh is not burning. I thought that in Hell your flesh would be burning...?"

John Goodefellow looked down at Virtue Anne's hand on his pilgrim-boy blouse sleeve. This was considered second base for pilgrims. John Goodefellow had always secretly had the hots for Virtue Anne. He patted her on the bonnet, which is something a pilgrim man ordinarily would only do with his pilgrim wife. But "ordinarily" goes right out the window when you're a pilgrim who's just been hurtled into the future to find yourself on the sultry streets of Las Vegas. "It's okay, Virtue Anne. Maybe the burning flesh part comes later. It’s passing fair hot on this macadam, though. I suppose we'll wait and see what becomes of us."

And then a thought occurred to him—a wicked, not-goode thought!

"Oh, ha ha, what authentic-looking costumes!" exclaimed a lady wearing a fanny pack, a "U.S.A.!" t-shirt, and (inexplicably) a Mickey Mouse ears hat. Nathaniel Temperance spun around and cast a protective arm over Prudence Marie. "Silence, demon!" he seethed at the Mickey Mouse ears lady. He grabbed Prudence Marie's arm, which can get you pregnant if you're a pilgrim, and whisked her inside a casino that sparked neon into the black desert night.

"Look, we are already in Hell. I mean, what's the worst that can happen?"

"I don't know, John Goodefellow. I've spent my whole life fearing and reviling the deadly sins. Not just because they were forbidden and I would go to Hell if I did them, but because most of the time I understood why they were wrong. Life is not just a cosmic game of 'Simon Says.'"

"No, I mean, that game does not exist in pilgrim-world, so you are just talking crazy talk, Virtue Anne."

"My point is that I... I can't let you touch my bonnet, John Goodefellow. We are not betrothed, nor have we been made man and wife in the eyes of the Lord. I just can't. I'm sorry."

Virtue Anne quickened her pace and scurried into the casino behind Nathaniel Temperance and Prudence Marie. John Goodefellow sulked. "Your loss, babycakes," he muttered.

Virtue Anne was feeling rather verklempt and tried to disappear among rows of slot machines. She stopped just once, to peek back at John Goodefellow. Two hookers had sidled up to him; one had removed his tri-cornered hat and was stroking his hair, and the other one patted his rear! Virtue Anne had secretly had the hots for John Goodefellow and had hoped they would one day be betrothed. I guess I could have told you that earlier, but now seems like as good a time as any. "Trollops and floozies!" Virtue Anne cried out tearfully, but her indignation was drowned out by the bleeping and the blonking of the slot machines.

Nathaniel Temperance and Prudence Marie had acquired some future-money from families asking to pose with them in photos. "Like whoa," said Nathaniel Temperance, staring at the fistfuls of green in their hands. "Whatever shall we do with all this money?"

"Gamble it," said Virtue Anne, who had appeared just in time to catch Nathaniel Temperance's question. Her eyes were dark and her cheeks were flushed. She was in quite the tizzy.

"Gamble it?" balked Nathaniel Temperance. "Virtue Anne, whatever has come over you? You know it's imprudent and, uh... un-temperance-ful to risk what you already have in the greedy hopes of something bigger, something that's maybe more than you deserve."

Virtue Anne said: "John Goodefellow was just saying that we're in Hell already, so why not do whatever we want?" And as if to demonstrate, she plucked some cash from Nathaniel Temperance's wad, went up to the bar, and ordered one Red-Bull-and-vodka and one "car bomb"—both drinks were for her. Yes, Virtue Anne was double-fisting. She downed the beverages quick as lightning, and then—she yanked off her bonnet!

Prudence Marie struggled for a moment to rein in her judgment, apoplectic with righteousness. But... Virtue Anne looked like she was having so much fun, what with the boozing and the not-bonnet-wearing. Why, Virtue Anne was living la vida loca!

So Prudence Marie ordered the pilgrims a round of jello shots, and she yanked off her bonnet, too!

"I am starting to think that we're actually in Heaven, ha ha!" said Nathaniel Temperance, wrapping his arms around both girls.

He stammered, "Virtue Anne! I thought... I mean, I hoped... we were to one day be betrothed! What was all that talk about how I can't touch your bonnet because it's just wrong, even in Hell?"

Virtue Anne knocked back her jello shot and said, "You were right, John Goodefellow. Anything goes now. There is no right or wrong. There is no more reward or punishment. There's just existence, and I'm going to do whatever feels good right now."

She kissed Nathaniel Temperance on the mouth, and then she kissed Prudence Marie on the mouth! Afterwards, she jumped up onto the bar and performed a belly dance, gyrating her hips in a most lascivious manner!

John Goodefellow stormed out of the casino.

But wasn't this what he wanted?

What he wanted was a proper courtship with Virtue Anne, and then to be betrothed to her. He wanted a family with her; he wanted to grow old with her. He wanted to one day be buried side-by-side with Virtue Anne, in a pretty cemetery on a hillside, their etched names growing faded and covered over with ivy, but the fading of their names wouldn't matter, because their souls would be together in Heaven.

John Goodefellow took it upon himself to be the responsible adult and get them a hotel room. The little envelope for the key-card said: "Welcome to Las Vegas!"

"Oh, I thought I was in Hell, what with all the godless hedonism and the bacchanalian shenanigans and the ladies of ill repute," John Goodefellow had said to the check-in desk guy.

The check-in desk guy was wearing a "wife beater" tank top and swigging a “Black Death”-brand brewski. He said to John Goodefellow: "Buddy, you are too uptight—you gotta get laid."

... And now John Goodefellow watched over his three friends, spent and prone on the hotel bed, aural barrage of popped abscesses and blackheads, 600-pound humanoids rinsing their taints with sponges at the ends of long sticks, and polygamous sexism humming from the TV glowing blue in the otherwise-dark room. Virtue Anne was wearing low-rise jeans and a leopard-print bra; she was lying on her stomach, so he could study her new lower-back tattoo: Winnie the Pooh and Piglet done up in face paint to look like former WWE tag team champions Demolition.

John cringed. Perhaps this world wasn’t Hell, but it was surely an alien country, a dry and forbidding landscape on which the death drives of the vacant-eyed people stretched all the way out to the horizon. Deep in the recesses of his memory, he recalled a hot take from that old gaslighter King Solomon, who was lamenting a lifetime devoted to toxic masculinity. “Vanity of vanities; all is vanity,” Solomon had said. “There is no remembrance of former things; neither shall there be any remembrance of things that are to come with those that shall come after.”

So what now? How would they ever get back to where they'd started? Was that even possible? Or did they know too much?