Fifty Years of Hagstrom and Me 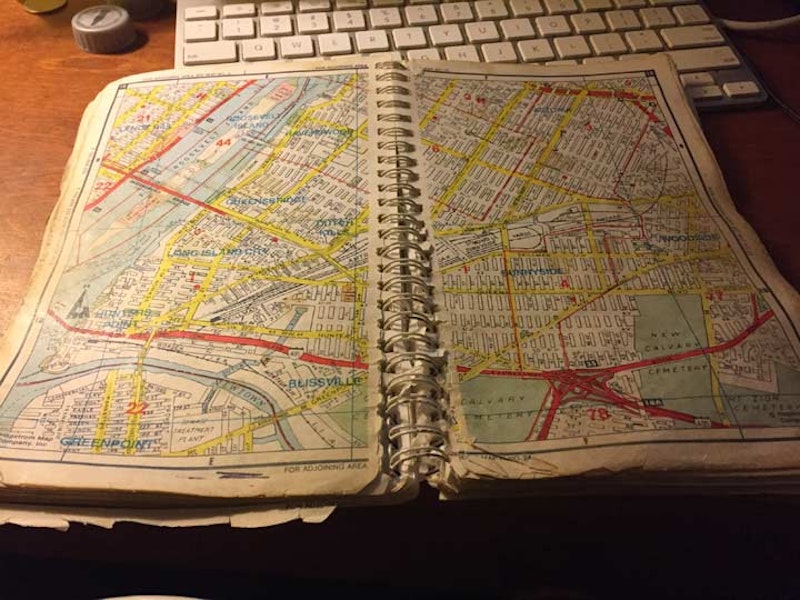 I was shuffling around the West Maspeth area recently, which is mostly industrial and about 20 percent residential. It’s a little wedge of Queens located south of where the Brooklyn-Queens and Queens Midtown Expressways meet in a mess of spaghetti connections, west of 58th St. and north of the Long Island Rail Road freight tracks. For about 20 years, this was the world headquarters of Hagstrom Maps.

I may have mentioned this previously, but I’ve been fascinated with street maps almost since birth, especially my hometown NYC. My first Brooklyn map was a Hagstrom purchased at the Gertz Department Store on Jamaica Ave. in the summer of 1968. The old man was there to purchase a wood wall unit for his stereo equipment. Mission accomplished: he stuck with what we got to his dying day in June 2003. We went to a restaurant and he sent the steak back twice because it was pink in the center. And we got the Brooklyn map. It wasn’t my first: I’d been collecting Geographia’s “Little Red Book” street guides; I already had Brooklyn and the 5-Boro editions, both of which came with a folded-up black and white map glued within. 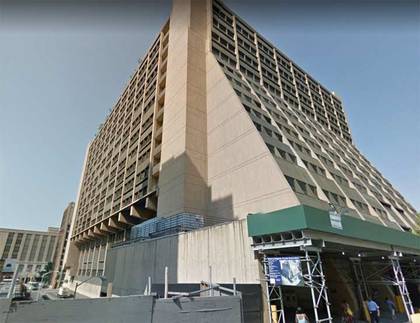 I saved money and in 1971 purchased just about every city street map all over the country that Geographia offered by mail order. That same fall, my mother and I went to what was then Hagstrom headquarters in the same building at 450 W. 33rd near 10th Ave. that The Daily News has offices in today, and was the former home of SkyRink, which has moved to the Chelsea Piers sports complex. Built in 1971, it looked like the above picture on my visits, but has since been sheathed in glass panels to resemble the buildings going up in the Hudson Yards complex. I came away with the Philadelphia-Camden folding map.

In the 1980s, I worked nights. I’d often get a train into midtown in the afternoons, head for the NY Public Library at 5th Ave. and W. 42nd, head for the Map Room and look over their NYC editions, especially the early edition Hagstroms. The library personnel would tell me they couldn’t scan them, since the drum scanners would damage the maps. When digital cameras came along in the 2000s, I had to be content with photographing sections laid flat on the tables, with middling results. I’ve since found digital files some 1922 Hagstroms.

My first Hagstrom edition purchased in 1968 had a cover like this one. Hagstrom updated its cover cards to match current typographical tastes every few years, but always stuck with its original hand-drawn editions from the 1920s, updating them with new or changed streets. The originals lasted until the end of the 20th Century, when the hand-drawn maps were scrapped and replaced with CAD (computer-aided drawings). Hagstrom was known for its New York City maps, but also expanded its coverage to about 100 miles outside the city, with editions for suburban Long Island, New Jersey and Connecticut suburbs. And its Philadelphia map was as thorough a map of that complicated city I’ve ever seen. In the 1970s, Hagstrom licensed other map companies to produce maps of places like Boston, Dallas, Atlanta and Kansas City, but these were CAD and therefore, unsatisfying. 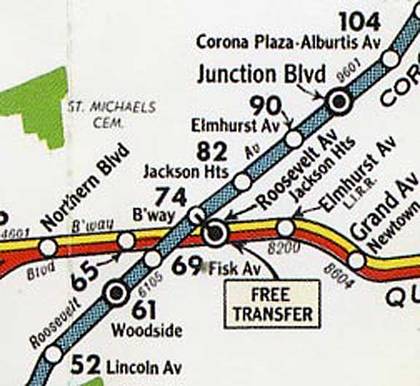 In the 1940s Hagstrom produced one of the greatest NYC subway maps ever made. The IRT, BMT, IND and elevated lines were color-coded and stations were boldly marked. Many hotels and restaurants licensed Hagstrom to make subway maps branded with their names. The Transit Authority considered it official, until more abstract maps appeared, and designers Massimo Vignelli and then, John Tauranac produced official MTA maps. 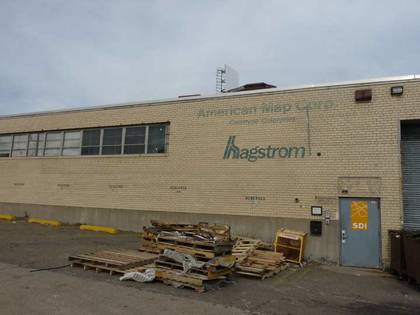 After I sent in several corrections to Hagstrom in 1981, Greg Christiano, director of their research department, asked me to interview for map researcher at 450 W. 33rd St.. I wasn’t chosen, but enjoyed the tour around the plant in the days before computers and CAD.

I was between jobs again in 1992 and interviewed again at their Laurel Hill plant, shown above on 54th Rd. west of 48th St., shown above. Each time, the pay was lower than I would’ve liked, but still, I would’ve enjoyed working for them part time at least. And, I actually got into the Hagstrom inner sanctum at two of their locations. My former webhost, Paul Matus, worked for Hagstrom in 1967 and sent me this reminiscence:

“Every now and then, when [founder Andrew Hagstrom, still there after 50 years] encountered me in one of the hallways of the building, he would talk me and loved to take me over to one of the documents on the wall which featured the Hagstrom logo, a Viking ship on the high seas. He told me that the ship represented him, who came to the U.S. without two Kroners to rub together, and through hard work built up this great business. But his special satisfaction was in telling me that he didn’t have a college degree and didn’t much care for people who did. ‘I never went to college but now I hire and fire college graduates everyday,’ he said with great satisfaction. He must have told me the story a half-a-dozen times, as though he had never told it to me before.

Of all his maps, his New York City subway map appeared to be his pride and joy. It was the official map during the 1940s and 50s and was in the New York Telephone yellow pages until the TA hired someone else to produce its more diagrammatic London Transport-style map about 1958, which the old mapmaker disliked. He thought maps should be graceful looking and reasonably geographically correct. Even after the TA abandoned the traditional BMT, IRT and IND divisions on its map, Hagstrom retained them and their traditional map colors: BMT yellow or green, the IRT blue, the IND red, and elevated lines as thin black lines.”

The glory days of Hagstrom maps are over. The retail store on W. 43rd off 6th Ave. closed a decade ago. The company has changed hands frequently, from Macmillan to Langenscheidt to Kappa Publishing. Google Maps does an excellent job and is my current-go-to, along with Open Street Map. Both are online as the era of paper maps, and anything printed on paper is winding down.