The Drinking Culture In Japan

Tokyo's one of the best cities in the world to drink in. 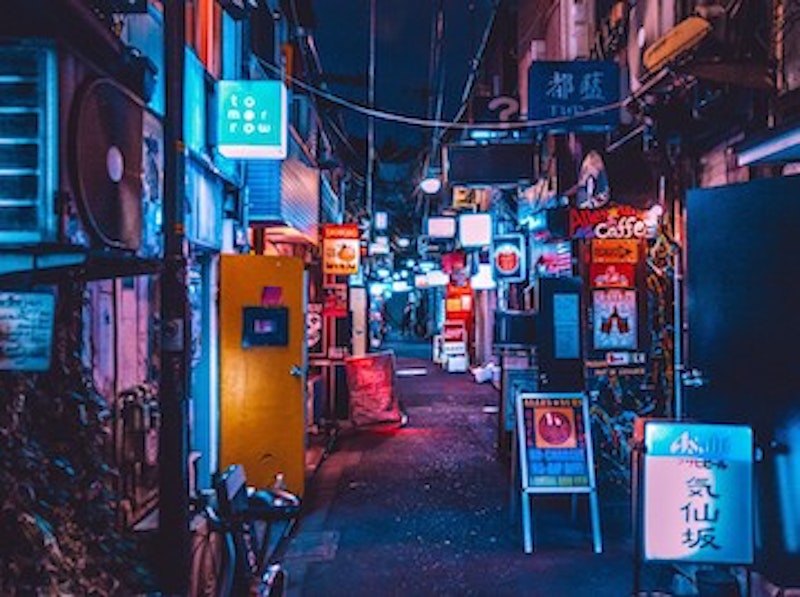 Tokyo’s a booze-fueled city. Riding on trains at night when I used to live there, I'd spot the casualties left and right, usually clad in the generic salaryman suit. There was a good chance that these corporate soldiers’ drinking sessions hadn’t been elective, and that they'd be right back at it the next night after work, and then sleeping on the train to the office the next morning. It's a rollercoaster ride that won't ever stop for some of them.

I used to ask the many salarymen I'd encounter what they did on the weekend. There were two standard replies: “Sleep” and “Family service” (pronounced “saabisu”), which is how Japanese men refer to such activities as going to the park with the wife and kids they barely see during the week. Implying that it was merely fulfilling a social obligation always struck me as ignoble. There was a dreariness to these replies as well—a hint of two-dimensional, unimaginative lives lived on autopilot because of the expectations of others.

Late at night, you can walk around one of Tokyo's “entertainment districts”—Shinjuku and Shibuya are two of the main ones—and watch people (always men) falling down or puking. The puke ritual often involves a buddy rubbing the hurler’s back, a practice I never got used to. In my book, that's not deserving of sympathy in a public place. Leave him alone in his shame.

Drinking together is a regular, and often non-discretionary, part of a working day for many Japanese. Saying you’d just like to go home after working all day's not an option. Sometimes it's just an informal gathering of co-workers hitting a few bars after work, while on other occasions it's in the form of a nomikai, an organized drinking party to mark things like the completion of a project or the hiring of a new employee.

Drinking parties extend beyond the workplace. You may imagine the cherry blossom season in Japan as all about Japanese people communing with nature in some quiet, Zen-like manner, because everyone knows that the Japanese are very close to nature. In fact, it's more of an extended springtime bacchanal. Every night, and during the day on weekends, groups of people are everywhere sakura can be found, sitting on blankets and knocking them back.

Much of the post-work drinking is done at casual establishments known as izakaya, where they serve a variety of small plates similar to Spanish tapas. In the more traditional izakaya, you sit on a tatami mat, which takes getting used to. Beers come to the table in large bottles to be shared. It's a faux pas to pour your own beer—wait for someone to pour it for you. When the situation calls for politeness, you should tip your glass towards the pourer. In less formal situations, you can just tap your fingers next to your glass in acknowledgement. It's a society of rituals.

You can drink a lot this way because you're not ordering your own drinks, so you can't count them. I'm convinced that this system, plus the fact that almost everyone commutes by public transportation, is responsible for much of the drunken staggering around in the evening streets. Also, if you're a kouhai (junior member of a group) and your senpai (senior member) is pressuring you to drink a lot, you may be challenged to make it home intact.

I found myself in such a situation at lunch one day in Harajuku, the place famous for its teens with wild fashion senses. An older gentleman who was hosting three of us at a nice Chinese restaurant decided, for a reason he chose not to disclose, that two of us were going to drink shots of expensive Scotch at various intervals throughout the meal. We didn't mind.

The Japanese tend to be reserved. Alcohol loosens people up and allows co-workers to bond. Japan’s unique in that anything embarrassing you do while under the influence is forgotten by the next day. If you’re going to mouth off to your boss, do it while drunk.

A friend once told me about someone she knew who went back to the office after a long drinking session and passed out. He was lying on the floor when people started arriving for work the next morning. Here in the U.S., where every drink in a business situation is monitored, HR would’ve worked to get him into rehab, but they just laughed about this guy. The concept of alcoholism in Japan’s related more to the lack of ability to control yourself when drinking than the consumption levels. As long as you don't get violent, people aren't going to tell you to get help.

There's a staggering variety of bars in Japan. I've been drinking at joints in the Golden-gai district of Tokyo that seat only six people, all at the bar. There are jazz bars, bars where you have to stand, and hostess bars where attractive young ladies are paid to drink with you and make you feel like the most interesting man in the world. These places are to be avoided unless you're being hosted by a Japanese person, as an hour of drinking could cost you hundreds of dollars.

The drinking age is 20 in Japan, but it's not strictly enforced. You never see people checking IDs. You can buy a beer and drink it on the train, or at any place in the city you can find a place to sit down. I used to have a beer vending machine right in front of my house, which was convenient.

All things considered, Japan’s an excellent place to drink. People drink a lot, but they don't get into fights. You can relax because you're taking the train or a cab home. If you miss the last train at around midnight, you can keep bar-hopping until around five o’clock when the trains start running again. Those nights can get very interesting.