We cycle through lives trying to offload our delusion and our evil. 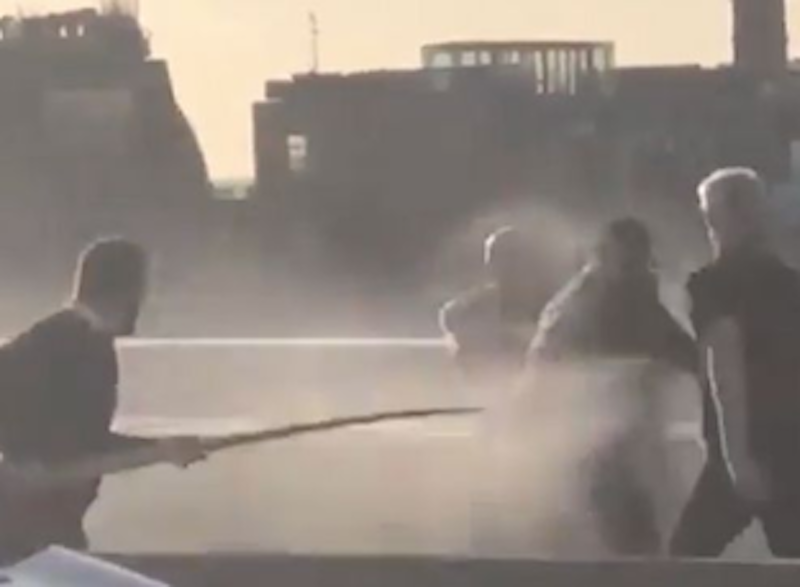 Occasionally, an event comes along that has the symbolic weight that one might expect from a novel. Admittedly, lugging symbolic weight around—even in an electronic file—is exhausting and profitless, which is why I avoid novels. But I find it hard to ignore apparently potent apparent symbols when I run into them. If the symbols are real, it's not just a filmmaker making it all up and dropping it on you like a ton of symbolic concrete. And occasionally, as in London last Friday, cosmic karma seems to put in an actual appearance on this plain of reality.

On Friday, Usman Khan, who’d been convicted in 2012 for planning terrorist attacks in London, was speaking at a conference for “prisoners and their mentors” called Learning Together, sponsored by Cambridge University. Khan apparently left after a session in which he spoke about his experiences in prison and his rehabilitation, and then started stabbing people on London Bridge, killing two, including the organizer of the conference. That doesn’t bode well for Learning Together; the attack has too much symbolic weight.

You may have noted the narwhal horn angle, which everyone agrees has a barely-believable quality. As Khan slashed about in Fishmongers' Hall, a man described as a "Polish chef" grabbed a handy and very long narwhal horn from an elaborately-decorated wall, chased Khan out onto the bridge and started prodding him or possibly impaling him with it, while another man sprayed him with a fire extinguisher. Even the fire extinguisher angle has a nice symbolic feel, but the narwhal horn touch appears to have been written by J.K. Rowling or Ang Lee. Narwhal horns were once thought to cure illnesses and enhance longevity. Possibly not, however, if you take one through the gut. On the other hand, it was good for the longevity of the other people on the bridge.

These are all extraneous symbolic details, however, compared to this: one of the people who subdued Khan was James Ford—also attending the Learning Together conference—who in 2004 was convicted of murdering a 21-year-old disabled women named Amanda Champion and sentenced to life in prison. He was on release from "an open jail in Kent." (How open something can be and still count as a jail is a question that will have to await another column.) Trying to reconstruct the events from the somewhat chaotic reporting, it seems that Ford may have wrestled Khan to the ground and disarmed him.

So, even as Khan's actions seem to discredit the idea of mentoring and releasing prospective or actual murderers, Ford's seem to recommend it or at least to suggest that even a murderer may have a positive contribution to make. It's worth pointing out that the family of Ford's victim was not much impressed, or at a minimum does not believe that saving lives is an adequate cosmic compensation for taking them.

“He is not a hero," the Post quotes Champion's aunt as saying. "He is a murderer out on day release, which us as a family didn’t know anything about. He murdered a disabled girl. He is not a hero, absolutely not. I don’t care what he’s done today, he’s a murderer.”

So this has left me wondering. Sometimes we, and particularly religious people of various sorts, think of this world as a moral proving ground. Perhaps Saint Peter will meet you at the Pearly Gates with a tally sheet: yes, you acted like an asshole here and there, and engaged in some transgressions of God's rules. On the other hand you were nice here and there as well, or generous now and then, and you did something good in 1997. Your overall score is +3, and we'll welcome you to Paradise after a brief millennium in purgatory. Or, karma is a kind of cosmic score sheet, with your good acts and right thoughts on one side of the ledger and your cruelty and ignorance on the other. We cycle through lives trying to offload our delusion and our evil.

On both these views, you can compensate for the bad you do by doing good. This is our approach to many moral matters. It's why, for example, a robber baron endows an art museum, or a woke white person tries to be an “ally” to compensate for the privilege he has enjoyed. No matter what we may say, this idea is at the heart of our practices around crime and punishment; fundamentally, it’s why Khan and Ford were in prison in the first place. I think that, deep inside, we all feel that evil can be atoned for, and if your own evil can't be atoned for by doing good for others, it can at least by atoned for by your own suffering. If you have inflicted suffering, we think, you deserve to suffer. It may be that no amount of suffering can fully atone for the murder of "a disabled girl"; nevertheless, we aim to try to inflict it.

If this life really was a moral testing ground, if God or Brahman or the Order of the Universe was really keeping moral score, then if Ford saved lives last Friday, he compensated for having taken a life 15 years before. It's hard not to understand Ford's actions as at least somewhat redemptive. Perhaps he was even thinking of them as redemptive, and he did prove that he’s not only, not merely, a murderer. Probably, few are.

But the idea that karma is a tally sheet or that God is keeping track of your sins and your regrets and your “Hail Marys,” or that karma is a kind of moral credit score, or that you can make up for your moral mistakes and transgressions in any way whatever, leads to impossible puzzles. No matter what James Ford does now, he will never not have killed Amanda Champion. No matter what he does, it won't revive her; it won't allow him to travel back in time and not have done what in fact he did. Later actions might change the interpretation of earlier ones to some extent; it cannot expunge or erase them.

But I think it’d be very difficult for us to simply let the idea of moral compensation go, with regard to other people and to ourselves, even if I don't see how it can be justified. When I see that I've done something wrong, I want to make up for it, try to fix it, try to prove that I'm not only a bad person. When I look at myself in the mirror, I don’t see a person who hasn’t done wrong, but I want to see a person who can be redeemed by my thoughts and actions now. The only puzzle is how that can possibly be, when I can’t unmake by any thought or action what I've already done.

You really are going to need a supernatural being or reality to make sense of this, which is one of the reasons that so many cultures postulate such beings. Even though we can't see directly, in this life, how giving people the punishment they deserve makes them better people, or how doing good things—even just by apologizing—balances the bad we do, or compensates others for it, we, or at rate I, still need to believe it, still do believe it deep inside, even though even I can see that it’s false. And though we can't really show that the universe has anything to do with our sense of justice, there's something to be said for believing in karma, if it gets murderers to start saving lives.