My Neighbor Was Darth Vader 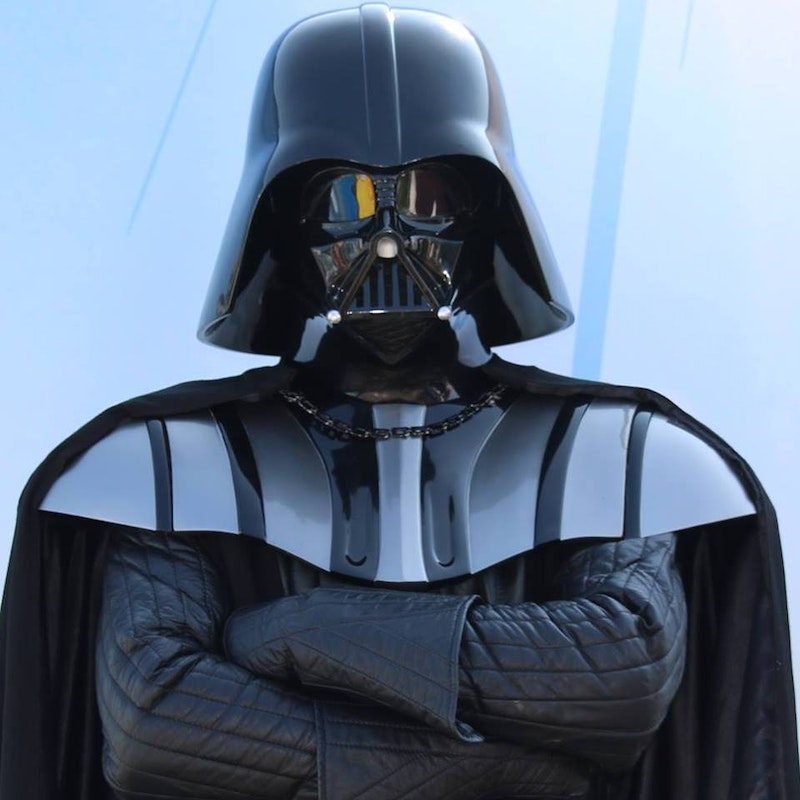 In the mid-1980s, I lived near Melrose and La Brea just south of Hollywood. My neighbor was a 30ish guy named Chris with greasy black hair and a budding beer paunch. He lived with another guy in a one-bedroom cottage next door. We didn’t speak much, just small talk while passing each other in our respective driveways. One day I noticed Chris walking home in a heavy black costume and cape with shiny black boots. He was carrying a Darth Vader mask in one hand and a plastic light saber in the other.

“Living the dream,” he answered.

“What’s with the Darth Vader getup?”

“I’m getting home from work.”

“What kind of work you do?”

He entered his home without another word. I figured he was doing some magazine work, maybe a television commercial. I knew he didn’t have a car so he must’ve been walking from the bus stop a few blocks away. Over the coming months, I saw Chris in the Vader costume on numerous occasions. It struck me as odd. I couldn’t imagine any business having a long-term need for a Darth Vader mascot. If it were a George Lucas production, Chris surely would be making enough money to buy a car. When his costume started looking haggard, I guessed he wasn’t working for Lucasfilm.

Over the summer, Chris’s roommate invited me to a tiki party at the house. The party was packed with young actors and filmmakers. Chris held court in the backyard wearing a Hawaiian shirt and chinos. He was tan and freshly coiffed with a Corona in hand. I asked how his acting was going. He said he was busier than ever. We toasted to his success and I drifted through the party. At one point, I conversed with a young woman who lived across the street. She was also a struggling actress and our conversation inevitably turned to Chris. I asked if she knew anything about his Darth Vader gig.

“Oh yeah,” she said with a mischievous smile. “He’s a Hollywood ragamuffin.”

“He dresses in costume outside Grauman’s Chinese Theater for money.”

“As long as he doesn’t ask for compensation. He takes photos with tourists and they give him tips.”

“That sounds brutal,” I said.

“He makes more money than I do,” she replied. “There’s a bunch of his workmates at this party.” She pointed out several men around us. “That guy plays Elmo. That’s Freddie Kruger. I think the guy in the corner is a ninja turtle. Chris told me they’re trying to unionize.”

“Wearing a costume in 100-degree heat ain’t no joke. They’ve all been beaten and robbed. And the work isn’t something you can put on your resume.”

One day I saw Chris walking home with bruises on his face. I asked if he was okay. He flashed a peace sign and disappeared into the house. A few weeks later I was awoken at night by the sound of shattering glass and screaming. The police arrived to find a drunken Chris in his backyard, smashing beer bottles and yelling like a mad man. He was handcuffed and taken away. When I saw Chris later that week, he didn’t mention the incident.

Around Christmas, I noticed a U-Haul parked in front of the house. Chris’s roommate was hauling boxes to the truck. I asked where he was moving. He said he found a place in North Hollywood. I asked about Chris. The guy gave me a cold stare and said, “Don’t know, don’t care.”

Later that day, the U-Haul was gone. Chris sat on the patio with empty beer bottles around him. He had a black eye. I approached him.

“Found a place yet?”

“Minnesota. I’m moving back with my parents.”

“It’s either that or some alley downtown.”

He lifted his beer in a toast and then disappeared into the house. That was the last time I ever saw him. A few weeks later, a young couple moved in. I introduced myself and offered to help lug boxes. I noticed a pile of old clothes in the living room. Atop the pile was Chris’s battered Darth Vader helmet.

“Who lived here before us,” the new tenant asked.

“He played Darth Vader, but he was kinda off-Broadway if you know what I mean.”

“I don’t,” he said. “I‘m new to Los Angeles. I’m still trying to figure out how people make a living here.”