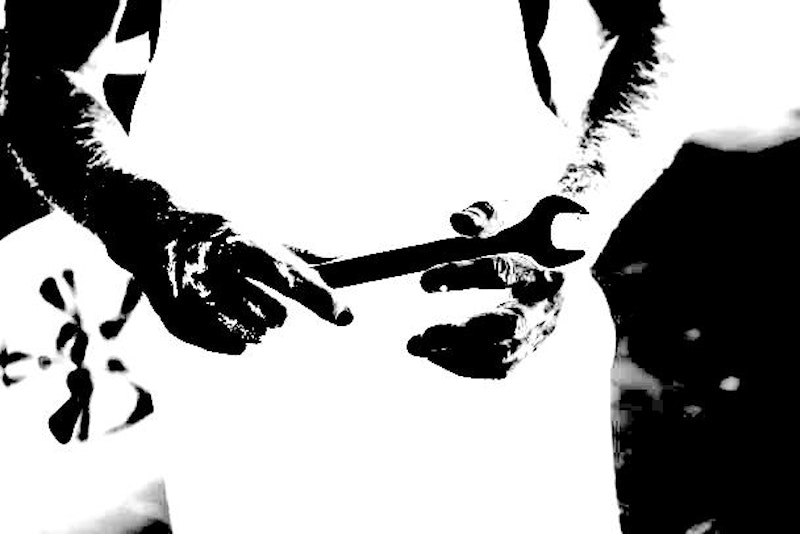 I’m happy to say the handyman now has an apartment. The useless old drunk nearly got his comeuppance. After decades of boozing and lounging, he found himself evicted from his previous apartment. The poor fool’s pushing 70 and his right ankle has been shot for more than a decade. He drags along with a cane, and it hurts. Even then he can’t go more than five or six blocks without his bladder popping open and his pants getting wet. I mean he’s helpless. He would’ve died out there. But no, he has a new home. A shoebox apartment in a rather nice neighborhood. Tucked away in the back, for the rest is filled with his daughter’s boxes and furniture, the handyman lies on a skinny mattress. His TV set is before him, his mini-fridge beside him; a pack of cigarettes leans against an ashtray, and a newspaper TV section (folded to the listings) is wedged against the base of the apartment’s picture window, which opens and closes a modest but safe distance from the old man’s head. Empties, lying on their side, have begun to accumulate between the window and the mattress.

His daughter found the place. She was evicted too, the pair of them, and she’s a former meth and/or crack addict. She’d lost her house and come to live with her dad in his hole of a first-floor apartment. This was the last place, in a dinky building whose owners had been trying to tear it down for a year or so. It was too small for the handyman, and Tally, though not large, tends to make a lot of noise in the form of disordered conversation. Plus, the building was essentially abandoned. Gaps had opened in the ceiling; then one opened in the floor. The gap in the floor was only a foot or a foot and a half across, but it had margins, a wide border of soft wet brown where the tiles (also brown) had rotted. I saw this on my final visits there, just before the eviction and then when the eviction happened. To me it seemed like the place had given up and begun to suppurate; no more of being an apartment, it would be a festering wound. I preferred that thought to considering the possible origins of damp brownness, and anyway the weather outside stank, the handyman lay in his bed like a bearded stick, terrified and watching TV, and his poor daughter was trying to sound chipper as she boxed her tons of belongings before the landlord paid his final visit.

That was May 13, a day of cold rain and dark skies. When the handyman and his daughter were kicked out, I thought they were going to die, and I don’t usually know people who face death. There you have my angle on the crisis: it brought me into the deep waters of human existence, which is where I want to stay out of. Thanks to the handyman’s daughter, I can do so, at least for now. She found them a place and found a co-signer and it wasn’t me, thank God. I did help. I gave them money when they really needed it, most especially the money for their security deposit and first month’s rent. But co-signing would’ve been deep waters, and the same for the other apparent choice, that of letting them live on the street and seeing how soon they died. Now the two choices are gone. The handyman and his daughter live, and I signed nothing. I avoided the deep waters. (Again, my particular angle on the matter.)

Back to the new place, the shoebox apartment with the little man tucked at the end. I sit on the sill along the picture window, legs folded up, and yes, the signatures are there. The handyman called up because he needed money, what with the hotel having cost a lot and Social Security still 10 days away. I asked if the lease had been signed?—co-signed?—and he said, oh yeah, that was done, and he’s correct. I see the owner and the co-signer right on the lines where they should be. We’re in the clear.

The handyman watches TV; his daughter sits on a carton; behind her begin the massed piles of her possessions, lately retrieved from storage with a semi-estranged relative. “Congratulations!” I say. “You have a home.” I want to make this point, go on record with fate. “You did it, Tally,” I add, extending my statement. “I’ve known this guy 21 years and you saved him from dying.” Naturally she says I did it. The handyman listens but still has his eyes on the TV.

The old man’s beard is overgrown and wiry, and he’s bald like a dented gray egg that has a grizzled hippy fringe glued near the base. Left to himself, his eyes tend to shift back and forth, without any purpose that I can see; he’s restless. Now he thanks me for the five 20s and pair of 50s that I hand him. “You’re an angel,” he says, voice low but firm, making a point, and he tells me again before I take off. He’s still alive, and he never used to say thanks, so I guess we’re all making progress. I’m just glad I didn’t have to do more.