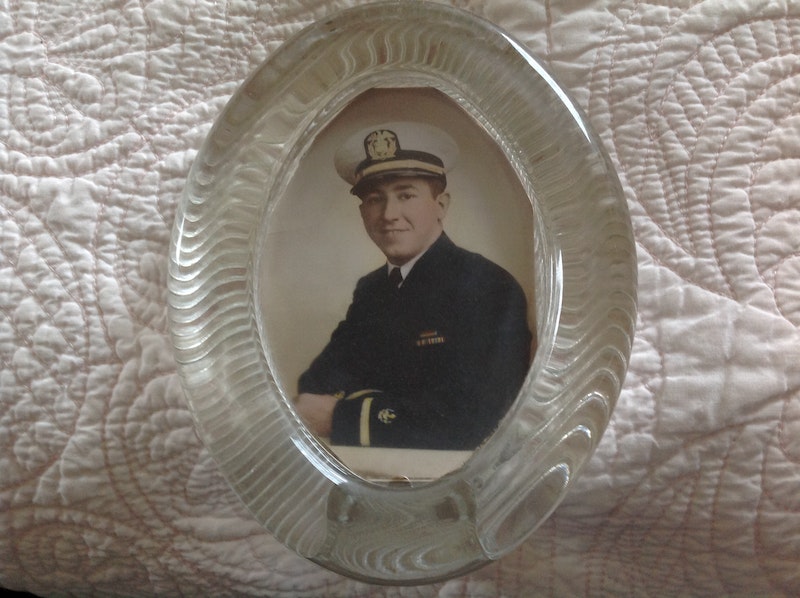 We didn’t see Dad much growing up. He was a Merchant Marine for over 30 years, always leaving and shipping out most of my childhood. When he was around I was usually terrified about being punished, which could get physical. I can’t speak for my siblings but I’m betting they had some strong feelings on the subject of daddy too. He was an old country Sicilian who grew up during The Great Depression. Those hard times never left him. He served in WWII, Korea, and Vietnam running supplies and munitions. He lived a frugal life out of habit. He’s gone now 17 years, but I still wake up some mornings filled with dread thinking I did something wrong and my father’s going to give it to me good. He was an ass-kicker kind of guy, a back-hander, and even got a punch in now and again. His old-school, hard-knocks way carried him through life like many Depression kids. He had to fight to survive, never truly letting go of the bad old days. They were rough times for tough people.

War has devastating effects on those up front and close. My old man was no exception. I believe the Depression in combo with the negative effects of war left a permanent scar on Dad’s psyche. He was never comfortable or happy. Everything irritated him and provoked anger. During those times the term Post Traumatic Stress Disorder wasn’t common but I’d say he had it. Although the Merchant Marine was not technically military they abided by military code, and uniform. They saw plenty of wartime action and horror. During WWII my father was aboard ships that were fired at and bombed by enemy planes and on one run was torpedoed in the Bering Sea, engines dead, floating in the water for weeks, sitting ducks until rescued. He claimed he was so scared during that time, his hair turned gray and fell out. He was a religious man who believed the holy hype. He was a faithful churchgoer until the day he could no longer physically walk up the hill to Saint Dominic’s Catholic church on Harford Rd. You might wonder how such a religious man could be so angry and discontent. I still do. When he was a boy he sold newspapers, hawked apples, and shined shoes to make money to help his parents. His father was a shoemaker. His mother took care of her eight children. Not a perfect situation. He learned his street smarts at a young age and knew how to take care of himself when necessary.

There’re no easy answers for my father and other men of his generation. Those old country guys actually believed women should be barefoot, pregnant, mute, and chained to a stove. They also believed in proudly serving their country. They definitely bought the American Dream. He had many cliché sayings, but his favorite was, “Don’t do as I do, do as I say.” I heard that one all the time for various things like going to church and getting regular haircuts. One year during the Vietnam War my father returned home after 16 months. He was running tanks and ammo to Vietnam via the Philippines. My brother and I had let our hair grow the entire time and we looked like the comic book characters from The Fabulous Furry Freak Brothers. We awoke not knowing he’d arrived while we slept. Coming into the kitchen for breakfast we saw him sitting at the table reading the paper. We were happy to see him and told him so. He was silent. No good morning, no hello, no how are you? He gazed at us over the newspaper and said, “You two are getting haircuts this morning.” That was it.

All those years out at sea left my dad lacking in proper etiquette and manners of polite society. He was a sailor plain and simple. Civilized behavior was for regular citizens, not seamen. They are a rare breed, like truckers and bikers. They all share that lonely world. The Merchant Marines is a crazy mix of military regimen and the carefree lifestyle of sailing. I came very close to following in my father’s footsteps. When I turned 18, I registered for the draft at almost the same time the war ended. My father, against my wishes, got me accepted into the Calhoun MEBA Engineering School, then located in downtown Baltimore. I wanted to attend MICA art college downtown, with my sister and my best friend Michael. My mom also secretly wanted me to attend MICA. She never told my father until it got down to the wire. My mom knew that kind of life would have turned me into someone like my father, more so if there were another war. Luckily, I flunked the physical because of venereal warts. That messed up my entrance to the Merchant Marines and opened the door to the world of art. Art would accept me, warts and all.

On this Father’s Day, I’ll observe my father’s life and times in a new light. He was a complicated man. I forgive and forget his shortcomings as he forgave me my own. I’ll celebrate his sense of humor and love. He could laugh loud, long, and hard watching the Saturday morning cartoons, The Three Stooges, and The Marx Brothers. He loved music too. He listened to Louis Prima, Gene Krupa, and the Big Bands. He loved Sinatra and The Rat Pack. I watched him in awe riding a bike as fast as he could down Arabia Ave. He loved good food, especially raw oysters, steaks, soft crabs, and steamed crabs. On occasion he’d bring home corned beef sandwiches from Attman’s Deli on Lombard St. He made egg nog every year for the holidays that was very strong in alcohol content and delicious. He taught me how to work with my hands. He showed me how to paint and use hand tools. We didn’t get along well until the last years of his life. I’m sure he had a change of heart about the way things are in this world. He came to know the game was rigged and the odds were stacked against us. He realized war was wrong and no longer accepted or agreed with it. He knew politics and politicians were bullshit, that the average person couldn’t win the prize in this country. That life gets in the way of living. We do the best we can. He didn’t want to join the 21st century. In his final days, he thought I was his long lost little brother Louie, who as a child in the 1920s was run over by a milk truck while playing in the alley. He looked at me smiling and said, ”Louie, what are you doing here?” I couldn’t  answer. Finally I said, “It’s me your son, Tommy,” He looked at me again smiling and replied, “I know Louie, I know.” My father left us on New Year’s Eve, 1999. He was a good man in spite of himself and us.