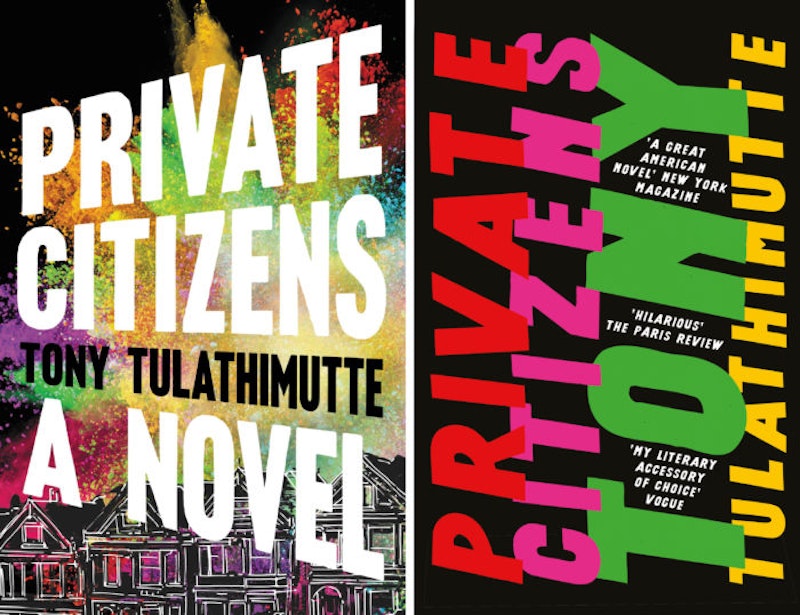 When will the search for the elusive generation-defining “Great Millennial Novel” come to its merciful end? In 10 years, midway through Generation Z? New York Magazine dubbed Tony Tulathimutte’s Private Citizens “the first great millennial novel” more than a year ago upon its release. Someone hasn't paid attention or is looking for something decidedly different than me… it’s such a forced exercise “searching” for the new “voice of a generation.” We know it when we see it. They introduce themselves, they are rarely found and slowly paraded around like grade school science projects. In my mind, a generation-defining work of art has to be innovative in form and of precocious perspective.

Generation X was spoiled, bookended by Bret Easton Ellis’ Less Than Zero in 1985 and David Foster Wallace’s Infinite Jest in 1996. The former was a stark depiction of rich kids doing drugs, each other, and not much else in the burnt plastic hell of Los Angeles at Christmastime. The latter probes much deeper and reaches stupendous heights—Infinite Jest continues to humble and humiliate young writers and anyone that reads it, and even though it dealt with a central concern of Generation X (television addiction and how far it would go), its central premise of a piece of entertainment that is so entertaining that it kills people that cannot take their eyes off it is eerily prescient in an age when “binge-watching” and entire seasons being dumped on Netflix is de rigueur. Wallace was right—I’ve binge-watched a show just once, and long story short, if you sit in the same place staring at a TV for six hours in a row, you’re going to come out of it feeling like a spent junkie.

In fact, the “Great Millennial Novel” arrived four years ago: Tao Lin’s Taipei, a much more obscure and innovative book than Tulathimutte’s Private Citizens. Just to start, Lin’s book took place in the present—Private Citizens is set in the Bay Area in the middle aughts, with interludes back to 2003, 2004. People want this book to be edgy but it’s not, its characters are amusingly rude but we never get to know them because Tulathimutte sprints between four people—Linda, Cory, Henrik, and Will—doing his best to tie together too many pathologies, trends, and personal tics that don’t fit in a book that’s less than 400 pages. He is a talented prose stylist, very lyrical (“A barn owl makes predatory screams outside the open window. Beer yields to wine.”/“He knows she’s out to transgress”/“Everywhere was the country full of emptiness and strangers dealing with infinities of abuse.”), whip-crack clever (“City Lights was a good name for something that obscured stars”/“Her hair Venned interestingly between morning neglect and political statement”/“[Smoking] was still the sexiest way of hating yourself”), and brutally funny (“‘Cheese makes my hands bleed.’”/“Balloons make him wince (‘You just never know about them’)”/“Accidental parents constantly had a telescope trained jealously out into the social universe, were always checking on the latest from Planet Abortion”).

But it’s a safe book, not written for Baby Boomers but obviously very appealing to them: the barely Millennial characters in Private Citizens are bumbling, selfish, awkward, lost, vapid, self-centered, self-destructive, and hopelessly adrift. It’s easy to imagine some Upper West Side schmuck giggling himself to sleep clutching this book with his battle-axe wife by his side, sleeping, blissfully unaware of people like Cory’s insufferable hippie roommate Roopa: “When Cory proposed a common-area cleaning schedule and she’d said, I don’t believe in linear time.” Pop goes the weasel, watch these hopeless twentysomethings flail and fail where we succeeded so easily, and let the myopia harden into cataracts until you’re rigged into an early grave. Tulathimutte’s novel and the praise it’s received reveals what a middle-of-the-road affair it is, enjoyable, not without its problems, but no, this is book does not define anything or anyone. I look forward to whatever Tulathimutte writes next: as I said, he’s a lyrical and sharp writer, unafraid to riff and go on tangents about the culture at large. Those tangents are much more interesting than any of the book’s scarecrow characters. There are gems like this: “And then there was the self—the universal minority.” And this: “Sex should be fun, it should be fucking, not some gloomy I-and-thou shit.”

And then there’s the inexcusable David Foster Wallace cosplay that comes in the middle of the book, a dialogue between two suits in San Francisco who Linda overhears in a cafe. I won’t bother transcribing their conversation: it’s exactly the sort of tortuous and chimerical paralysis of action by unrelenting thought that characterizes so much of Infinite Jest and the rest of Wallace’s writing. Remember the second scene in Infinite Jest, when Ken Erdedy is waiting for a phone call from his dealer, and we’re dragged through the broken glass of his anxiety poisoned mind as he considers, double-considers, double-reverse-contradicts his own instincts and intuition to just call the person, despite fearing that he’d tie up the line at the very moment they called? Tulathimutte shoe-horning his own cultural commentary into the mouths of two unnamed men is so blunt and almost bold, but it shows how afflicted our generation is by Wallace and how his hyper-kinetic, Möbius strip way of writing is so close to the way we think now: hyperlinks, meta-connections, intrusive thought spirals that punish us and put us in bed for weeks at a time.

Private Citizens is a decent book, and I’m only reviewing it now (a year and a half after its release) because my dad gave it to me to get my opinion. If you like Jonathan Franzen but find him too square, and if you loathe Tao Lin but find his subject matter parallels your own life, you might enjoy Private Citizens. There are bizarre anachronisms here and there—Linda worries, in 2003, if Henrik is “catching feelings”—but I can’t help but feel that the book itself is an anachronism, a very prim and proper presentation to the Baby Boomers of the ruling class from a well-dressed, “exemplary” Millennial. This book isn’t challenging, it’s not difficult, and it does nothing new. I resent it representing anything other than “a good read.” Weigh your time and judge for yourself if Private Citizens is even worth it.