Your questions answered about the new generation of Windsors. 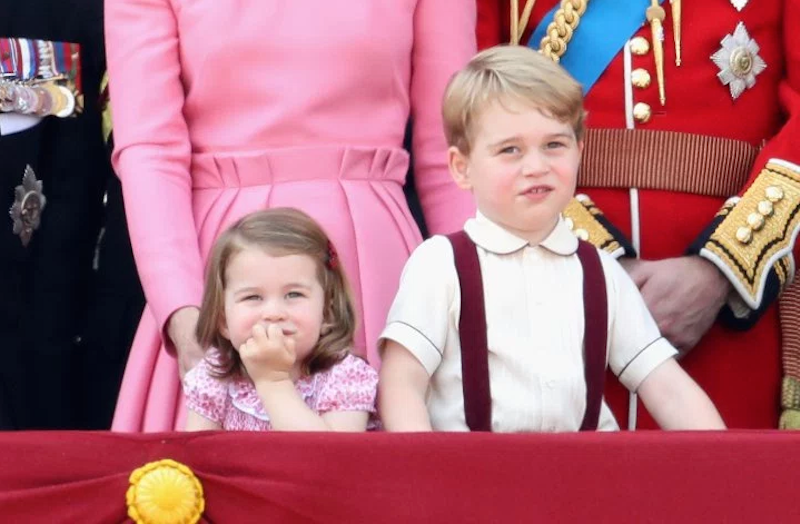 It’s just... wow. They’re, like, the whitest things not to cause snow blindness.

Giant heads. [Gesture with hands cupped, each hand hovering by an ear.] I mean, those kids have got heads. Big.

How old are little George and Charlotte?

[To the girl, suddenly.] Kid, are you joking right now? We know you got cheeks. We can see the cheeks. Find a mouth, kid. You got cheeks and no mouth. You want to live that way?

Have their personalities begun to emerge?

[To the boy.] Also, you—you’re not going to have that hair forever. Enjoy it, okay? Yeah... [digging out photo] Your dad. Nice guy, but pigeons get confused when they fly overhead. The glare frightens them. Your dad was around in 1940, the Luftwaffe would have flown into each other. War’s over right there.

Hey, nothing against him. It’s just he’s shiny, okay? All I’m saying, you’re ever at Spielberg’s place, make sure your dad doesn’t go near the mantelpiece. They’ll stick him up there and he’ll never get down. Stuck there, nothing to do. Still, in a sense, that is the role of today’s monarchy.

Do they have favorite colors? Games?

[Addressing both.] Your mom’s okay. I saw her on The Daily Show, a clip when she was visiting New York, and she was joking around or something. It was a photo-op thing where she was doing some kind of dumb work like regular people, and she was next to regular people, and then her pretend supervisor told her to stop goofing off, I guess, and your mom took it. But when the supervisor had her back turned, your mom shot a glance at the person next to her and the two of them hunched down a little and giggled, but then they got back to work. Seemed a hundred percent natural to me, and I liked her.

The supervisor was a black lady, and that’s something too. May not seem like much, but boy, let me tell you about America. Not that you guys are so great.

How do the children get along?

[Still to the girl.] Man, the clothing. What are you, out on the town with Paddington the Bear? [To the boy.] Hey, this isn’t 1962 and you ain’t John-John. Get some fabric below the knees, you’re embarrassing me. But I can book you a gig with  A.A. Milne—Christopher Robin needs a body double.

Have their educations already been mapped out, or do the parents wish to leave room for decisions later?

[To the boy.] You don’t have a mouth either. The pair of you, cheeks and no mouth. Like you’re at Bed Bath & Beyond and smuggling out the merchandise. Like you got equipped with airbags and the world is nothing but telephone poles. Like... whatever. [Rummages in pocket.] Have a cookie. [Rummages some more. To girl:] You too. [Pause.] Eat, don’t inhale. But, okay, you got mouths. I was worried.