There are five Main Streets and Broadways in New York City. Here are their stories. 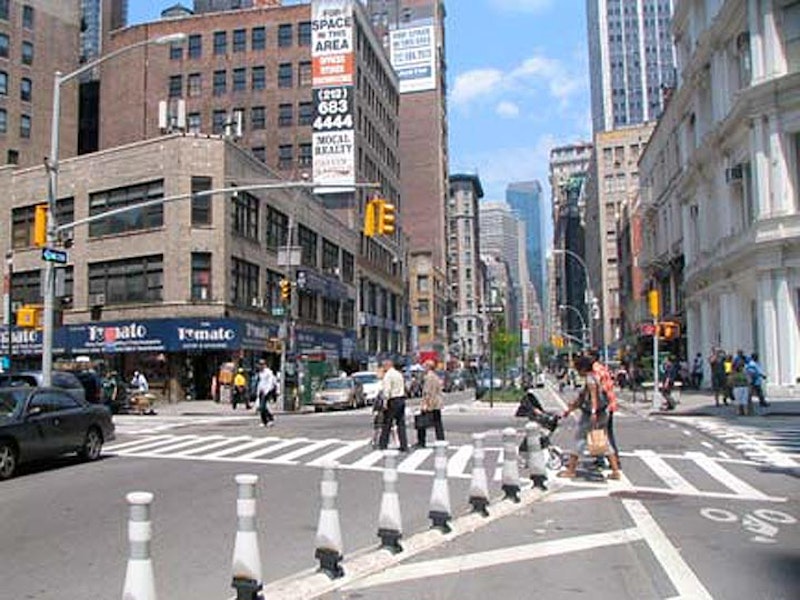 Every NYC borough has a Main Street and a Broadway.

In Manhattan, Broadway runs north from Bowling Green and, under a variety of names, runs north in NY State almost all the way to the Canadian border. Other than a few other aboriginal roads such as the Bowery and St. Nicholas Ave., it’s one of the few roads that predated the colonial era that’s still in use on Manhattan Island; it was used by the Lenape Indians before the Dutch arrived, and was probably in use by the buffalo before the Native-Americans arrived. It is “broad” in a physical sense only when you get north of Columbus Circle—it’s of average width south of that, and called Broadway (Brede-weg) because it was wide in comparison to the narrow cart paths of New Amsterdam that were laid out when the area was first colonized in the 1620s. In the 2000s, traffic engineers have rendered Broadway as no longer a completely uninterrupted road, and it’s a pedestrian plaza for parts of Times Square and Herald Square.

I was most familiar with the stretch of the World’s Greatest Street between Union and Herald Squares in my work life, since I was employed in the area on two occasions: from mid-1988 to late-1991, I was a proofreader and a typesetter at a shop called ANY Phototype, and from 2000-2004 I was a copywriter in the Home Goods department for Macy’s, composing repetitive flyer and newspaper blurbs for mattresses, kitchen implements, bath towels and textiles. I received a thorough knowledge of the location of Macy’s wood escalators, and occasionally escaped onto the roof ledge for some photo ops, before being dragged back in and threatened by the management. 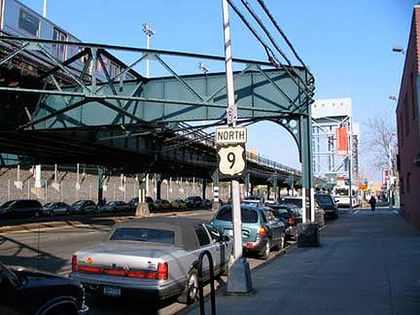 The Bronx’s Broadway is an extension of Manhattan’s Broadway. The name is famous worldwide—I don’t know how many of the world’s cities have a Broadway; I know London has Fulham Broadway.

The Broadway that begins with Number 1, the International Merchant Marine Building at Bowling Green, has been extended far upstate by a gradual process of street re-namings. The route upstate more or less traces the path of the Albany Post Rd., and by extension. It’s called Broadway continuously all the way north to Phelps Way (State Route 117) in Sleepy Hollow (North Tarrytown) whereupon the route assumes the name Albany Post Rd. Route 9 assumes the name Broadway briefly once again in upstate Red Hook and again in Saratoga Springs. Route 9 completes its northern progress at a dead end along the Adirondack Northway (Interstate 87) north of the town of Champlain just south of the Canadian border.

As for Broadway’s stretch in the Bronx, it’s covered by the elevated IRT #1 train from the Harlem River north to W. 242nd St. It passes such notable locales as the Riverdale Diner; Gaelic Park, a soccer pitch favored by local schools; Van Cortlandt Park, whose spacious fields are buzzing with runners, footballers, and athletes in non-COVID times; and Lloyd’s Carrot Cake. 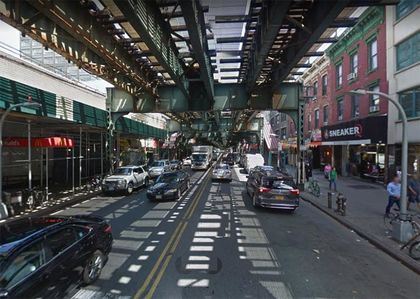 In Brooklyn, Broadway runs from Kent Ave. at the East River in Williamsburg southeast to Jamaica Ave. at Fulton St. An elevated train carrying the J line runs over it for almost its entire length, and at Jamaica Ave., there’s an elevated tangle of train routes that consists of routes bound for Jamaica, but also Canarsie; there’re disused elevated tracks formerly associated with a long-defunct line over Fulton St. South of Flushing Ave., Broadway separates two different street grids as well as the neighborhoods of Bedford-Stuyvesant and Bushwick.

Early maps from the 1820s and 1830s show that in Williamsburg(h) Broadway was originally a part of South 6th and 7th Sts. By the 1870s Broadway had extended northwest from the Bushwick-Bedford Stuyvesant border and assumed the streets’ route. Williamsburg, which originally had an “h” at the end—dropped in 1855—was originally a part of neighboring Bushwick but was incorporated as a village in 1827 and graduated to city status by the 1850s. The first colonial roads through the area followed an Indian trail called Kykuit, or Kickout (“lookout”), which delineated a rough circle that is today’s Division Ave., Kent Ave., Metropolitan Ave. and Keap St. Brooklyn annexed Williamsburg in 1855 and in turn, Brooklyn was itself captured by New York City in 1898. 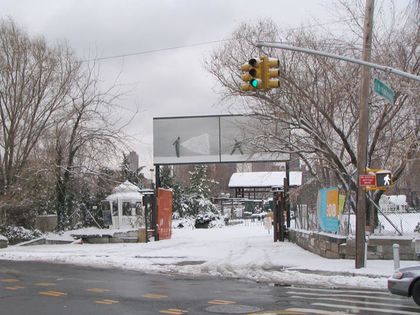 In Queens, Broadway begins in Ravenswood at the East River edge, and plunges southeast into the heart of Elmhurst, indeed the center of the original town of Newtown (Middleburgh) first settled by Dutch colonials in 1652 (after an original settlement 10 years earlier in Maspeth had foundered after Indian attacks). Queens’ Broadway, which attained its present length only in the early-20th century, is an amalgam of a number of roads: Broadway in Ravenswood ran southeast to the now-de-mapped Ridge Rd. near Newtown Rd.; and the southern part between Woodside Ave. and Queens Blvd. is the eastern section of the colonial-era Hellgate Ferry Rd., which connected Elmhurst and the East River; twisting Woodside Ave. follows most of its route today.

I’m unsure when these two roads were joined to create the present-day Queens Broadway. Maps from the 1910s and 1920s show a completed Broadway, but that may be a figment of mapmakers’ imaginations (they often show maps the way city agencies say the street will eventually appear). Meanwhile, historian Vincent Seyfried (the unsung master chronicler of Queens whose work inspires every borough and city historian) maintains, in Old Queens, NY in Early Photographs, that Broadway was only connected with Long Island City and Elmhurst when the IND subway was opened in 1933. We can call Queens’ Broadway the youngest of all the boroughs’ Broadways.

In the above photo, Broadway begins at Vernon Blvd. at 11th St. (known as simply “Boulevard” in the pre-street numbering days) and here we find the entrance to Socrates Sculpture Park. Broadway continues southeast past the Bellaire Diner at 21st St.; one of my old haunts, the former headquarters of the Greater Astoria Historical Society at 36th St.; and the heart of downtown former Newtown, today’s Elmhurst, as Queens Blvd. is approached, passing some of Queens’ oldest buildings such as St. James Church (built in 1734) at 51st Ave. 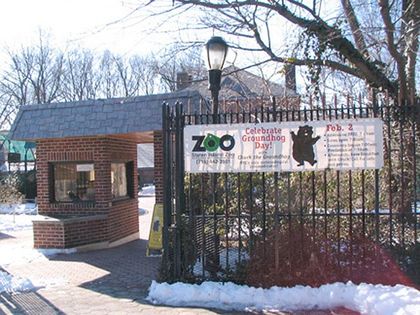 Staten Island’s Broadway is one of the main north-south streets of West New Brighton, running from Clove Rd. at St. Peter’s Cemetery generally north to Richmond Terrace. I say “surviving” because Staten Island has had a number of Broadways over the years: there have also been Broadways in Willowbrook, Huguenot Park, Port Richmond, Rosebank and Tottenville. Hundreds of Staten Island streets were renamed between about 1910 and 1930—likely to avoid duplication between neighborhoods after the borough was consolidated into NYC in 1898 and its former towns dissolved. West New Brighton’s Broadway is the sole survivor of Staten Island’s Broadways.

West New Brighton, or West Brighton, is in north central Staten Island in the area generally northeast of Clove Lakes Park and just northwest of Silver Lake Park. It’s named for its position west of New Brighton along Staten Island’s north shore that was, in turn, named for Brighton, a seaside resort town in Britain. It was first settled in the mid-19th century and was originally largely populated by Irish and Italian immigrants, many of whom worked along the dry docks and ship repair facilities along Richmond Terrace and the Kill Van Kull.

The Staten Island Zoo, at 614 Broadway, opened in 1936 on the former estate of Nathan Barrett (who founded the New-York Dyeing and Printing Establishment, the first factory in the area at Broadway and Richmond terrace in the early-1800s) with a special emphasis on reptiles, and today it remains New York City’s premier exhibit and research space for the cold-blooded creatures, with its rattlesnake collection being one of the country’s biggest. Its African Savannah collection features animals endemic to the grasslands of middle Africa: antelopes, leopards and mandrills.

New York City’s premier rodent weather prognosticator, Staten Island Chuck, predicts whether winter will last much longer at the Zoo every February 2nd. This year, Chuck predicted an early spring, and we received two feet of snow from four separate storms during the rest of the month.