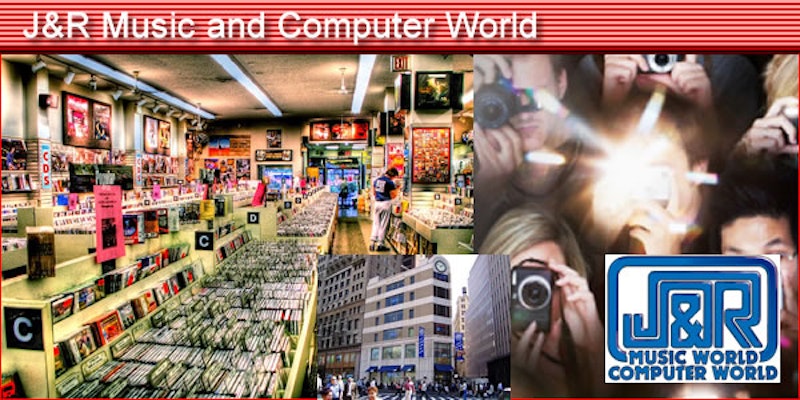 There was no better time for browsing, window shopping, and gaping maw consumption of all kinds than the 1990s in New York City, the capital of the world and the center of the universe. Most of my early memories are variations on wandering around the same dozen or so book, music, and video stores: World of Video, St. Mark’s Comics, Forbidden Planet, Kim’s, Bleecker Street Records, Virgin Megastore (Union Square was better than Times Square), and J&R Superstore, a complex now closed that once held an entire city block on Park Row. I was able to go there one last time in August 2011, and it was exactly as I remembered: fluorescent overexposure over boxes and boxes of wholesale CD’s.

They closed permanently shortly thereafter, but before my family moved to Baltimore in June 2003, we kept to the circuit of stores we haunted for the first decade of my life. Most of them were still around as we made a visit here and there, adding a few new stops, like Dom Fernow’s Hospital Productions (in the basement of a used reggae record store) or, for my brother, the Kinekunia bookstore by Washington Square Park that had a formidable inventory of new manga. As the 2000s wore on, stores dropped off one by one, and there was no more browsing in the basement of J&R, or under the ringed eyes of surly employees at both Kim’s and Shakespeare Books. Now, with Beyond Video in Baltimore thriving, I can scan the sleeves and cases and covers once again.

But there was one incident that stuck out: sometime in the summer of 2002, around when The End of Evangelion was finally released on DVD, I got fingered by a particularly nasty security guard in the J&R basement. This place was wholesale, with new and used mixed in together freely, and picking up a copy of what I think was a Vin Diesel movie (perhaps xXx?), I noticed it had no shrink wrap, and the top sticker was slit. I opened the case out of curiosity, then put it back, and continued browsing. Then this guy appeared and held me for 15 minutes interrogating me about guardians, parents, what I was doing, stealing, making me feel like a criminal.

Naturally, after stammering out that my dad and brother were somewhere in the store, the guy took me by the arm to him, as if turning in a fugitive. My dad basically laughed it off, and despite this asshole’s persistence, nothing happened to me, because I did nothing. But he was bored and angry. It really was nothing, and as soon as my dad appeared the security guard became a bit less SS, but I was in a fog the rest of the day. I remember walking back home, in a blur of guilt, when my dad and brother commented on how weird that whole thing was, not mad, just nonplussed. It was a bizarre feeling, and one that would roar back into my mind whenever I’d be accused of something I either did or didn’t do (“obscene” photography exhibits in high school, an attempt by a vigilante cop to bust three teenagers in Catonsville at three in the morning for absolutely nothing, female teachers and administrators who were either childless or so maladjusted that they felt they had to act as my surrogate mother in place of what they saw as a sarcastic disruptor without anyone disciplining him at home).

I wasn’t raised Catholic, but my dad was, and the enlarged super-ego of all Catholics was passed down to me. Thurston Moore called it a “Catholic Block”—I’d done nothing wrong, never intended to shoplift this DVD (was it a Jason Statham movie? Maybe the first Fast and Furious? I was just browsing!), but this piece of shit made me feel like a convict. A similar incident of random punishment and humiliation came just three years later in middle school, when, on the second day of class, my science teacher asked us all if we had three-hole-punched the syllabus she gave us the previous day, and if we’d properly installed it in our binders.

I didn’t, I wasn’t alone, but she, either sensing that I would be a “problem” or through teacher lounge talk, decided to make an example of me. Yes, this bitch (I’ll keep her nameless for now) called me to the head of the class so I could present my syllabus, one with zero holes punched in. She held it up high as I stood before my classmates, all of us confused. And then she turned to me and tore the sheet in half, never breaking eye contact: “This is what I think of this.” This being… binder organization. This woman is still teaching by the way, and I hope I see her before the bone cancer I wished upon her takes her down slowly and painfully. A long life of loneliness and suffering would be good for her, I think. She could perhaps have time to reflect on all of the children she humiliated and traumatized in her day.

She called me in at the end of that day to essentially spell out that I was a made an example for the class. Oh well: everyone else in my class was horrified by what she did, and if I were more petty and as dumb as she thought I was, I might’ve brought up this incident to the school itself. I mean really, this was something teachers get fired for now, a story that might be covered on a slow news day. By not reacting, by expressing indifference, you not only neutralize your attackers or abusers, but you freak them out. It’s a movie cliché, but think of the guy with the gun to his head who dares the other to “just shoot me.” They rarely do.

Bullies have no guts. That security guard knew he had nothing, but he kept holding me like a guilty man (or boy). Same with this cunt science teacher: the realities of their lives are so blown out, pathetic, and sad, that denying them the pleasure of the victim’s tears or pleas really is the sweetest tonic, because you quickly realize that this sadism is what they live for, or, what they’ve settled for in their otherwise unfulfilling and enervating jobs. I never shoplifted, but I wish I did just to spite that fuck, and believe you me, Madam Molecule’s prisoner routine certainly had no effect on my organizational skills.

Yes, I was the Josef K. of Park Row, and then, just a few years later, after another brief visit to Manhattan and many of the stores mentioned above, I was Dana Andrews in The Ox-Bow Incident, except instead of being lynched by an angry mob, I was thrown into a bizarre pseudo psychosexual Freudian humiliation exercise by a woman who probably, as I encountered all too often, realized how quickly the clock was ticking and how much they resented me and others for being children they couldn’t mother, train, and control. Luckily she did not give me the knife or the bomb like Josef K. Maybe I'll send her a fruit basket, with a torn-up note.