The Thrill of Same-Sex Toilets, the Horror of Aaron Boone 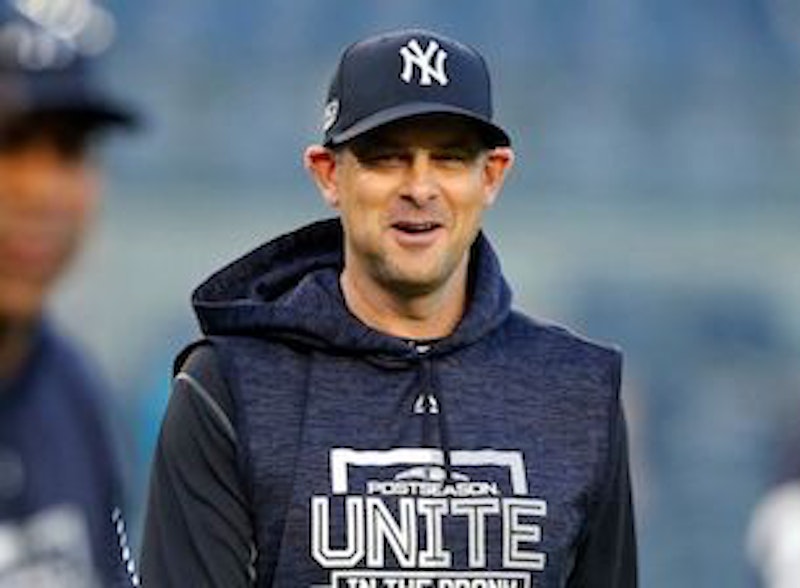 After my last stint in the hospital, one that yielded another inconclusive verdict (I’ll require more testing) I was spirited away to the Indiana hill country to visit Daughter at the regionally renowned boarding school to which she has, as I’ve written, won a scholarship.

I was grateful for this diversion. When you’re facing unsettling medical news, it’s nice to be exposed to the energy of—and immersed in the scent of—youth.

Ah, that scent of youth, and particularly of youth at school. It’s a smell compounded of the sweat of tender bodies after athletic exertion, the mustiness of library stalls, the primal smell of menstrual effluvia (I’m thinking here of the girls' boarding corridor), the tang of well-pumped semen (I’m thinking here, needless to say, of the boys' corridor). This multifarious scent is the scent of Life, LIFE in all its seething, soiled beauty.

Exposure to it did me good after my trials in the hospital. Our Lord is generous.

I admit that my convictions as concern the immorality of single-sex bathrooms were reinforced at Daughter’s school. After entering a “non-denominational” restroom in the student center during the afternoon of our second day at the school, I closed myself into a stall and unzipped preparatory to relieving myself. It was at that exact moment that I sensed, in the stall next to mine, a female presence. (The voice “next door” was absently breathing out a scrap of a popular song—and was obviously female.)

At first I froze, conscious of the perversity of the moment: of this bestial and anti-human transgression of the laws of our Christian anthropology, based as it is in a rigid distinction between Adam and his vassal and helpmeet, Eve.

But it was too late. As I “downloaded” the thistle tea I’d been sipping from my thermos all day, I was conscious of a thrill—yes, a delicious menthol chill—playing along my hips, my thighs, even my perineum. This was, of course, that dangerous pleasure that comes from surrender to the tyranny of the corporeal.

But, finishing my business fast before wiping the tip of my member with a square of toilet tissue and pulling my briefs and khaki shorts up to my navel, I checked myself, distracting myself from the license of the flesh by repeating Saint Vsevolod of Kharkov’s Panegyric for the Mortification of the Glans: “Oh, Lord, steel as we lacerate our salty…”

Then, after washing my hands thoroughly, I beat a fast exit from that perverse restroom into the cold light of a Hoosier October, my sandals slapping the floor. Daughter, by the way, has chopped her hair very short, no doubt in imitation of St. Lyudmila of Krasnoyarsk. I’ll have more to say about her, at length, in future diaries.

The Red Sox have defeated the Yankees in the American League Divisional Series. I’m not a pro baseball fan—I prefer the game at the lower levels, before the supple bodies of the players have been rendered coarse by weight-training. Yet I did watch the last game of the series while Mother, out in the yard, struggled with our faulty sump pump, and was struck by the surname of the Yankees’ manager: Boone.

Boone? Was he by any chance related to the Bloomington Boones, several of whom I knew as a boy?

Wikipedia indicated that it was even more interesting than that. Aaron Boone is a descendant of former American hero Daniel Boone himself.

I found myself overcome by a wave of melancholia in the face of this fact. Yes, I know that sports lend themselves to cheap metaphor. Yet there I was, sobbing as the Yankees lost. This wasn’t because I care about the Yankees. It was because—absurdly, I know—it struck me as symbolic that a BOONE, an Old American descended from a man once considered an American hero (and now no doubt considered something like a Nazi), should lose.

Yes. Lose, lose, lose—and in the widest sense of the word, no?

Haven’t we indigenous white Americans, we descendants of this country’s settlers, we who comprise the posterity of the 18th and 19th century Boones and their ilk, we whose surnames end in consonants (well, Boone’s doesn’t, technically, but it’s a silent “e”)—haven’t we lost everything? Don’t we see ourselves marginalized in our own country, pushed out of—“replaced” in, as the admittedly vulgar bully-boys of the “alt right” put it—our own country? Don’t we see the statues to our ancestors every day torn down and defaced and mocked? Our traditions and folkways vilified? Or heritage defamed?

Oh Aaron Boone! Do you not find it hard—and meaningful—that you have fallen in defeat at the snakeskin pointy-toed feet of an accented and Caribbean immigrant CORA?