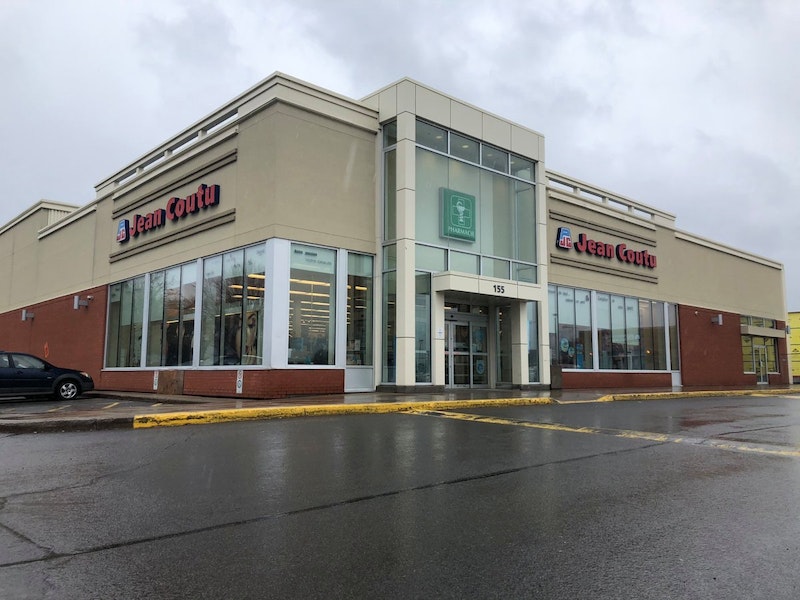 The government said go to the Pharmaprix at 677 Sainte-Catherine Street West and get vaccinated. But at that address there’s no Pharmaprix; instead there’s a Jean-Coutu, which is a different chain. I found this out via Google, after which I decided to check things out up close. The scoop: upon arrival at Sainte-Catherine Street, one finds nothing marked 677; that door doesn’t exist. You must hunt an entrance marked 705. That’s where you go in, and after five minutes of winding and turning and a change in level, you find your Jean-Coutu staring at you with its glass face and becalmed checkout girl.

Not a Pharmaprix, a Jean-Coutu, and on the street you don’t look for 677, you look for 705; look for 677 and you wind up lost. When the nervous girl on the government line reads you your vaccine appointment and its alleged location, you’re getting a rough draft that must be refined by an hour or so of you traversing the premises because no one else could get their brainwaves in order. To sum up. You were told go to the Pharmaprix at 677 Sainte-Catherine Street West. But no, you should read that as the Jean-Coutu at 705, and shriveled Jesus, they’re trying to destroy us.

What of this winding and turning? This change of level? Your Jean-Coutu is located inside a mall, a mall that towers; there are levels under the earth, stories piled in the sky. This mall’s name is the Eaton Centre and its ceiling dwells high over the heads of its inmates. A minute and a half of walking is needed to turn a wrong corner, another five minutes to unturn it and find the right one.

Upon entering the Centre you encounter a space built along the lines of an acre but with signs and white pillars that cut it up and with successive store fronts that feature clothes nobody would want to see. Help exists as the occasional gray panel and screen bolted to a wall, or the occasional white-sleeved, blue-masked security guard laboring their way toward some distant goal as the arcades stretch overhead. Flag down two of these people and ask what the address is. “It is Eaton Centre,” they say, natives in a third-season Star Trek. Ask for a street number. They say they never heard of the place having one.

But the gray screen can find you a pharmacy. You press the screen; it doesn’t respond. Press it more lightly and still no. Press it more heavily; no. Press it more heavily than that… no. Your heel leaves the earth and your weight shifts forward. The screen inches back from its casing; it bends. And now, yes, a P appears in the slot. Encouraged, you try for H. But no: with your thumb grinding and the screen bending once more, you get nothing. You rest, you reflect. You touch thumb to screen, and from here on light and firm do just fine. After its bruising, the screen complies and the letters march across the slot.

The screen lets you know there’s but one pharmacy here, a Jean-Coutu. Helpfully, to point out where this pharmacy is, the screen flips the floorplan of the Centre. The plan floats there, and a big arrow charges off to the right. This arrow has a label that says something about finding a place you’re not interested in. A smaller arrow, a modest arrow, twists off to the left and up, along the recesses of the floorplan. It finishes… where? Somewhere to the left and up of where you are now. The circle at the arrow’s end says this is the pharmacy. You go off to find that spot.

As noted, in Eaton Centre turning a corner takes a minute and a half. It takes longer than that to get anywhere to the left and up of where you are now, let alone to get as far left and as far up as the screen appears to demand. You’re embarked on a trek, one that lists in a certain direction but has no sure place to go. Along the way, you have to crane and peer in search of any sign that the Jean-Coutu might exist and have a definite location; given the sightlines and distances involved, the craning and peering often requires extra minutes of footwork. At last a security guard comes upon you in the food court, where you’re following its perimeter and verifying that this isn’t a place where a pharmacy would be. The security guard tells you that the Jean-Couto is in McGill Metro, this place being a nearby subway platform with an accompanying line-up of business establishments. Getting from the food court to this subway station is a mere matter of… Oh God. But find it and you have found your place. This is 677: a storefront buried alongside a subway track, no street anyplace around. This is what the government has in mind when it sets you on its treasure hunt for 677 Sainte-Catherine Street West. Bastards. The bastards!

All right, from the food court to the Jean-Coutu takes you 20 minutes or so, what with trial and error and retracing. After which figuring out a route from the Jean-Coutu to the street and writing it down also takes 20 minutes or so, with you going back and forth along the route and scribbling landmarks in your notebook, storefront by storefront. Ink strokes every which way because, face it, you’re pissed. (Now here they are, the crucial directions: In at 705 St-C W near c/ University go straight past TimeOut Market Dynamite escalator past RW & Co sign w/ Decathlon etc down esc at end of hall round end to black pylon with arrow McG Met walk down hallway, there’s J-C next to subway door.)

A nice young fellow in the pharmacy takes your health card and verifies, yes, you have an appointment there Monday, 11:10 a.m. Even though it’s a Jean-Coutu, not a Pharmaprix. Checking took seven minutes. During this time the young man stared at the screen, concerned, while a woman stared at it too, and a shaven-headed man stared at the two of them. The shaven-headed man was waiting to ask the woman something, the woman was waiting for the computer to come unstuck, the young man was waiting for her to unstick it. Then the tableau broke and you learned your good news.

That’s all it took.