To persuade them, you'll have to approach them with more respect. 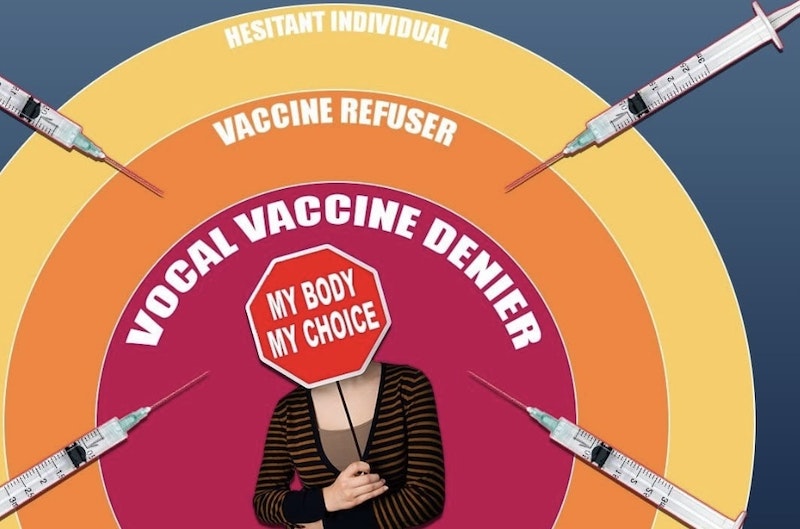 I got the COVID vaccine (Pfizer version) the minute I could, but we’d better respect those who choose not to. I don't think, for example, that private corporations and colleges should require vaccination as a condition of employment or attendance, and universal requirements imposed by local or state governments are liable to backfire badly. Anti-vaxxers or the “vaccine hesitant” aren't necessarily irrational. And the people pushing vaccination relentlessly in all media need to take seriously the fact that each person needs to get some sort of say about whether you puncture their skin.

The New York Times, in a thoughtful article on vaccine hesitancy in eastern Tennessee by Jan Hoffman, gave a synopsis of the motivations of the rural resistant. "The most common reason for their apprehension is fear—that the vaccine was developed in haste, that long-term side effects are unknown. Their decisions are also entangled in a web of views about bodily autonomy, science and authority, plus a powerful, regional, somewhat romanticized self-image: We don't like outsiders messing in our business." The region in which such views are current might be more or less all of rural America: this is a fair representation of what I've heard in small-town Pennsylvania.

These aren’t bad reasons, unless they're driven by rumors, also reported in the Times piece, such as that the vaccines were made from aborted baby parts or that the government is using vaccinations to inject microchips. But let's take these bits one at a time.

The vaccines were developed in haste. In fact, a whole new family of vaccines, never before widely used (mRNA vaccines) was developed in haste. The long-term side effects are unknown. Correct? These people are right about that. I’ve heard experts, including knowledgeable people of my acquaintance, say that the nature of the new vaccines makes long-term side effects extremely unlikely. I'm not in a position to assess the evidence for that independently. But I'll say this: scientists thought the same about asbestos, for example, or radiation, and "It seems unlikely" is a lot different than "has been used safely for decades."

Each person ought to be allowed to balance the real, if amorphous, risks of vaccination against their own situation. Myself, I wanted to see my 95-year-old mother and my Millennial kids with less worry. I wanted to teach college classes face to face. I assessed myself at 62 with a variety of health glitches as likely to become seriously ill if I contracted COVID. I think my decision to get immunized is rational. But I'm a lot less certain than Leana Wen or Anthony Fauci appears to be that I'm right or that they're right about this.

Wen, who is rolling CNN and The Washington Post all the time on vaccine hesitancy, appeared Saturday on Michael Smerconish's show. He read her those sentences from the Times describing the reasons for rural resistance. But she didn't spend a moment responding to them; they both seemed to take for granted that these were bad reasons. She moved immediately to her preferred propaganda strategy: show happy maskless vaccinated people hugging on television, while restricting participation in various events and institutions to people with vaccine cards. Show people all the things they can do if they've been immunized; enforce all the things they can't do if not.

Maybe she should’ve made as clear an argument as possible, using whatever actual evidence can be gathered, about the likelihood of long-term side effects. And maybe Wen (and she's definitely not the worst here) should also take seriously the moral objection to any sort of coerced vaccination as a violation of bodily autonomy. If "the long-term side effects are unknown" is a true factual statement, the idea of bodily autonomy is a fundamental ethical dimension for assessing any program or policy, particularly in public health.

All over the world for more than a century, public health programs that violate the bodily autonomy of particular persons have been applied to horrific effect. The Tuskegee syphilis experiments are an egregious example. Much more pervasive have been approaches like forced sterilization for people deemed unworthy to reproduce, or China's one-child policy, or, more pervasively yet, abortion bans and the war on drugs. All of these are cases where someone declares that you’re not in charge of your own body, that your body is at their disposal, without consulting you or soliciting your consent. They're telling you what you can’t ingest, who or what can enter or emerge from you body for what purpose.

Even if programs like this had all the good effects they were intended to, they’d be morally unjustifiable. They were premonitions of slavery, for the condition of slavery is best characterized as one in which other people have control of your body, in which you have no "bodily autonomy." It's possible to slip into slavery bit by bit, and if rural Americans are still worried about who claims authority over their bodies, are still jealous of their own autonomy, still consider themselves to be the owners of their bodies, I don't think that's irrational either.

But, you may be saying, when individual autonomy threatens everyone's health, the collective is more important. But this presumes that you're right and they're wrong. And if you've been vaccinated, you're apparently pretty well-defended against infection, even if some people aren't. The threat that the unvaccinated presents to the vaccinated seems at this point pretty minimal.

So I'd pull back on the pounding propaganda, forego the mandates, and work on easy access to vaccines and gentle persuasion. If you want to bring people along you might, paradoxically, have to stop being so certain that you're right and that they're ignorant. That's not liable to persuade anyone of anything.