My Faith in the Constitution

I'm not a criminal. 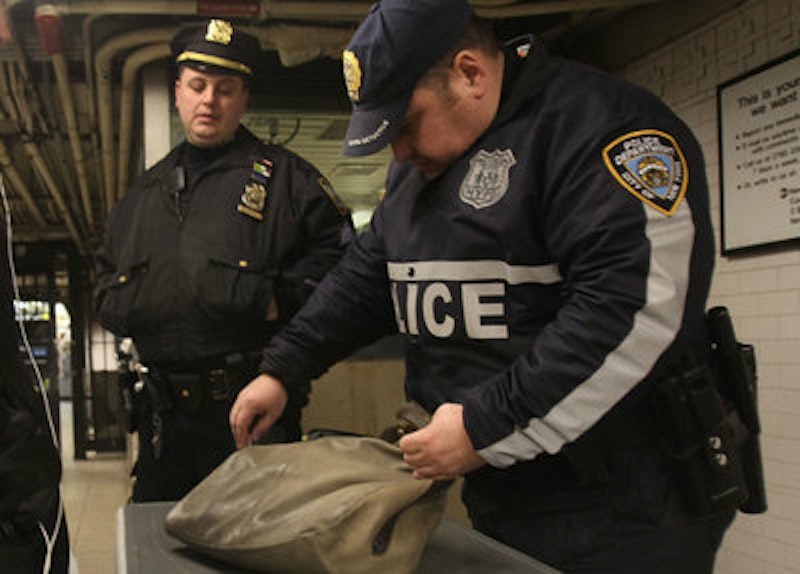 The Fourth Amendment to the Constitution of the United States, part of the Bill of Rights drafted by James Madison, states: “The right of the people to be secure in their persons, houses, papers, and effects, against unreasonable searches and seizures, shall not be violated, and no Warrants shall issue, but upon probable cause, supported by Oath or affirmation, and particularly describing the place to be searched, and the persons or things to be seized.”

My faith in the Constitution led me to be arrested on March 10, 2003. So far, this has been the only time the cops have slapped the cuffs on my wrists.

I’d worked out at the New York Sports Club on 96th St. and Broadway. I was tired and didn’t feel well. I usually walked home from the gym but for once I wanted to take the train to the stop nearest our apartment. So I entered the subway. There, several of New York’s Finest stopped me, with all possible courtesy, and asked to search my gym bag.

I found this unacceptable. I’m not a criminal. They had no warrant.

The regulations governing the subways had been quietly amended by the Metropolitan Transportation Authority to permit the police to search riders and, if the search was refused, bar a rider from boarding the subway. In effect, they’d unilaterally changed the terms of the contract created when I had purchased my MetroCard, and without my consent. I politely declined to be searched, paid my fare, and entered the subway. Some 30 feet later, the officers laid hands on me.

I didn’t resist. I knew they were doing their jobs. They led me back to the table at which they were stopping and searching riders. I politely objected, suggesting that what they were doing was wrong, the Fourth Amendment forbade it, and I should be released.

While they were examining the somewhat fragrant contents of my gym bag, I observed several males who appeared to be of Near Eastern origin pass through the turnstiles while carrying huge bags of stuff. The officers did not notice this because they were dealing with me.

Then they led me to a patrol car and drove to their stationhouse. Once there, the officers permitted me to telephone Mimi, my wife. I explained what had happened, asked her not to worry, and said I’d be home as soon as possible. I spent some hours in a cell. From time to time, other persons who’d been arrested sat there with me. One asked, “What are you in for? Drugs?” I explained. Then, being a lawyer, and as his counsel had not yet arrived, I offered free advice: despite whatever inducements the police might offer him to talk, keep his mouth shut until his lawyer was present.

Around three a.m., the police having processed my paperwork, I was released to go home with a date in Criminal Court, New York County. Mimi was waiting for me when I got home. She thought that what I’d done was heroic. I’ve had second thoughts.

Anyway, as I was then employed as a lawyer by the New York City Department of Correction, I telephoned the agency to advise them of my arrest. I went to work the next morning. My supervisors, the assistant commissioner and the deputy commissioner, wanted to see me.

Both of them were, as they say, standup guys. My deputy commissioner was quoted to me as saying when he’d learned of my arrest, “I am sure Bill addressed the arresting officers as ‘Sir.’” Indeed, I had.

They gave me the rest of the day off. They also suggested that I make this matter go away as soon as possible.

The District Attorney’s Office, then under Robert Morgenthau, seemed more interested in making my life difficult than I’d expected. So, on the advice of my long-time mentor, Maggi Peyton of the Manhattan Borough President’s office, I retained Nicole Bellina, Esq., a tough Brooklyn criminal defense lawyer with a firm then known as Stoll & Glickman, now known as Stoll, Glickman & Bellina. From her performance on my behalf, I understand why the firm’s name has changed.

There’s nothing like observing Criminal Court to increase one’s understanding of how shabbily the criminal justice system treats people. I appeared and returned some six times. Imagine having to take that much time off from work. For me as a civil servant, that was a lot of vacation time. For others, that means losing a job.

Nicole appeared beforehand every time, thoroughly professional, prepared, candid, and reassuring. One odd thing happened. The assistant district attorneys assigned at each appearance had insisted that I perform community service. This suggested to me that I’d done something dishonorable and I declined their offers.

My deputy commissioner had been an assistant district attorney before going to the Department of Correction. One morning, Nicole asked whether I’d asked for a telephone call to be made on my behalf. I hadn’t. Nonetheless, she said that, while she believed me, the District Attorney’s office was now willing to accept my plea to a violation—not a crime—without community service. I agreed to take the plea so I could make this go away.

So I appeared for the last time in Criminal Court. Nicole and I stood up together as the judge presiding recited the necessary ritual language and I pled guilty to a violation. Her Honor sentenced me to time served, i.e., the hours I had spent in the cell, and heavily emphasized that I was pleading to a violation—not a crime. As of that time, I understood that I was one of only six persons who’d been arrested for not submitting to the search of their bags.

For years after the attack, I dreamed of the World Trade Center as I’d known it. Sometimes I was rushing through the Concourse toward the PATH train—the old Hudson Tubes—for a hearing in the Newark bankruptcy court. Or I was walking to the airline counters in the elevator lobby to purchase tickets. Each time, the moment came when I realized that these things were no more—they were only memories—and I awakened in sorrow.

Tuesday, September 11, 2001 was a lovely, cloudless day with an utterly clear blue sky. It was Primary Day. As the law firm at which I’d been working had laid me off in August, I was working as a clerk at a polling site for the Board of Elections, good for $150 a day. Needs must when the devil drives.

The polling site was in Middle School 247, at 32 West 92nd St. Around nine a.m., I overheard a whisper of something having happened and a stir about the room. I excused myself, walked to a pay telephone—I didn’t yet carry a cellular—and called Mimi, who told me that planes had crashed into the World Trade Center and that the buildings had fallen down. Mimi’s a journalist—she doesn’t over-dramatize these things—and so I replied, “Okay,” and suggested that she come to the polling site because I didn’t think the election would continue.

By the time I returned to my table, I noticed a number of poll workers—mothers with children—had, understandably, abandoned their posts to get their kids. The Democratic polling site coordinator, a guy paid $185 per day to oversee the operation, announced that the election had been cancelled. Mimi arrived, and I taught her how to close a Shoup lever voting machine, the 840-pound mechanical monsters in use from the 1960s and still occasionally restored to the polling places. Between us, we closed about a dozen of them. We then left the building. When we stepped outside, the Republican polling site coordinator insisted that we stay until the police came to pick up the machines. I replied, “Miss, if the World Trade Center has fallen down, I don’t think the cops are coming for a long time. Good morning.” Mimi, whose ancestors came from Vilna, Lithuania, thinking of the Cossacks—the Czar’s cops, enforcers, and hit men—murmured, “Never tell a Jew to wait for the police.”

Then we left, picked up some groceries, some water, a new TV (ours had died the day before), and some booze. All became handy within the next hour.

The Board of Elections gave me full pay for a very short day.

I remember the silent sky over Central Park—not a plane overhead—suddenly filled with the scream of jet fighters, a sound I hadn’t heard since childhood. We had dinner that night with my in-laws, and I leaned out their living room window to look south, where a pillar of fire rose by night.

Some friends’ stories are gallant. Sergeant Thomas “Tiger” Reilly donned his Guard uniform and, as the subways were closed and most buses unavailable, walked from his apartment on E. 30th St. to what had been the World Trade Center. He spent three weeks at Ground Zero, searching for survivors.

Major Bruce Laue put his uniform on and a police cruiser took him to the Seventh Regiment Armory at 643 Park Ave. between 66th and 67th Sts., where he spent the next two weeks with another friend, Colonel Ivan Lantzky. Working around the clock, they led troops in performing traffic duties so the 19th Precinct’s officers might do more important things. They saw that all posts were covered and the soldiers fed, showered, and given a place to sleep after their tours of duty. Colonel Lantzky and two MPs arrested a Swiss couple whom they had observed filming troop movements in and out of the Armory; the two were on the FBI Watch List; and so they were handed over to the 19th Precinct, which called in the FBI.

Both received the New York State Defense of Liberty Medal for their service. Colonel Lantzky, a fine soldier, has since, regrettably, joined the majority. Major Laue, now Lieutenant Colonel Laue, is still with us.

Sometime later, both were rebuked by their acting commander for having acted without orders. He had been unavailable during the crisis, apparently unable to walk across any of the East River bridges to join his command. I recall that numerous firefighters ran over bridges and through tunnels to report for duty on 9/11.

Maggi Peyton spent two weeks serving food and water to the rescue teams at Ground Zero. Some of us believe her death from cancer late last year came from exposure to the fumes rising from the ruins. Former New Jersey Governor Christie Whitman, then President George W. Bush’s administrator of the Environmental Protection Agency, insisted that the fumes were not hazardous to human life. Later Ms. Whitman was shown by the EPA’s inspector general to have been, at the very least, seriously mistaken.

A month or two later, I received my alumni newsletters from Manhattan College and Fordham University School of Law. Each listed numerous alumni who had died in the towers. Some had been classmates; three had been friends.