God and Other Friends

Make sure you don’t piss him off. 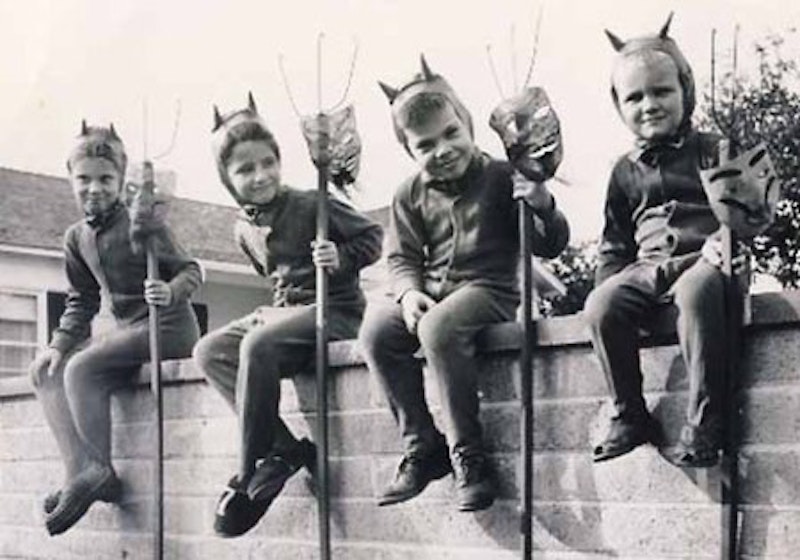 When I was small, god loomed large. God was everywhere, watching and waiting. I wondered what god looked like. Like Charlton Heston playing Moses? Like The Smith Brothers cough drop guys? Perhaps god’s face was like the yellow smiley face on shopping bags found everywhere, telling all to ”have a nice day.” God was like a divine Santa Claus who knows when you’ve been bad or good. No toys for you, bad child. A crooked stick is all you get. Or the classic story of god as an old man with a long white beard sitting on a cloud in some kind of heaven. He could shoot lightning from his fingertips and strike you dead on the spot if you disobeyed or displeased him. That was the story everyone bought. John Lennon believed god is a concept by which we measure our pain. Marx said religion was the opiate of the masses and a carrot that the rich dangled in front of the poor. Even Hitler was a Christian.

The Catholic Church was the scariest place, the ultimate in creepy. The dimly-lit aisles of hard wood benches, holy candles for the dearly departed burning along the walls. Arched and vaulted ceilings that seemed to reach for the heavens, weird-colored lighting from stained glass windows. Confessional boxes that looked like medieval phone booths with a direct line to the lord. Eerie statues in every corner. Upfront was the life size Jesus made of painted plaster, hanging on his cross. The smell of incense mixed with odors and stagnant holy water where bacteria thrived and multiplied. I’m sure a lot of diseases came out of those holy water dippers.

I don’t even want to get into the strange priests babbling Latin and unnerving nuns swinging wooden rulers. I may have repressed memories of physical and/or suppressed sexual abuse. But maybe I don’t remember. The eternal struggle between good and evil is relative to who and what you happen to believe in and what part of the world you’re born. Muslims believe their god is the true one and Mohammed is his mouthpiece. Christians believe in Jesus and how he died for our sins on a cross. Mormons believe in a god that a guy named Joe Smith found in gold tablets in his backyard. Buddhists believe in Buddha. I believe in many gods, good and bad. The book of Mormon, the Holy Bible, the Koran, the Torah, all the word of god, all very different yet the same. It gets confusing. Everyone has a god on their side of the fence; all the others are wrong and false enemies, null and void.

With all that fear of god and parables of damnation in hell if you disobey, the almighty one could strike you down quick. That’s what they taught us. God is merciful, and forgiving. Just don’t piss him off. What is the perfect god formula? Is god an invention of a simulated reality we live in? Could god be a sexless space alien? How about a giant computer that runs the world and keeps constant vigilance on everyone? Maybe god’s like a gimmicky novelty toy, a magic trick to amaze, amuse, and distract. The craze that sweeps the nation. God is everything and nothing. The great equalizer and common denominator of all that is sacred and holy. The righteous constantly preach the religion of great sacrifice and the sacramental stories of fabled saints and legendary sinners. No offense to all you misogynistic white power neo-Nazi macho guys but maybe god is a woman, a black man, an Indian chief, or a butterfly.

Anything’s possible in religion. There are fundamental rules and if you break them you’re a sinner. Eternally screwed unless you atone, bow your head and beg on bended knee. You get a one-way ticket to a place of fire and brimstone. That hot spot called hell. Not the most popular tourist destination in the netherworlds of the damned. Purgatory and limbo are a more affordable alternative for those on a tight budget, who commit mortal sins daily. Sin is easy for career criminals. It becomes second nature but sooner or later you get caught in the act. God’s the original big brother surveillance camera.

In the beginning was the word, and the word was with and of god. So these words are god, and this computer is god, and you and I are god too. And at the same time god created the heavens and the earth. God was very busy creating stuff. He put his creation, Eve, into the Garden of Eden. He made Adam to get it on with Eve. Things went south fairly quick. Something to do with forbidden fruits, serpents, and the devil. It didn’t work out and they were banished from the garden to wander and begat and begot. This is the party line that the big TV evangelists scream about in their fiery sermons. These zillionaire televangelists who broadcast from stadium-size arenas on their own networks. These men of god who pay no taxes. The same ones who claim to help the poor and suffering masses. Much like the consummate politician, these charlatans, frauds, con artists, grifters, chiselers, gougers, scammers, defrauders, swindlers, these righteous men of god.

They preach goodness and pass the collection plate. That little devil on their shoulders prodding with that pitchfork, whispering, “More for me, bless my soul.” We adjust and mutate to our world. Bob Dylan said religion didn’t necessarily make life any easier. “We need to work out where our place is and who we are. We are all spirits dressed up in suits of skin and we’re going to leave all that behind.” That sums it up. You can believe what you want. Pray to whatever. Mind your own business and hurt as few as possible. Get right with your god. Spread it around.