I don’t have a jealous bone in my body, but I’m getting to know envy very well. 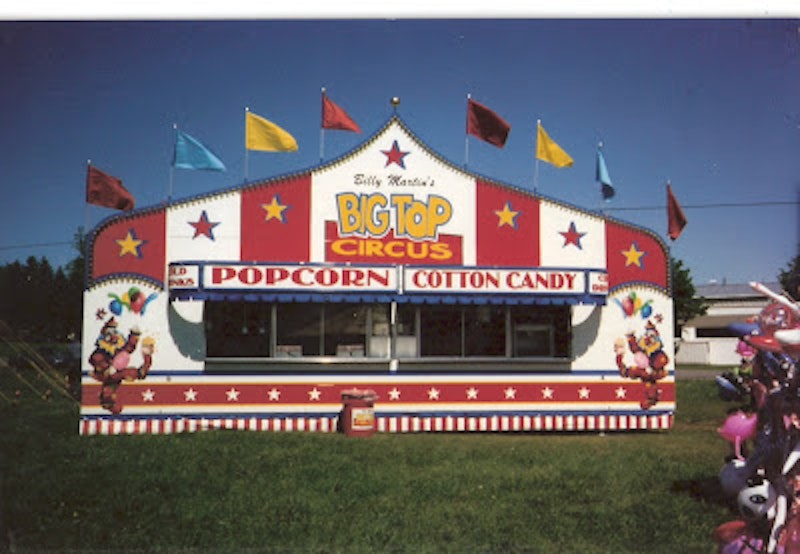 I’m currently in Milwaukee with Circus Una hanging out with a bunch of bikers. My old friend Una Mimnagh describes herself as “a little woman with a big dream.” She bears a slight resemblance to a young Susan Sarandon, only prettier. She has a graduate degree in art history and criticism, and, despite her diminutive size, the strength of two separate gorillas. There’s a crazy streak under that good Catholic girl exterior which I immediately recognized the first time I met her, back in 1991 when we were both working for the Big Apple Circus.

We subsequently toured together in 1996 with the sweetest little circus that ever went bankrupt, Billy Martin’s Big Top Circus. Becoming bored with crew work, she occupied the few idle hours we had with practicing on the trapeze and worked up an act, eventually booking it into small ultra-hip music venues in New York City and elsewhere after Billy’s show went bust.

Getting close with the New York art crowd in the course of obtaining her degree in 2008 disabused her of the merits of the art scene. She’s far too kind to come right out and say it bluntly, but she’s clearly disinclined to associate with effete snobs delicately sipping from glasses of white wine held in their soft money-counting hands. She’s got the hands of a bricklayer. She’s a beer drinker and a truck driving gal. She’s also a Mensa qualifier, but those Mensa people are largely intolerable at the social level. I never joined it, and neither did she.

Una’s a little nuts. She built a highwire rig sturdy enough to hold a light motorcycle with a trapeze attached to it and modified a Yamaha dirt bike which she christened “Cordelia.” It looks like something GWAR would like, it’s totally Mad Max. She recruited two other gals of extraordinary bravery and strength and took it on the road. As Ridley Scott so recently reminded us, big things come from small beginnings. Cirque du Soleil started out as a troupe of street performers.

When she offered to let me come along for the ride from her home base in Hershey, Pennsylvania to work a Full Throttle festival at the Harley Owners Group Rally next to the Harley Davidson Museum in Milwaukee, Wisconsin, I jumped. With my misanthropy raging off the scale owing to the idiocy sweeping the nation, I figured it might help if I disconnected from the Internet for a week and paid attention to something that really matters instead of the divisive fear-mongering bullshit that passes for news these days. I’ve become something of a recluse in my dotage, but watching three strong beautiful women fucking around with a motorcycle on a wire is serious stuff. Biker culture appeals to me. I like people who live by a code.

Una quit smoking 15 years ago and nobody has ever smoked in her truck. She aims to keep it that way. It was a 750-mile straight shot with very short breaks. After a few hours without a cigarette, my aura becomes a whirling cloud of razor blades. My mantra on this adventure is “strive to be kind,” but that’s really a stretch for me under the best of circumstances. I didn’t bite anybody, and we got here in just over 14 hours. She dropped the trailer containing her equipment off at the site, and we checked into the Days Inn on 6th St., practically a stone’s throw from the Harley Museum. It’s pretty swank for a low-budget motel, and even has its own bar.

We got up early and headed over to the site. I’m a total cripple at this point owing to the spinal injury I sustained because Motley Crue’s stage manager is a total moron. I still resent getting injured loading in a band I hate. I hope they all die in a plane crash. I need a cane to walk, and even with the cane, I walk like Dougie Jones from Twin Peaks. I can’t lift anything heavier than an 18-pack of Pabst in cans. I’ve never actually just sat and watched a crew load in a show before. I don’t have a jealous bone in my body, but I’m getting to know envy very well. Those women got that very elaborate rig up in slightly over four hours.

Una has cultivated a solid relationship with Mike Ballard, the visionary genius who created the Full Throttle Saloon in Sturgis, South Dakota, the largest biker bar in the world. It can hold 15,000 people. I haven’t met him yet, but intend to before the week is out. He’s taking the Full Throttle action out on the road, with all manner of crazy acts and solid live rock ‘n’ roll, sort of like a smaller biker version of the Vans Warped Tour with a much broader age demographic. Additionally, and most importantly, admission is free. His revenue stream derives entirely from booze and swag.

It’s an impressive concept, especially when you consider that concessions sales are the real profit generator at most ticketed venues. He’s a champion of working people, and out to deliver a good time that any working stiff can afford. It’s just taking off, but if this guy persists, I could see him eventually giving Live Nation a serious run for the money: the main difference is that Ballard isn’t ripping his customers off. From what I’ve gathered, he’s much like Bill Graham that way. The world needs more Grahams and less corporate bullshit.

The whole thing is wild as hell, and it’s parked next to the Harley Museum through Saturday. If you’re anywhere near Milwaukee, it’s worth checking out. Circus Una is performing on the odd hours from 11:00 a.m. to 7:00 p.m. If there’s a cure for misanthropy, Michael Ballard and Circus Una might just be it. I’ve gotta meet this guy.