Lonely is as lonely does. 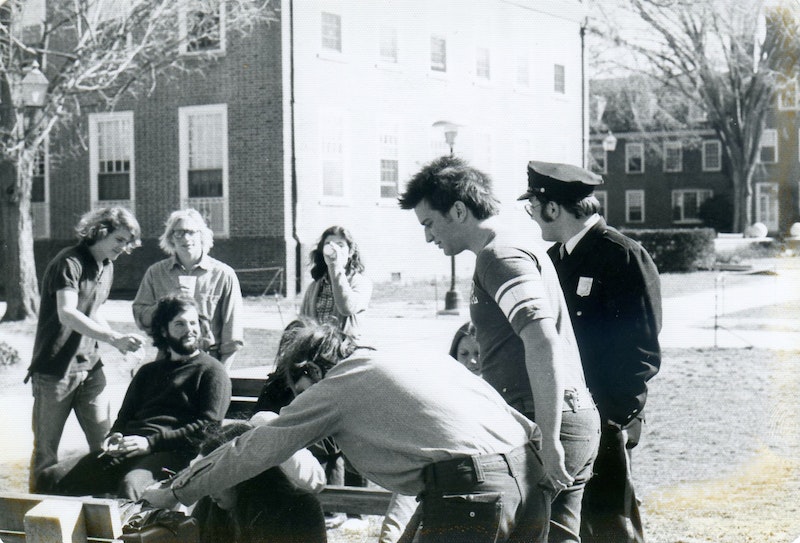 Mercifully, the cliché “first-world problem” has, at least temporarily, receded from common parlance, both on social media and in general conversation. Nevertheless, New York Times op-ed columnist Frank Bruni last Sunday indulged, however well-intentioned, in writing about the problems that college freshmen face today. He begins: “Across the country, college freshmen are settling into their new lives and grappling with something that doesn’t compete with protests and political protests for the media’s attention, something that no one prepared them for, something that has nothing to do being 'snowflakes' and everything to do with being human. They’re lonely.”

Bruni, who writes about higher education fairly often, cherry-picks a couple of quotes from students at the College of Charleston and U.C.L.A, as well as several mental health counselors to make his case. It’s not convincing. One, going to college is a privilege that not all young men and women in America are able to experience, for lack of money or qualifications. I’m betting that those people left behind would gladly be “lonely” in a college dorm rather than getting stuck in a dead-end job or falling into bad company on the streets. Two, while the advent of social media in the past generation, where kids can be imaginary stars on Facebook, Instagram, or YouTube, is a relatively new phenomenon, it’s not as if “loneliness” from leaving home and joining the fray of complete strangers and, depending on the school, demanding schoolwork, is anything new.

The U.C.L.A student, Clara Nguyen, tells Bruni: “It’s a lot more difficult to make friends than people make it out to be. I didn’t know how to be someone new while at the same time being who I always was.” No disrespect to Ms. Nguyen, but that doesn’t make a lot of sense. It falls into the psychobabble patch. Why would anyone feel the need to “be someone new” upon entering college? In addition, Bruni says that the “estrangement” from all that’s familiar is often a “gateway” to binge-drinking, over-eating, and other “self-destructive behavior,” which I assume means promiscuity and smoking or swallowing any number of drugs.

Bruni went to college in the 1980s and doesn’t let on whether he was lonely or not, but does say that social media is the, ahem, “game-changer.” Maybe, but probably not. I went to college in the mid-1970s and, for the most part, had more fun and developed more meaningful relationships than I had until that point in my life. And I dug high school. Forty-four years ago, my brother Doug drove me down to Baltimore, where I’d begin a one-week orientation program at Johns Hopkins. I had help bringing my belongings—a trunk and two boxes of books and records—from a welcoming crew of sophomores, in my case a fellow named Joachim Blunck, who became a lifelong friend.

We found my Alumni Memorial Residences room in Griffin House, a tiny, cinder-block unit for two that was probably the size of suite bathrooms at more posh schools. Unlike today, when incoming students “meet” their roommates via Facebook during the summer, I’d no idea what mine would be like. I filled out a form the previous June, saying I was an English major, smoked, and was a huge Bob Dylan and country-rock fan. As it happened, that matched me with a very cool guy from Houston named Mark, who shared those same interest. We hit it off right away, comparing favorite Dylan and Byrds albums, and then ventured out to the freshmen quad, where there was a lot of beer and other new arrivals meeting each other and trading backgrounds. (The picture above is from an impromptu bash one spring day in 1974 on the upper quad.)

It was a party: and I can say with complete honesty that this was a happy bunch of people. Most were from the Northeast, and boarding schools, children of more affluent parents than my roommate or me, but that didn’t matter a whit. I was fascinated, while sharing joints with this or that person, learning about their lives in Massachusetts, Pennsylvania, Maryland, New York, or the occasional stray, like my roomie, from a long distance away.

The previous spring, after acceptance to JHU, my high school friend Howie (an incoming pre-med) and I took the train down to Baltimore to check out the campus. Almost immediately, two fellows, Mark Borsi and Billy McKey, correctly identifying us as future classmates, took us under their wings, allowed us to crash in their rooms, and showed us a great time. Borsi even wrote me a couple of letters during the summer, saying he’d “have my back.” (And he was true to his word: when Mark and I got jobs as parking attendants at the Hopkins Club, which included dinner every night, Borsi intervened with Dean Fitzpatrick, and greased the wheels for us to get a full refund on the dining plan.)

Obviously, there were some low moments, as in the lives of people at any age, and I guess in my case, it was when the prospect of reading a 700-page book each week—just for one class—was overwhelming. I’d procrastinate, write letters to high school friends at other schools (mail call in the dorm’s main wing was a highlight) and hunker down to work. I also had a bad case of acne, which could be dispiriting. And I’m certain that some of my friends, and classmates, experienced periodic depression, but there was no on-campus center to address that, just a small nurse’s station.

Additionally, I realize it was a different time: Hopkins had switched to co-ed just a few years earlier, phone calls were expensive, atrocious behavior with girls, often at frat parties, was abundant, and if you were gay, that was a whole different ballgame. I can’t even imagine how those students coped. But you’d think, given the wall of protection (over-protection, I’d venture), afforded students today, acceptance of peers no matter what sexual orientation or race, and more enlightened views of gender equality, would make things easier.

Bruni writes that some of today’s students feel cheated they’re missing “the time of their lives.” Before I left for college, my older brother Jeff visited to give me a “few pointers” on college. Jeff was always a riot, and we had a ball, but one tidbit of advice stuck with me. He said, “People often say that college was the highpoint of their lives. If that’s the case, you’re in real trouble!”